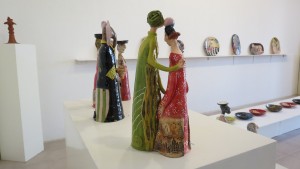 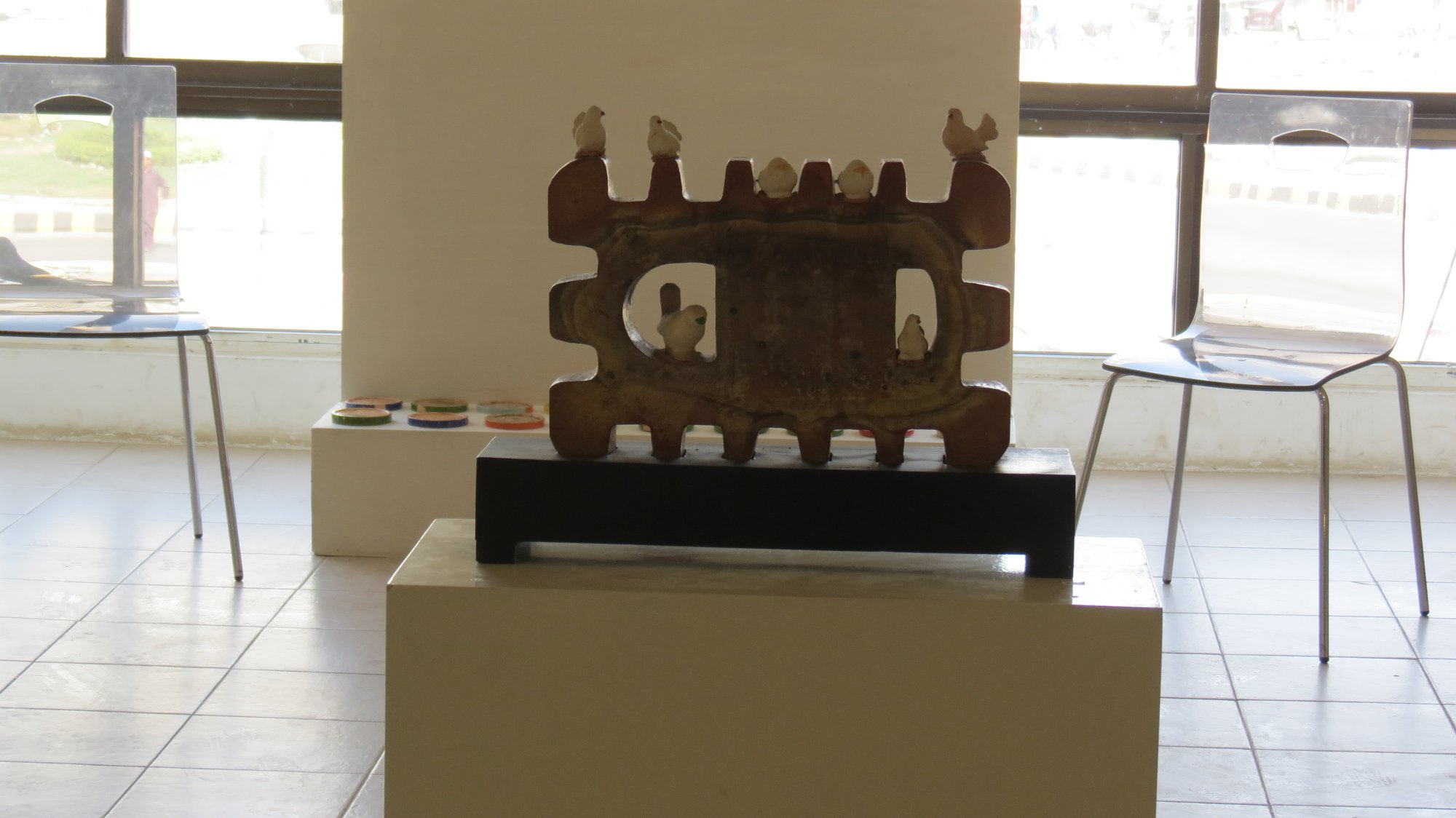 Vagueness between the modern and the contemporary

“Modern Contemporary” is a tricky title for an art exhibition. Quite simply, modern art peaked in the twentieth century and championed experimentative art free from traditional associations. Major modern art movement originated in Europe and later in North America. Contemporary art is globally spread; since late twentieth century, artistic experimentation recognizes no bounds, encompassing diverse media than before. Thus, the title “Modern Contemporary” intrigues us. Is the Contemporary art modern here? Or does the show aim to exhibit modern and contemporary works? Further, how does a two-person exhibition play out with two such dominant art styles? In any case, senior Pakistani artist and Karachi based Riffat Alvi and Bahrain based young artist Aliya Husain Ahmad come together to present their distinctive use of clay and ceramic in this show, held at Art Chowk gallery in Karachi.

Previously, self-taught Husain has told us many stories through eccentric characters modelled in ceramics in her first solo show held at Art Chowk in 2018. A year later, the artist maintains to weave similar imaginative webs through painted clay figurines, vases, plates, and even coasters. Yes, functionality is important for Husain whose artworks can also be used within interiors.

The figurines immediately remind one of the archaeological artifacts from eh ancient and very developed Moen-Jo-Daro in Sindh. Dainty and imperfect yet complete, Husain’s men and women are placid, peaceful, and contained. French Beard is thirteen inches tall; with literally a French styled, modern beard on his visage, he has wide blue eyes that gaze at you quite intently as he composes himself in an upright position. Clad in a textured red robe, a hatched earthly-toned shrug over his shoulders hides his arms. He is not alone in this display, Fat Lady is About to Sing, and Girl with Long Braid also accompany him as free-standing solo figurines. Draped in a bottle green gown that slightly reveals her shoulders, The Fat Lady holds a pot as she looks ahead, while the Girl with the Long Braid stands with her eyes closed, also clutching a pot.

Husain figurines are poised, to say the least. A traditional medium such as clay reminds us of civilizations past, yet they have modern beards and pose to sing like sopranos. The artist builds stories from her vision and experience and projects them onto clay. Immediately, the objects appear simple, yet they are loaded with textured marks, hatches and rich color that add depth and maturity to her work. Art, function, and craft fuse as they lose their conventional artistic associations, thus the traditional medium becomes modern in Husain’s hands.

Yet, I find it hard to classify the works as modern or strictly contemporary. And I say this because the title of the show makes it a point to allude to these powerful art styles and movements. Contemporary art is cutting edge. Modern art is bold. Husain’s ceramic figurines, plates, and vases float between these associations, creating a complex zone to critically label them within a category. This is not saying that all art must always be labelled or categorized. However, for a strong show title, works looming in and out of styles without having traits fitting them into any specific genre present us with futile vagueness.

Well renowned artist and sculptor Riffat Alvi’s Conference of Bird series completes this vagueness. Alvi’s first solo show was held in Karachi in 1987 when Pakistani art scene was balancing itself between the revival of the traditional and the continuity of the modern. Alvi’s break-through came when she used the “earth medium”, a pigment she derived from soil mixed with resin and oil binders for application on any medium. Since the past three decades now, Alvi has created earthly toned ceramics, wood works, and paintings in acrylic, oils, graphite and mixed media that draw from the artist’s perspective on spirituality, individualism, and introspection. Her artistic trajectory has progressed significantly over the years; from the much-acclaimed Tayammum, a spiritually rooted artwork created with strong hues of earth pigment on wood in 1996 to the many neutral toned variables in the most recent Conference of Bird series.

Conference of Birds are many individual pieces of ceramics that contain numerous elements within them. In one rectangular piece for instance, that is almost three feet tall and a little more than a foot wide, with grayish indigo and yellow hues, reside seven tiny cream-colored birds. Two birds linger within an empty sill created on the top left of the open and front facing box as two more sit on a tiny shelf created in the lower right of the box. At the bottom border lie three more birds, thus bringing the visual arrangement to a full circle.

More works within the series chronicle Alvi’s fascination with bird; serene and powerful but ignorantly considered inconsequential with their presence. They loiter within rectangular structures, perched at sills and spaces that are created between the ceramics. Viewing them is like being surrounded among many people, occupying space in every public and many private settings yet still instilling loneliness and emptiness. Conference of “Humans” would have been a suitable title for Alvi’s conscientious series of big and tiny birds, and bird houses.

In the forms of birds, figurines, or as human silhouettes on glazed plates and coasters, one may conclude that the show is inevitably about humans.