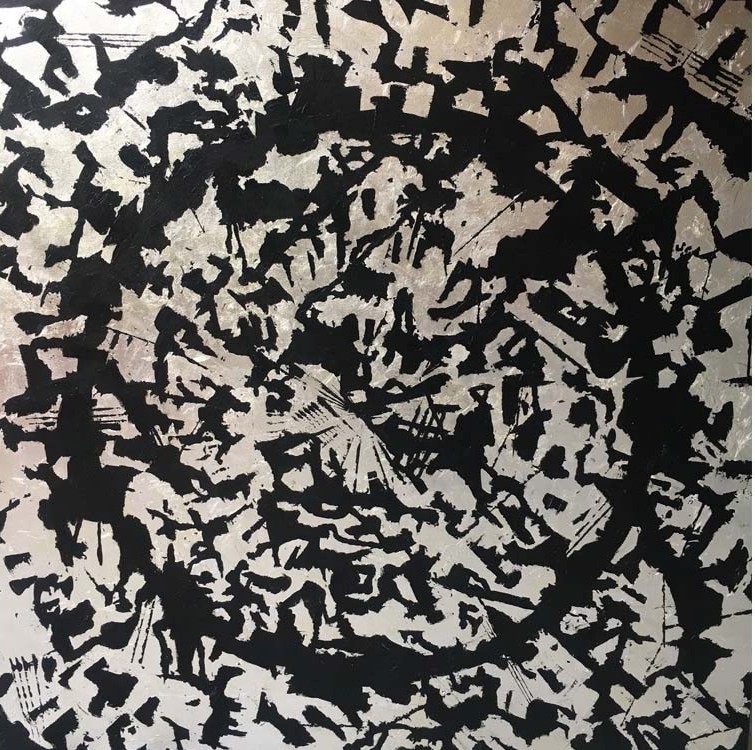 Vagaries of a non-objective mind

Together We Stand Alone
From Here to Beyond
Lucid Dreams

A two-person show titled ‘Vagaries of a non-objective mind’ opened at Full Circle Gallery, Karachi. Ujala Khan and Makhdoom Sadiq Khan displayed their artworks and each one of them possessed idiosyncratic detailing and were peculiar in its own unique way.

Khan composed a number of artworks in which she depicted this world as an experiential place where an individual lives different phases and experience peaks and valleys of life.

The use of bold and strong colors created psychological inclination that, according to Khan, can play a crucial role in catching the mind of a viewer in cognitive discourse. The unshaped lines and unpredictable shapes merged the work with abstraction to an extent where reality met imagination.

“It started out as a therapeutic exercise and progressed into my profound enthusiasm to encourage my spirit, as though there was a missing piece in a puzzle,” Khan stated, “I would never push my own beliefs. It tries to keep my work open-ended and subjective with unconstrained self-articulation, allowing the viewer to interpret it their way.” She added.

One could observe a few paintings, like ‘Mercury’, seemed busy due to the fine placement of gold and silver leaves on acrylic and enamel medium creating distortion and exaggeration.

Khan tried to trigger the emotional responses of viewers through her work and allowed them to connect to their own experiences of the places they have ever been to or the backgrounds they belong to.

“Khan’s work focuses on interaction and interpretation that evokes memories which you have in your mind but they are dumped down somewhere in your brain so her colorful paintings evoked those memories and I can relate some of her paintings to my life” a visitor expressed.

The art pieces were named after the well-known places of the world like Japan, Saint Petersburg, Beijing, and many others. It noticeably carried the idea of Khan to indulge one through her paintings to observe what one sees in the work, connects to the memories and interprets in his/her own way.

“Despite the suggestive titles where one can clearly form a connection or memory by the composition and colors used, my work is unbound by a particular structure. Moreover, it’s deconstructed to the extent that meaning is shifted and is manifested to a more intricate interpretation of the viewer.” Khan stated.

Sadiq’s work revolved around his personal encounters and emotions which are named but not seen. He flawlessly used the colors that could express happiness, concern, empathy, anger, pain, hopelessness and other emotions that one feels once in his/her lifetime.

He expressed his feelings for unseen objects and creatures through his work. In one of his pieces titled ‘somebody is worried and thinking’, he highlighted the distress, anger, chaos and oppression one feels when going through a worrying time of life. He used dark hues to create complexity and profundity in his pieces to overstress emotions of an unseen.

On a closer inspection one could observe the figures, like an unknown face or a scarecrow, and unshaped lines, created with dark colors, according to him, was a representation of unnoticed emotions of an unseen being.

“People do art, especially painting for many reasons of their own. I do art because I have an inner drive for it and I want to express my feelings for the unseen objects, feelings, connections, creatures etc. through it”.

In another painting titled ‘A strange flower’, Sadiq painted a flower with irregular petals in oil medium in which he showed the unusual shape of a flower yet he used bright colors to depict the beauty of the flower.

The artist used different techniques to paint usual things, which we every so often ignored due to not being an extraordinary or gripping object to us, and emphasized all the veiled emotions and beauty; let it be of a human being or something related to nature, and tried to translate his imaginations in the form of paintings.

“I am a very sensitive person, I get happy quickly and I get extremely sad at the same time, it’s all tough for me to explain. I paint feelings that I have gone through like my subject “Broken”. All my paintings have something real and something unseen that is why I call it all “Living and the unseen”.

Abstract art is believed to be the most comprehensive form of art to express emotions in a boundless manner. An abstract work invites a viewer to interpret the artwork their own way. It requires one to get deeply involved in art and understand thus one can understand it. But the urge to understand this form of art in a hurry usually ends up in lack of interest towards it.

The deeper one tries to dig into the meaning of an abstract art, the more one gets closer towards the story hidden behind multifaceted strokes and uncertain figures.