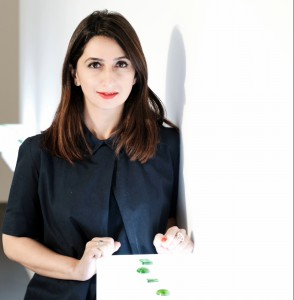 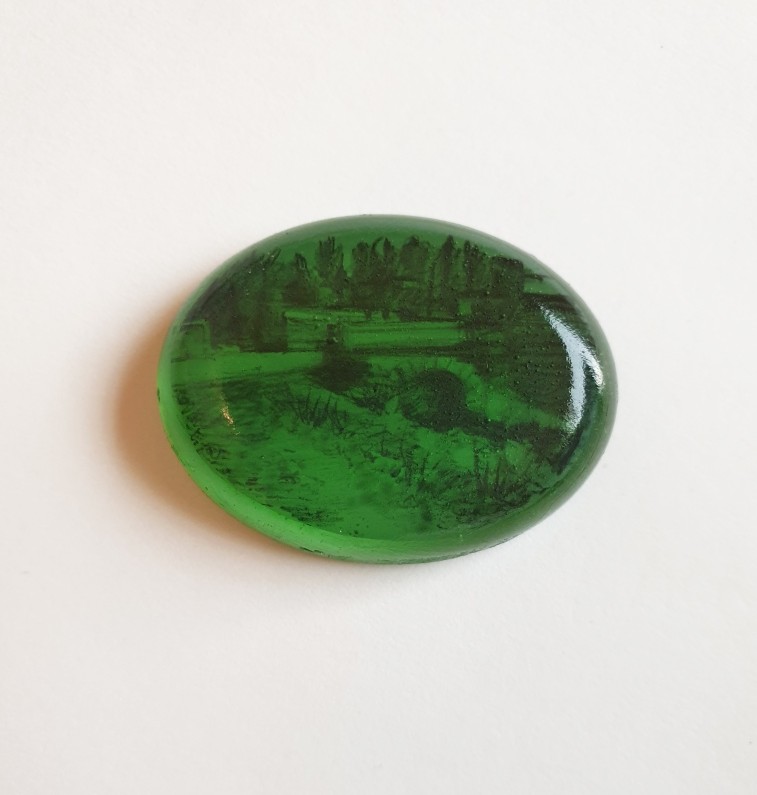 Saba Qizilbash is a Dubai based artist who explores themes that tackle the complexity of identity in relation to geography by looking at infrastructure, borders and crossings. A graduate of National College of Arts, Lahore (1999) with a Masters in Art Education from Rhode Island School of Design, Qizilbash has exhibited extensively in Dubai, Pakistan, India and USA.

Her meticulously executed paintings and drawings are rife with detail that seamlessly blends images of trees, bridges and architecture. Resembling utopias of modernity that showcase man made prowess, her compositions seem to be devoid of context, location and most importantly human presence.

Her older works used fabric and clothes devoid of the body or face as a motif to draw attention to historical conflict and carried undertones of themes of separation embedded in a history of violence.

What are these imaginary spaces that transgress logic, history, beginnings or borders but are highly charged with the politics of identity?

Qizilbash discusses and addresses these questions amongst many other pertinent concerns in this interview:

ZM: Your “Cultures” (2016) series references two basic motifs, geography and the body. There is a sort of marking of territory and its incongruences are highlighted in this process. Can you elaborate on why and what your concerns were as you executed this series?

SQ: The ‘Cultures’ series began after I concluded a very large painting that took over 9 months to complete. The formal language that I was employing in the painting was far from the larger concerns that weighed on me at the time. I decided to put away my brushes and go back to drawing. I realized I needed to work in a medium that allowed me erasure, layering and excavation. I had been obsessing over the visual of a starchy white dress shirt that is the staple of a white collar worker. Always ironed to perfection and hung in a clean closet, one never chances upon it discarded by a road side. I would enter my studio early in the morning, position myself in my work station, then take a white dress shirt, crumple it and drop it to the floor. I would then sketch the shirt observing the position the shirt would land on the floor. I made over a hundred of these drawings. In each drawing, the entangled sleeves would create a forensic language describing how the shirt had fallen victim. I gradually began to draw these fallen shirts looming above and against dark landscapes and abandoned spaces.

ZM: There are references to land and borders/demarcations. The work is very somber. Do you think this series carries political overtones?

SQ: Most definitely. I was thinking about victims of religious extremism and how they are often the only witnesses to the crimes against them as people rarely come forward to aid in the prosecution of members of these so called ‘banned (yet openly supported) outfits’. Disembodied, weightless and unbearably light, these figures began to direct my gaze to all sorts of scenarios and landscapes that I consider unsettling. At the same time, living away from Pakistan, having packed my family home, it became a bit of an obsession to find walkable routes back home. To exist between two countries, to have homes in inaccessible places (my husband’s family home is in Srinagar, India), I couldn’t help but think about No Man’s land as a backdrop for my narrative.

ZM: There is a layering of time and space in your “By Land” series. Layering and temporality is a concern that was also evident in your Empress series but these works are rich in detail. They encompass the viewer. Land and travel is important here. Can you elaborate on your concerns and their development?

SQ: The ‘By Land’ series consist of resin coated graphite drawings, tiny stamp sized sketches and large triptych landscapes. Land travel, time and space are all key themes in my larger works. The works usually start from a point of curiosity – I will come across a news item on a land dispute or an update on an ongoing cross-border negotiation and begin my research. It takes me many weeks to understand a conflict and read up on the towns involved, their pre-partition histories and in present day conditions. Then comes the part where I scavenge for images, canvassing/ sieving through entire districts to pull out old stories, myths, iconic structures, historic buildings, bridges, highways, canals, dams and weave them back together as they make sense to me. It’s always important to me that the routes I create be walkable and accessible by land and that each tree, green belt, shrub that I draw native to the region.

ZM: There seem to be no human figures in any of these works, these spaces are like ghost towns. Simultaneously they also seem to read like a homage to modernity or technology. Was that your intention?

SQ: There is an attempt to visualize a society that exists between Utopia and Dystopia. I turn my gaze from my watchtower in Dubai to scan the region and the view point I always take is that from a landing plane. I can see the houses, bridges, highways, tiny cars moving about but never the people. Eliminating people from my landscape also allows me the license to manipulate the scale of certain structures in favor of the other. I tuck away the people almost in preparation for a fumigation of sorts.

I made two drawings based on the Kartarpur corridor – one in 2016 and the other in 2019. In the first drawing titled: Kartarpur to Dera Baba Nanak, the stumps of the bridge that existed pre 1965 over River Ravi can be see with the gurdwara in the distance. In the second drawing that I made earlier this year, I visualized a footbridge that connected Kartarpur to Dera Baba Nanek. Earlier this month, watching the first wave of Sikh pilgrims walk through the Kartarpur Corridor was such an affirmation that the hemming of divided land is possible without denouncing or shifting borders (which we all know is impractical and close to impossible).

ZM:  In your “By Land’ series I feel like you are referencing 18th century Daguerreotype photography with your specific use of certain frames/shapes of the works. What is the role of the choice of frames in your work?

SQ: Daguerreotypes are exposed on silver coated copper plates and have a reflective finish . If you have the opportunity to hold one up close in your hands, you will see your own reflection while viewing the photo reference. Similarly, in my resin coated graphite drawings, you also see your own self reflected in the landscapes. In my recent drawings that I have made on mylar and cast in resin, I have embedded them in copper, pewter, silver bezels – similar to 18th-early 19th century framing of daguerreotypes. The most obvious intention is to reference the past and that even a specific time – pre-internet, icloud, usb era. When the clearest proof of tangible memory was this form of documentation. Much of my fascination with this type of framing of an image is also based on the Partition in which people on both sides of the line were forced to choose between a handful of belongings to carry across amid wide spread violence, plunder, abduction and looting.

ZM: Does your role as an art educator help or contribute to your studio practice?

SQ: I have been teaching Freehand drawing for the past 12 years, both as a foundation course in a BFA programme as well as in a community setting. I definitely think my studio practice contributes to my role as an art educator more than the reverse. I follow a strict studio routine complete with rituals and superstitions and stress the need to draw to my students constantly. This semester I have been teaching Studio Art Seminar which aims to prepare Studio Art seniors for a professional life. Teaching such a course can prove to be very self-reflective and autobiographical.

ZM: As a practicing artists residing and working outside your country, what do you think of the trajectory and development that has taken place so far within art in Pakistan?

SQ:I enjoy 99% of what comes out of Pakistan. Whether it’s the food, music, performances, drama, humour or art. I do view myself as a global citizen, having lived in UAE for more than 22 years and a few years in California and New Delhi. However, in my art mind, my audience remains in Pakistan. In the same vein, I enjoy immensely the freedom and resilience many emerging artists in Pakistan display in making works, in spite of social constraints, issues of censorship and lack of local fellowships and grants.