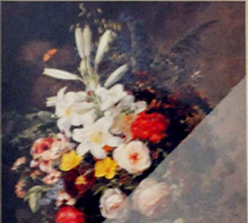 Fatima Munir’s show, ‘Unnatural Selection’, opened at Canvas Gallery on 22nd October, 2019. This show comments on the unequal and unjust treatment given to women in our patriarchal society and how living in this culture is no less than living on a battlefield.

Rather than blatantly talking about matters that upset her and directly expressing her opinions, Munir practices the technique of symbolism – subtly using ordinary objects to speak about greater issues. In this show, she uses flowers to represent women. The idea behind this is that women are no different from wallflowers; they are expected to sit and look pretty even after being burdened with and placed under endless societal pressures and demands.

Instead of being allowed to complain or protest, they are forced to stay ‘subservient, meek, and to accept the status quo as their worth is rubbished and censored in the unnatural selection of sexes’. This discrimination is agonizing and the fact that it has been passed down through generations and still exists in present times proves man’s ignorance and rigidity.

This exhibition continues till 31st October, 2019.