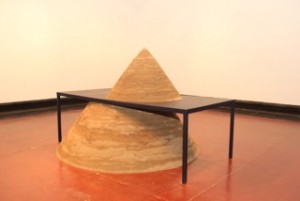 A similar situation occurred on 3rd May 2018, at the Zahoor ul Akhlaq Gallery, when in front of ‘Therapy’ by Suleman Faisal, a few artists, teachers and students were trying hard (in vain) to guess the plight of fish, in an aquarium being (mechanically) hit by a small hammer. The installation was part of ‘Transition in Time’, curated by Nausheen Saeed that included works of 7 artists (all trained sculptors). The most interesting aspect of this exhibition (held from 2nd to 10th May 2018) was that each day a different artist’s work was installed in the gallery, so the group exhibition – in reality were seven solo shows held one after other. The idea, unusual in our midst kept the interest of viewers – and participants alive for those seven days.

But let’s talk about the concerns. Some spectators’ concern on the state of fish with constant hammering on the outer wall of aquarium was as superficial as those who express pity if an artist sacrifices a chicken for his/her artmaking, brings a tree inside a gallery space, slices a cow in half, puts a tiger shark in a box filled with formaldehyde. Their disgust is reduced to art only, because they become oblivious to billions of cows and chickens being slaughtered every day to prepare different dishes; trees cut to make furniture, killer sharks hunted in deep seas.

Actually they fail to understand the content of the work, which in the case of Faisal was about the fate of a specie that is trapped, and could be freed any moment. Hence the sound, more than being a nuisance (perhaps not much different from the sound of loud music in a room) is a possibility towards freedom. The paradox felt in his work, was observed in the work of Umer Nawaz too. Titled ‘Iron Pipe’, the work consisted of a gallery plinth – fabricated in metal, with the title of the work inscribed on top. A pedestal of that dimension is normally preferred for displaying work inside a gallery, normally to place a sculpture on it, but in Nawaz’s work, a support item, actually becomes the work, thus dismantling the distinction between ‘art’ and ‘non-art’ – or art and life.

The difference in art and life was also addressed by Sarwat Rana in ‘Love Vine’. A small dry tree with entangled vine was fixed in the middle of the gallery, along with a bench on one corner. The work, if transformed the cement floor into fertile field, at the same instance it became a metaphor for relationship, accentuated by the bench for two. The use of natural substance, diffused the difference from outside to inside: Nature and manmade environment.

Similar concerns were addressed in the work of Jamil Baloch, called ‘I Am the Best’. The artist fabricated a mountain with its carefully observed surface detail in fiberglass, and then cutting in the middle to reveal multi-coloured stripes painted on both sides. The dark, charcoal, scorched outside in contrast to lines of paint inside could be read as a symbol of a human being, perhaps one who comes from the artist’s home province, Baluchistan. In appearance a tough guy, but deep down a softie. Or a narrative about the land, mostly mountainous and barren, yet able to produce some of the rich art, craft: Poetry, pottery, painting, music, rugs, textile etc.

The link between nature and culture, was investigated in the work of Ayesha Zulfiqar. Titled ‘Untitled’, the installation conveyed the artist’s concern about the power of mankind over the power of nature. A mound of earth formed in a perfect cone was slit through a large blue steel table. However more than merely a debate on two aspects of our existence, natural elements and fabrication of products, the work embodied a formal sophistication. When one says, the cone of earth was sliced, it was a statement made from one direction, because on moving one realized that the upper part of the cone is not placed on top of the lower half, instead it was shifted. The artist dealt with the reality and perception. Facts and fiction as both can be deceptive when we are seeking reality, no matter the reality of art, reality of life or reality of imagination.

The other two participants of the exhibition focused on aspects of reality that are crucial and critical in our circumstances. Seema Nusrat fabricated large scale diary pages, joined with spiral binding that contained shapes of buildings in black. In a sense ‘Containing the City’ was a three-dimensional page from her sketchbook. The haunting scenario of buildings’ shapes against a grid, spread on three sections of the work, rekindled a sense of alienation. People often tell you about a city, its characteristics, but all based upon their cursory contacts and brief experiences. These personal recollections contribute to create an imaginary place, same and opposite at the same instance.

The concept of that imaginary or fantasy city was explored in ‘This is not A Wonderland’, a digital print by Safdar Ali. One came across “montage of mosques and mausoleums, superimposed and clustered, which in its aesthetic resembled to a Disneyland poster/project. The work conveyed how faith – like entertainment – has also turned into an industry.” The artist also alluded to the possibility of art, which can extend the limits of our routine existence. Like the whole idea and premise of ‘Transition in Time’ that altered our perception of a usual exhibition, inaugurated one day and then lingers on for a week or more. Instead, each day experiencing a changed display was like getting newspaper every morning, and like newspaper, the exhibition also informed us about us, world and what lies between the two –we often describe as everything.