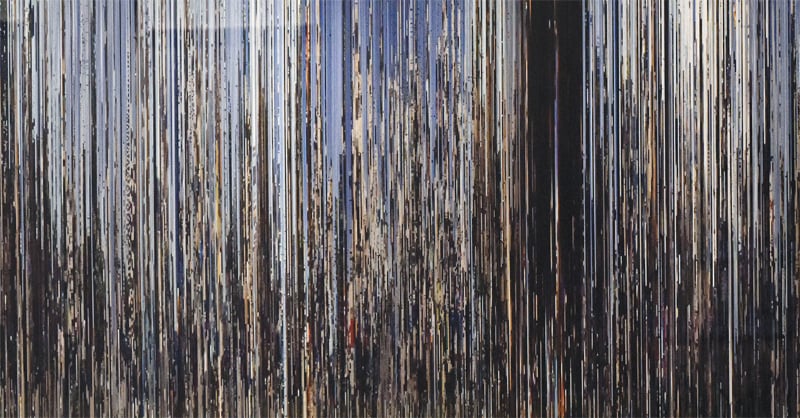 The city has an infallible permanence rendered in concrete and other visceral matter. Like the belly of a incumbent cavalry; rife with steam and soluble serenades. Ripe with bustling verandas and brimming causeways. It is bound to a state of tangibility. The city even in slumber hosts a pandemonium of gargling dust and whispering rust. Locating the city within the periphery of representation mottles the  slippery state of continuity with forced apathy.

Faisal Anwar’s recently concluded show at Canvas Gallery titled Tracing Cities offers a unique manner of capturing the city. The show itself offers an allegorical residue of an aspirational city mediated through a computer-generated algorithm. It operates on an aspirational state, it renders the city as a soluble matter, decomposed and folded into a state of intangible aspiration.

In his work titled Chowrangi, the artist proposes the city as a fluid entity, it dislocates the city and renders it into a meticulously calibrated ambivalence. Its tangible constituents erased and coded into a residual fabric. Appropriating twitter as a host it uses tags to represent the occurrence of data into a pattern. A poignant display of the city sans brick and mortar, but mediated through a human experience limited to 140 characters. It functions on the parameter of a specific genre of the communicated and the communicable, and it is rendered by virtue of it. The algorithm generated unique patterns, much like the city it shifts and arranges itself, but it is a graphic rendition. Like a modern folk tale.

This piece of work was a gallant feat of shifting proportions, rendering the city as a visceral caricature. Placed next to Anwar’s musings of city, where he captures the riot, the color and movement, it becomes poignant residue of the city. He doesn’t fictionalize the city, it is presented realistically. People moving in out of the frames, the traffic flowing at it’s pace. He has presented these as studies of the street.

Anwar’s work is a collection of the city, fragmented and joined together and presented in different form. It visually grasps the viewers as a witness. Like a water body evaporated and condensed, it is in different form but it’s essence is grounded within the periphery of the city.

In his piece titled Intersections, 2-D geometric forms are projected on 3-D cubes, translating their form upon the bare cubes, it is a methodical appropriation of the mediated state. A unique rendition of the city, Anwar’s explorations manifest the visceral state of the city, transfixing viewers with their new-age manifesto.

The city drifts at it’s continuous pace in his works, captured and rearranged, they slip in and out of their concrete state. He establishes a premise for exploring the city through a medium that resurrects the physical state of a the city as a collective cognitive state; it establishes a fluid infrastructure and allows the city to be studied in a different manner.

The city in Anwar’s work is a soluble state of being; it functions as an abstraction, it captures the riot and displaces it and rearranges it using algorithms. His presentation of the city allows for contemplation on the plausibility of the communicated and the alternate infrastructures that can be generated in the age of technology.

One Response to Tracing Cities