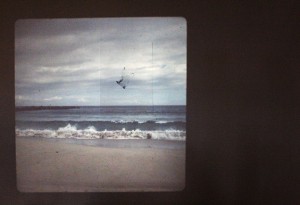 Time, Place and Being

While many may find this aspect of plenitude and its relationship to identity intimidating, Quetta-born Suleman Aqeel Khilji boldly ventured into this subject, as is evident in his exhibition “See View” at IVS Gallery. Loosely interpreted as an investigation (“see”) of a landscape (“view”), the display is a culmination of research and drawing documents produced during Khilji’s seven week long residency at Vasl, Karachi.

At first glance, Khilji seems to move ready made objects (or readily defined) from one place to another and reconfigure their time and purpose. Having been recycled and recombined, use and placement are the main elements during assemblage which immix large quantities of emotions and humanism. And in doing so, he attempts to question the relation of one’s identity to the ever evolving place. After all, landscape is transient and does not hold forever. Home changes. Illusions change. People change. And time certainly moves on.

A screen print of a polythene bag is mounted on a wall accompanied by a still image projection of a seashore. Successfully illuding the audience, the muted image is in fact found and bears uncanny resemblance to Karachi’s seaview. Question arises whether it’s an image projected on a drawing; or a drawing superimposed on an image. Interestingly, the viewer’s mind treats it as a single layer and completes the image oneself.

Taking forth the theory of Gestaltism, Khilji utilizes this idea of visual perception further as he rests a hollow concrete brick on rusted rods. Bearing a vague likeness to Wall E, the piece itself seems to view the viewer. Light projected from the hollow section invites anticipation to some sort of moving image, however viewers ultimately complete the image themselves; and fascinatingly perceive the stark contrast of the white light with the grading tones of the concrete as a landscape in itself. Every viewer paints their individual story on the visible screen.

The concrete block reappears in a drawing on canvas made with oils and sand. Crowning a human head, the brick again mutates into a humanized, voyeuristic form; the landscape vivid in its hollow sockets. The figure itself is an amalgamation of an observation of a volunteer Khilji approached in Karachi, and the visual memory the artist brought of his muse settled in Lahore. This absorbingly assiduous juncture of various elements evokes a thought written by Homi Bhabha. “Remembering is never a quiet act of introspection. It is a painful re-membering. A putting together of the dismembered past to make sense of the trauma of the present.” The seemingly erased, translucent figure highlights the delicate membrane between the real and unreal, which is also reiterated by the process of combining memory with observation.

Khilji believes the landscape around Karachi is mostly subdued; the grading tinges in the land, the sea, and in the sky especially during the rise and fall of the sun were all too captivating for him to not recognize. He further opines it is the ever changing hue of the sky that catalyzed introduction of loud colors around the city – which for him were most apparent in the scattered truck art. Inspired by the city’s dhobi ghat, Khilji hangs a collection of drawings between two found rods. Floating in air, the drawings create a hierarchical narrative. A red heart gradually turns into lack-luster concrete. A dolos hangs in a corner whereas the freshly inaugurated Icon Tower is halved in the center. The vibrant blue of the sky peeks from behind. While the objects become drawings the drawings itself, holistically, become objects. For Khilji, this is a reciprocating collaboration between the artist and an inanimate model. The rods are held by a set of cement blocks  engraved with a series of symbols – the found objects are not only repurposed but also recontextualised in time; manifesting both in the past as well as present.

Having come across a porthole during his previous visit, Khilji was inclined on employing it during his residency. He mentions the particular work was still in process as he would often visit the piece in the gallery to make additions to the painted landscape within the frame. The play of time features again as the object may well be from the past, the work is – perhaps intentional – outwardly futuristic.

The exhibition may best be described as a pit stop in Khilji’s thorough research as he believes he has a lot left to invest and an extensive thought process yet to chase to produce a summating body of work after his residency. A visit to his Vasl studio revealed a series of interviews he creatively documented as well as several observational drawings of the figurative characteristic the dolosse embody. He is amused by the phenomena of how this man made object used to protect mankind from nature on shore is now used to keep the mankind itself away on land. The Icon Tower was another significant recipient of Khilji’s attention. Unavoidable from most areas of the city, he felt he religiously circumambulated the edifice to navigate between neighborhoods – the tower served as his compass. Khilji is more enchanted by its structure which he manipulates in his drawings as part of his continuing process.

As part of the residency program, Khilji not only gave talks and workshops in numerous universities, but also taught drawing to Fine Art students at Indus Valley School of Art and Architecture. Having taught in an institutional arena for the first time, he regularly invited his students in his studio space to critique his work while also partook in the same assignments he instruct during class. A novel experience, Khilji learnt equally from this exercise and found it enlightening enough to conceivably pursue it forth.

Khilji’s impressions of the landscape reinforced the idea of otherness and familiarity in his work. Having had a family construction business in the city, it may not be a surprise that he was drawn to the changing landscape – often caused by a displacement/replacement of people as well as by the disappearance of ways of living. He questions how human occupants are part of the environment – what they extract from nature and what they respond with. Such a social research may trigger thoughts of personal reminiscences; and provoke one to question the unacknowledged class systems, cultural divisions and the balance of power between man and nature – all of which aid in defining our relationship to a place.