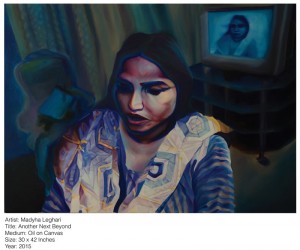 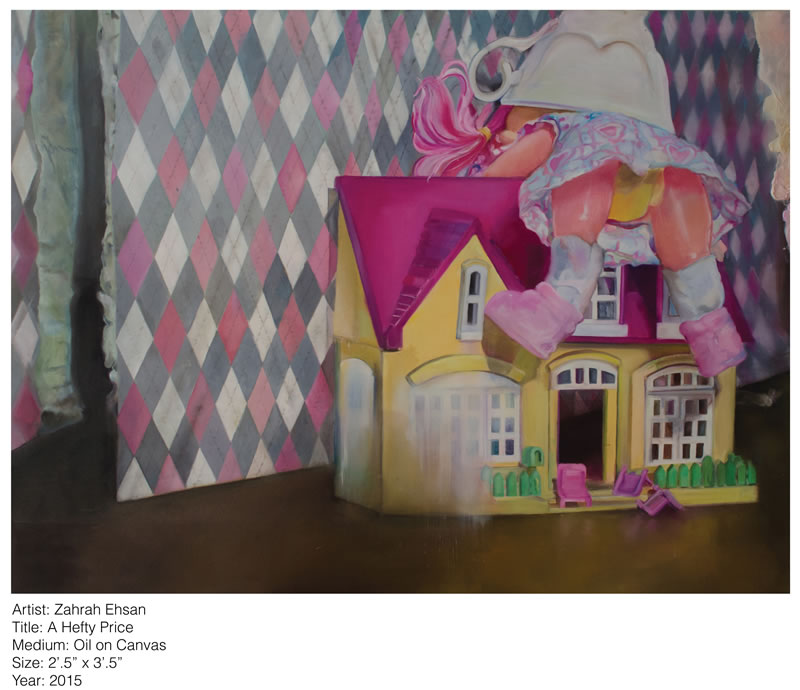 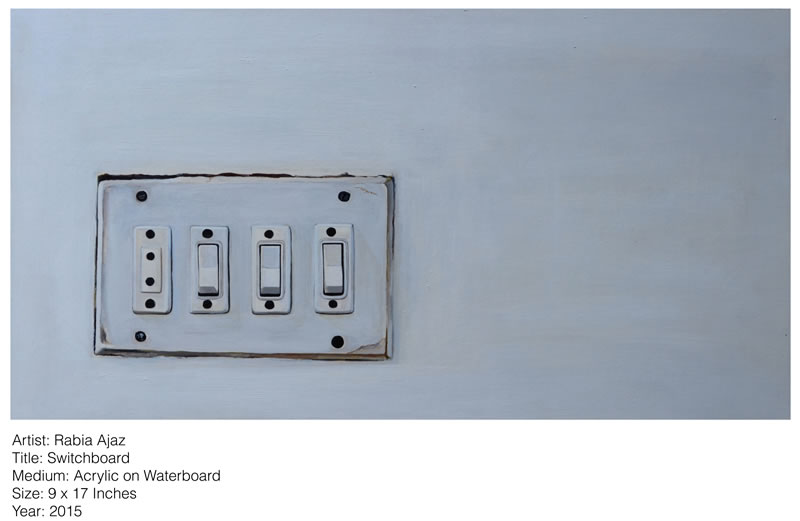 Till Human Voices Wake Us

Canvas Gallery recently held an exhibition of four gifted painters whose works came together to signify a number of pertinent ideas. Titled ‘Till Human Voices Wake Us’, the works combine the ethereal with the ordinary, with their imagery teetering on the edge of a dream state.

Using oil on canvas, in hues of deep blues that seem to depict the quality of a camera on night-mode or inverted colour display, Madyha Leghari showcases her subjects. These include women in ordinary, candid poses, and a stone-faced woman lying facing the ceiling in a room. There is a sense of melancholy in her pieces, where beneath the ordinariness of what is happening in the imagery, the viewer is expected to decipher emptiness and underlying tension, or lack of it thereof.

The meaning the artist attaches to her imagery is along similar lines. Her work speaks of the ‘silence’ that reveals itself when one strips themselves of their immediate concerns and focuses solely on the present. However, this silence can be threatening as it takes away one’s sense of place in the fast-paced conundrum of this world. The use of blue in Leghari’s pieces displays ‘the distance between oneself and another’.

Rabia Ajaz paints regular objects against simple, plain backgrounds. Key hangers, letter holder dolls, various switchboards and valves, a mirror and a hanging cloth are seen in various small paintings in acrylic on canvas. Some paintings of the switches are placed such that they momentarily deceive the viewer as to whether they were real objects or paintings.

By painting these objects, Ajaz seemed to question, or purely acknowledge, the actions of everyday living. The painted objects seem to be those that come into regular use on a daily basis, and in a way shape our day; yet these are the objects we also ignore.

Interestingly, the artist, by painting these objects, focuses on the part of the paintings we at first don’t pay heed to: the walls. According to her, it is the walls that define our experiences since childhood; the switches we are keep away from, the new paint we colour on, and the spaces that are decorated on our birthdays. To Ajaz, her paintings are foremost about the walls that take in our experiences, and that are a ‘sponge for our emotions and the memories of our lives’.

Sanie Bokhari, in photographs on wood and oil on various large-scale fabrics/surfaces, shows a clear interest in cloth. Skilfully painted cloth is seen overlapped with bursts of floral imagery that seem to overpower it, and the curves and folds of the cloth are paid special attention to. In one piece, Bokhari blots out the floral motifs on organza cloth and paints over a woman, sitting reflectively, or in wait, on the side of her bed.

What is Bokhari saying with her work? Does her work have an ideal rooted in the female form, or does it speak of ambivalence in gender roles? Interestingly, the artist’s take is slightly different. Her work emerges from her embracement of her hometown, Lahore, and her existence in the construct of her surroundings and domestic life. By recreating ordinary things on a large scale, she aims to give life to mundane objects as well as give them an altered, intimidating perspective. Ambiguity and contradiction also becomes part of Bokhari’s work as one wonders why the intimately-spread fabric is seen displayed, magnified greatly from its original size and put into the public eye.

Zahrah Ehsan’s imagery is delightful, with its child-like objects and ‘pop’ colours such as pinks and purples dominating her canvases. In oils, she paints what can be called ‘a little girl’s daydream’. Little dolls are seen against colourful wallpapers, composed with dollhouses and teacups and pots and pans. A girl, alone in black and white, is also seen sitting on a dining table with an array of domestic cutlery in front of her, perhaps having a tea party (with herself)? However, in Ehsan’s pieces, one can never see the face of the subject; the dolls’ faces are either overturned or overlapped with other objects, while the girl’s face is hidden by a fairy-like skyscape.

What is Ehsan saying with her pieces? At first, to me, the doll overturned on the dollhouse seemed to evoke meanings of loss of innocence, domestic violence and perhaps child-abuse. However, these could be harsher interpretations of the artist’s work, as she could simply be speaking of a lost childhood: a time of carefree behaviour that one longs for, yet cannot go back to. But according to Ehsan, her work represents a general ‘ideal’ life that borders on the unreal, which the protagonist in her work longs for, sees it as her only ‘anchor’ and, in this fixation, tries to ‘steer her life in a certain direction’. Thus, her works seem to portray a desperate attempt to cling on to something hypothetically appealing, yet insubstantial.

Together, the four artists put together a compelling exhibition that was worth a visit.

‘Till Human Voices Wake Us’ was on at Canvas Gallery, Karachi, from 28 September to 8 October 2015. Images courtesy of Canvas Gallery.

Shanzay Subzwari is an artist and art writer based in Karachi. She tweets @shanzaysubzwari