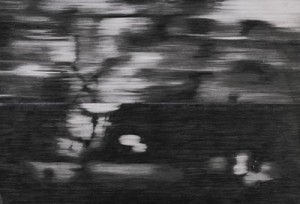 History. Memory. The way we perceive ourselves through these two themes through the personal, the political, or through the earth and nature itself. Soul Searchers presents the work of three artists from Sindh who address these concerns in divergent ways.

Both Imran Channa and Ahmed Ali Manganhar have repeatedly used our received history, post-colonial or the recent past, as a reference point in their work. Erasure, the theme of Channa’s works for this show, has been explored by him before, using media such as digital print and altered books. The present works hark back to the Erasing series of 2007, a set of images using acids on printed photographs. Faces, shadows, indefinite forms look out from these works, which are also woven together or divided into two parts. The large-format series of drawings for this exhibition are executed in graphite on paper and are far more abstract, as if concrete images have completely run into one another to become visual blurs, blotches with only the slightest memory of form. As in the former series, the paper in several works is divided horizontally or vertically into two parts, one lighter than the other. Current scientific research supports the idea that the way we see a particular thing is coloured by our previous memory of seeing the same or similar objects. Channa’s idea, in his own words, is to give the impression of blurring the distinction between objects and time, ‘a conscious act of slowing down history as it evolves, elongating the continuum of Becoming.’

Growing up in Tando Allahyar, once the capital of the Talpurs, rulers of Sindh, Manganhar’s references to history have included hazy, faded images of the erstwhile rulers of Sindh painted on metal takhtis, and colourful acrylic paintings of colonial rulers such as Lord Napier. Another theme has been the popular iconography of film stars, which he refashions in this series, with multi-layered canvases in which images of actors and actresses appear almost as shadows set in domestic interiors, or as hazy images on television screens.

There is the suggestion that in playing accepted gender roles these icons perpetuate them, catching their viewers in a similar bind and retarding the possibility of change. In the smaller, closely related works in the display, there are hints of domestic discord through the use of garish colours scribbled over one another and the vague outlines of figures which appear to hint at confrontation. Two views of a stag being baited by dogs, painted in a similar style to the latter, appear to belong to a different series.

Solangi’s work is soul searching in a completely different way. He is a skillful painter of light in nature, springing from his agrarian roots and his continued affinity with the land. There is also a poetic element in him which recognizes the paradoxes inherent in humanity and seeks to incorporate them into his vision of nature. We see the play of textures and surfaces, the serene quality of spheres and ovals composed of periwinkles floating above the bone-dry wooden pulleys and stones of a well, which are rendered so perfectly as to appear almost photographic; the movements of clouds and rain and our dependence on them for sustenance.

He looks for metaphors in the periwinkle flower, which has become his signature, and is used here to compose planet-like spheres, juxtaposing light against dark. There is a sensitivity in his work which needs time to bring to fruition a tight unity between the physical and the philosophical, object and metaphor.

An artist’s career encompasses periods in which he explores form, composition and content, in various ways. To create truly sublime works of art all these aspects must exist in correlation to one another. In the case of Soul Searchers there is no doubt about the artists’ skills and their potential to make good works of art. The works here demonstrate the concerns of young artists: the examination of post colonial angst, our perceptions of ourselves in relation to the former as well as to our current societal mores and ills, and our use and abuse of nature. But the maturity of vision which comes from deep reflection, in which the viewer discerns multi-layered  strands of thought, balanced so that there is neither a paucity nor a surfeit of images, combined with the technical skills of technique and composition, are not always equal; in some cases they are parts of a whole which the artist himself seems unable as yet to determine.