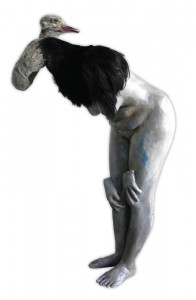 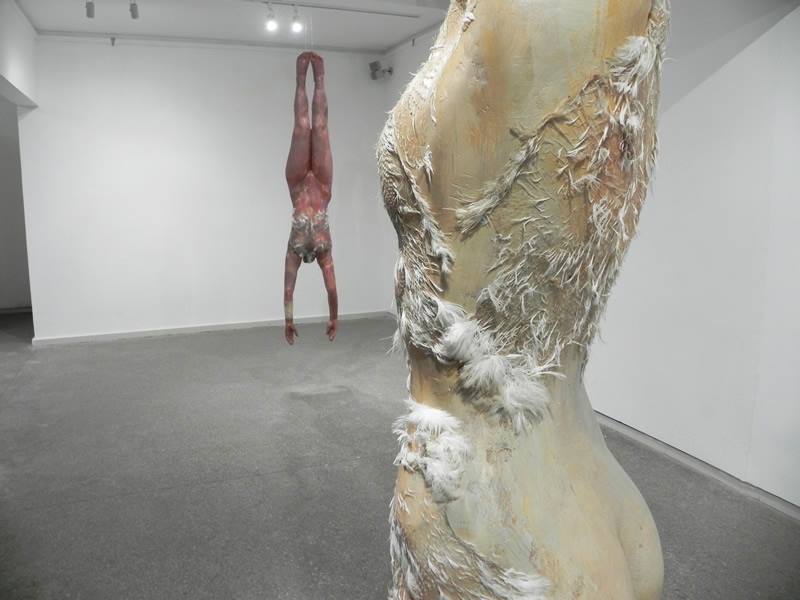 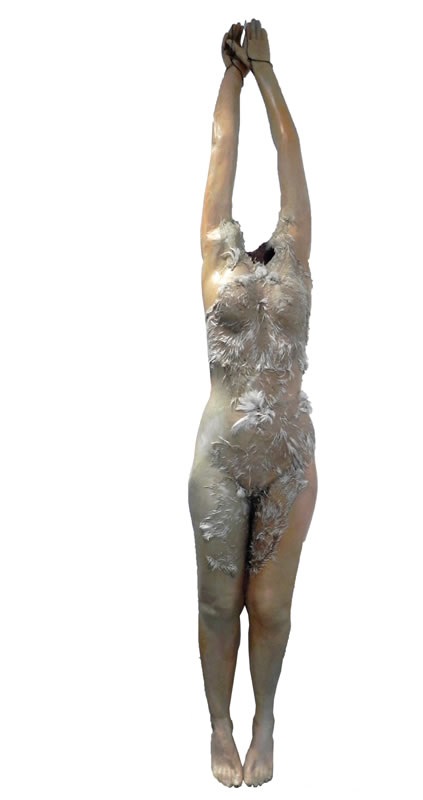 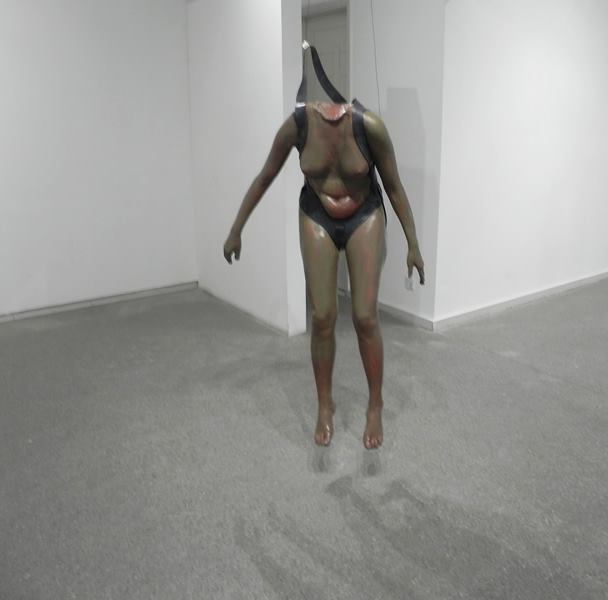 Thoughts Through the Body

Stepping into Nausheen Saeed’s solo exhibition at Canvas, I thought that I have travelled to the domain of the future, because her work takes you to into the realms of the known and the unknown – in more than one sense. Saeed displayed a kind of figurative sculpture at her solo exhibition held from 16th to 25th February 2016 at the Canvas Gallery Karachi. Like me, many visitors were perplexed in trying to orient the origin of her aesthetic choices and formal decisions.

To start with, Nausheen’s preference to concentrate on female nudity is a point to be pondered, since it invoked deep set ideas and notions about the gender divide and moral issues. In her brave new world, you see torsos of naked women hanging from the ceiling, either straight or upside down. A naked girl suspended in between the space of the room. A blend of ostrich and a woman positioned on the floor of the gallery.

All these sculptures marked the fact that the artist was not shy or reluctant to use the human body – especially the female nude, as her metaphor to suggest a number of concerns. Unabashed representation of naked torsos, with details of their physiques exposed served to reiterate the fact that bodies are created by god, and all of us are born in a natural (naked) state, and it is only the culture, society and conditioning that make us to cover ourselves in different orders, attires and layers. So many are hidden behind behind encompassing burqas, some wear dupatas and hijab, others like skirts, and several even enjoy their excursions on the beach in bikinis; yet all of them adapt a dress that is demanded and appropriate in their social set ups and set of beliefs. Each choice, though, signifies a distance from the original state.

In Nausheen’s work, the original and primordial condition of human beings is blended with the situation of animals and birds in our midst. As meat lovers know, we like to have poultry and mutton dishes, made in different recipes and combinations. For us devouring a meat portion on a dinner table and enjoying a non-veg meal is a typical occurrence, without being aware of the routine violence that takes place on our doorstep, whenever we buy fish, mutton, fish or chicken from a superstore or a meat shop. Nausheen Saeed has joined the element of normal culinary practices with the aspect of cruelty in her work, in which torso of a female was treated as if freshly skinned body of a hen. The act of combination an ordinary food item with a woman’s body was a great step towards addressing the situation of women in a male-dominated society, where all important points in a woman’s life, career and destiny are decided by men.

Nausheen Saeed seemed to liberate that condition or fate, but as it is ironical that once you escape the shackle of gender’s position and power, you see how the artist has inculcated the element of violence that does not discriminate based on race, religion, tongue or sex in order to denote the political scenario of a place and the world. Her sculptures are reaffirmations of how the human beings are seen not as the embodiments of everyday personages but as emblems of metaphoric entities. Her figures are a sign of worldly being but at the same instance denoted the way woman can liberate from the family, familiar and social scenarios. In her work one can see the personalities of females portrayed beyond their worldly restrains and limitations.

In her two pieces of sculptures, titled Meatless Days I and II, one could see how the artist translated the human body into the flesh of a chicken being slaughtered. The combination of human body and the bloody surface of a skinned creature was conveyed through the figures, with the skin and feathers of birds at certain points.

The act of adding other elements into the human form is a way of understanding the extent a human being can imagine and bear in his/her real life. In a work called Approach, Nausheen Saeed has created a synthesis of a female figure and an ostrich, but by joining the two she has created a new form that reflects the desires and destinies of human beings.

However all these humans are in their primordial state, hence the artist has addressed a basic aspect of being, which is vulnerable in the age of terror and terrorism. Her work on the one hand is a celebration of female form, yet at the same instance it is an essay on human suffering, whether caused by the external sources or inner uncertainties. If, indeed, there is a difference between the two.

One Response to Thoughts Through the Body