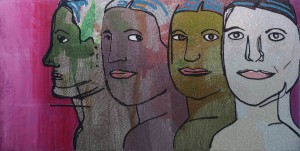 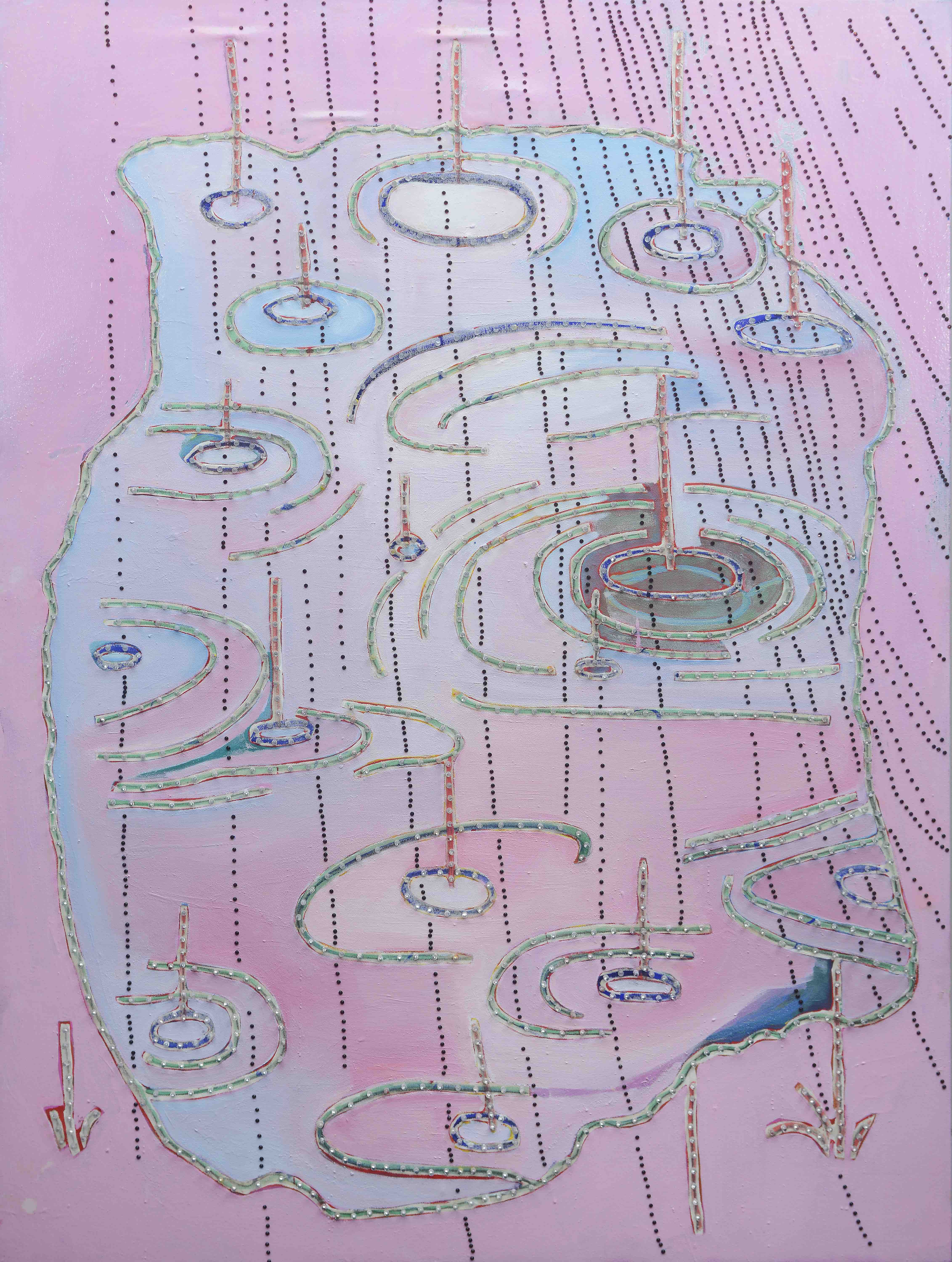 The Whiff of The Everyday

It is perhaps pertinent to notice how proclamations and announcements, and significantly that of solo show openings resonate irrevocably. Belonging to an art community, it is perhaps intermittent that one misses out such an art invite. The announcement of Saba Khan’s Solo show titled “How not to be Small and Silent” at Lahore’s most eminent art gallery Rohtas 2 Gallery last Thursday could not be missed. The high contrast,motley invitation surely acted as a salutation to the exhibit. It struck the show to gain an antecedent reputation. The invite encapsulating the aesthetics of Khan’s oeuvre was more a statement rather than a news-giver. While the visual vocabulary of the invite was a valiant reference to the popular pattern and motifs, once becoming an announcement design for an art exhibit, gained an obscure shift in the context and meaning. Suddenly the quirky and often ignored popular symbols and shapes seemed to be making a statement.

One is surely not disappointed when entering the gallery doors, being welcomed by a Gesamtkunstwerk display. The transcendental and totalistic display of work fearlessly adorns the space, with large scale paintings bejeweled with rhinestones and blinking lights, screaming loudly which at first sounds like clamor, but as ones eyes and minds settle, slowly capture the eye preparing one for a perceptual ride. Although the notion of Gesamtkunstwerk now seems archaic, it has hardly disappeared; from Art Nouveau where design functioned as a dominant term, to Bauhaus where it presented itself in the building and structure, Gesamtkunstwerk ceaselessly remains pertinent to the artist’s desire even today to craft a holistic experience. The disparate display of Khan’s work encapsulates the viewers’ perception. With an aim to create a totalistic experience Khan transforms the gallery by commissioning a dauber to paint the walls into a homogenous tile print. The walls not only play a perceptual goggly, they re-contextualize the paintings hung on the wall, positing them comfortably into a domestic and familiar environment.

At first glance through the gallery, Khan’s work references imagery from the daily life, the everyday and the banal monotony. The Vernacular is a running theme in Khan’s career, where art historical, political and pop cultural references dictate most of the compositions and imagery in the paintings. The works thematically juxtaposes the grave themes of state’s subjugation, female objectification, using everyday visual imagery as a means to critiquing the cultural, social and political restraints enveloping the popular philosophy. Khan playfully makes a comment on the state role in popular aesthetics by placing artificial planters in the gallery analogous to the disparately placed similar planters in the corners and intersections of the city of Lahore. The install is a pertinent comment on the infiltration of the state’s kitschy aesthetics shaping the popular culture of today, more so a comment on the visual pollution aggravating and shaping the ocular narrative of the city.

Khan’s signature material of adorning the canvas with colorful rhinestones, beads and glitter with oil and acrylic washes surely aids towards a visual continuity throughout her practice. What’s intriguing is the contrast between the carefully controlled hand that falls on the canvas while arranging the beads, and the intuitive and spontaneous thin layers of paint illustrating imagery that is personal while also political. It is perhaps confusing to spot whether Khan is critiquing the vernacular or celebrating the everyday, but while the stance remains vague, the viewer seems to reflect on the deep inquiry of the dexterity and the craft.

Khan’s use of bold colors, and play with scale of the painting, draw parallels to late 20th century second wave of Black Art Movement. Mickalene Thomas known for her iconic depiction of the powerful women collages visual imagery from everyday life adorning the surface of the painting with rhinestones. While the thematic concerns of both the artist relay drastically, the formal treatment and process of the work draws unequivocal parallels.

Most intriguing in Khan’s work is her fetish for lack of perfection, more so the celebration of error, which draws whiff of human presence and inaccuracy in the work. Referring to the miniature paintings’ experiment with the perspective, Khan brings together vantages of myriads perspectives, rearranging the visual efficacy and allowing the viewer to fall complacent in its engagement with the work.

Bertolt Brecht sights “The aim of science is not to open the door to infinite wisdom, but to set a limit to infinite error.”

Khan’s process of work intermittently allows room for error, welcoming it with both arms, allowing it to take over the work. The wildness presenting her work and the construct evolution is privy to the fact that Khan’s work has evolved drastically since her last solo show. The way she engages with the medium, surface, and her process is very honest, transparent and fearless. The artist engages with the work as hands on collaborator allowing it evolve and take up a life of its own. With the subjects she is exploring, the critique she is doing, and the physical work she is creating, Khan to me is an initiator, thinker, instigator or facilitator and not just the artist in the work.