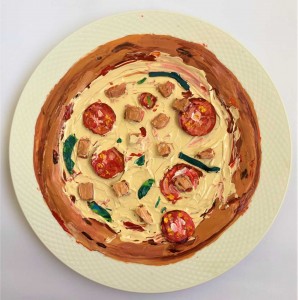 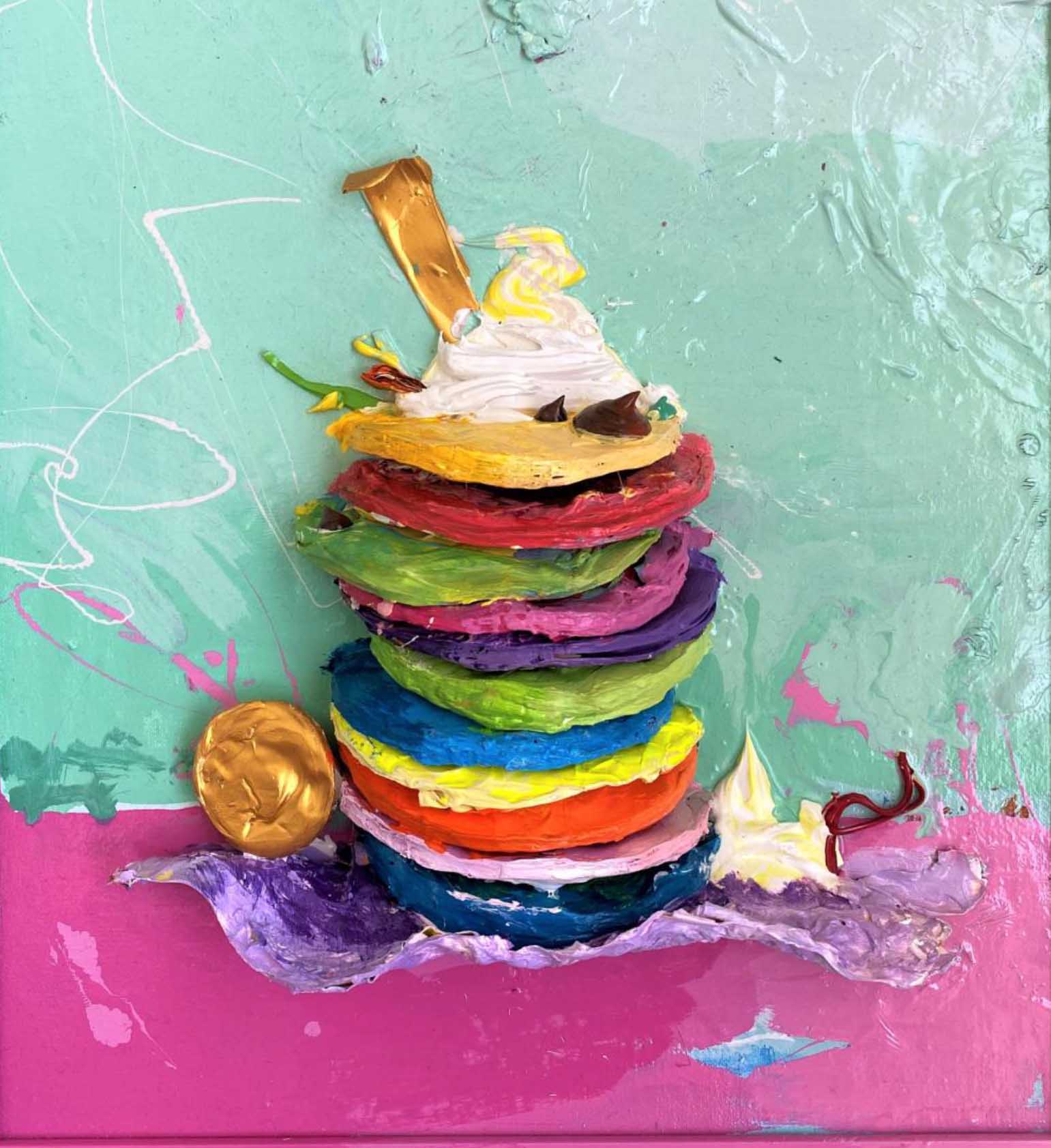 The Weight of Paint

A harmonious orchestration of material and artistry, replete with quaking compaction of gluttonous elements was to be experienced at Maryam Arsalan’s first solo presentation, Smorgasbord, at Lahore’s Taseer Art Gallery last month.

Aptly named and exhibited in the buffet style, all manner of delectable confectionery and savory, breakfast, fruit, vegetable and tea items were displayed in the most inviting manner. These, whose true identity as artworks one constantly had to remind themselves about, held an uncanny and misleading likeness to the form of food that they seemed to emulate. Upon closer inspection of the works and engaging with the one, very revealing, video-based work in the show, the misleading quality was unveiled in a manner so candid, it was poetic; Smorgasbord wasn’t necessarily about the food at all, it was about paint and painting- specifically about Arsalan’s painting. Not form, but Arsalan and her skill were the chosen subjects of this show.

The video work portrayed a group chat where Arsalan the artist creates Arsalan the character, whom the former uses as a foil for the show’s audience, asking the other participants of the group chat (the personified Oil Paint, Enamel and Acrylic Paint) the same question that we the audience were asking of her: “How?”. Marveling at “how” Arsalan had managed to achieve this level of virtuosity in form out of the mediums of enamel, oil and acrylic paints was natural. Arsalan personifying these elements in her work and consciously making them the stars of her show, alongside herself, added flavor, excuse the pun, to the already playful work. By bluntly calling on the audience to focus on her striking skillset, Arsalan made both herself and her work more exciting, simultaneously eliciting important questions regarding the role of an artist in cultivating the perception of their work and of their own perceived clout.

The show included two-dimensional paintings of varying foods, including Bananas and a particularly enticing Ice Cream Cup. A high relief painting of Rainbow Pancakes stacked vertically, deliciously illustrated that part of Arsalan’s draw comes from her close compositions, depicted from oblique angles or atypically cropped. She takes painterly liberties and innovation in a ferociously performative direction, pushing the medium to the very limits of its creative pliability. This is most notable in her three-dimensional works, particularly Chai and Desert Platter, where ceramic tea cups or a two tiered dessert platter become the canvas on which acrylic, enamel and oil paint are applied in exacting means to emulate the titular subject matter, all the way down to the thin film of matt malai that collects on the top of a cup of tea, or the translucent, highly reflective, red jam in the centre of a biscuit. These works are bluntly material. There is a matter-of-factness about her application and affirmation of what is. For her three-dimensional pieces in particular, all of which the audience can walk around and observe from multiple angles, Arsalan has found a steadying collaborator in gravity, giving weight and theatricality to each of the pieces.

The appearance of each piece however, hardly balances what one is presented to interpret – Arsalan turns convention on its head. Here, the medium is not the facilitator, but the subject. The form of the work, the food portrayed, is simply the medium through which she is choosing to talk about her subject matter: painting. By using only food as a concept for her language, Arsalan negates the hierarchy of form, allowing at least within the gallery space, for the viewer to concentrate unimpeded on the breadth of her constructions.

The works are not meant to function as commentaries, they’re very much about the act of painting and what that can do. The materiality and almost absurd factuality of it – both in and beyond the mistique of the works- demonstrate the pursuit of what the breadth of singular vision can bring forth. Arsalan’s personal Smorgasbord  manipulates the optics of painting to an edacious delight.