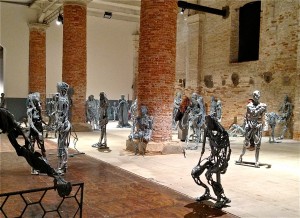 Almost every two years since 1895, Venice is invaded by the global community of art-lovers that flock, every time more copious, to the unmissable appointment of the International Art Exhibition “La Biennale”. Not that Venice needed any extra visitors, being all year long destinations for endless hordes of tourists. Nonetheless, in the last couple of decades, the weeks of the Biennale’s vernissage, have surely become the city’s culmination of smart set and glamour.

The celebrations includes the opening of the main show, traditionally curated by the director of the Biennale, at “Arsenale” and “Giardini”’s Central Pavillion, the International Pavilions at the Giardini and in many new locations, the further collateral events mushroomed around the city and the many sparkling – and often overdone – parties that manage to beat even the international clamour generated by the yearly Venice Film Festival.

More than 440.000 visitors attended the 2011 edition of the Venice Biennale and the current one will probably break the record.

This edition’s director, Massimiliano Gioni, is brilliant, handsome, fashionable and Italian (after a long series of foreigners heading the Biennnale). Associate Director of the New Museum in New York from 2007, Artistic Director of the Fondazione Nicola Trussardi in Milan from 2003, Gioni co-curated the Berlin Biennale in 2006 and curated the Gwangju Biennale, in South Korea, in 2010.

“The Encyclopedic Palace” is the title Massimiliano Gioni chose for the main 2013 show in Venice: an intellectually sophisticated, up-to-date and entertaining exhibition. Conceptually inspired by the imaginary Museum designed in 1955 by the Italian-American self-taught artist Marino Auriti, together with the U.S. Patent Office, the show opens with the model of the “Palace” of the same name. A 136-story building, that would have been, if ever built in Washington D.C., seven hundred meters tall, occupying over sixteen square city blocks with the ambitious and utopic purpose of housing the universal knowledge of humankind.

The rest of the show is a spiritual and aesthetical itinerary toward art works, objects, images from several archives and all kind of statements of any form of obsession or mania, spanning over the past century alongside some “site-specifics”, from over one hundred and fifty well-known artists, outsiders, mentally disturbed people, coming from thirty-eight countries.

“The exhibition is structured like a temporary museum that initiates an inquiry into the many ways in which images have been used to organize knowledge and shape our experience”, writes Gioni, explaining his personal fascination for images and there importance in our historical era. “Blurring the line between professional artists and amateurs, outsiders and insiders, the exhibition takes an anthropological approach to the study of images, focusing in particular on the realms of the imaginary and the functions of the imagination. What room is left for internal images – for dreams, hallucinations and visions – in an era besieged by external ones? And what is the point of creating an image of the World when the World itself has become increasingly like an image?”.

“The Encyclopedic Palace” is a labyrinth of hope, suffering, passion, frustration, fear.

While the National Pavilions – eighty-eight participations this year – are as always multi-coloured and variegated, interesting projects alternate with disappointing solo or group shows, “The Encyclopedic Palace” is a one in a lifetime experience.

Not only for the beauty of the show, but for the perfect timing, and probably occasion, in with it has been presented. In fact, one of the prevalent critics of the past years’ Venice Biennale’s main shows was that they were not matching the expectations. Not only, or not always, for the art or artists chosen by the curator, but more often for not representing a proper “outcome” of the previous two years of international contemporary art history.

Well, Massimiliano Gioni’s show is not only exceptional in its content but also absolutely punctual, in terms of timing, and therefore accessible to general public.

While waiting to have – InshAllah in the near future – its own pavilion at the Venice Biennale, Pakistan is represented at the 2013 edition by the worldwide acclaimed artist, Imran Qureshi in Gioni’s show. A series of colourful miniatures, entitled “Moderate Enlightenment”, outline both traditional and contemporary Pakistan. It has been a thrilling year for Imran Qureshi, first nominated “Artist of the year” by Deutsche Bank, then invited to do an installation on the Roof Garden of the Metropolitan Museum, to the Biennale in Venice and last, on September 24th inaugurated his first Italian solo show at the MACRO Museum of Contemporary Art of Rome.