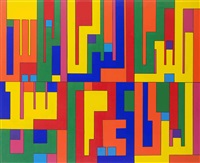 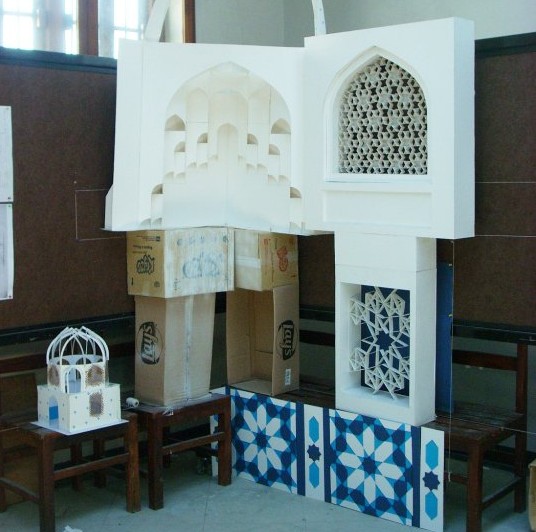 The term “Neo-Geometry” first became a part of the art world in 1986 when four young artists, the so-called “neo-geo”, were fêted in New York as the most important discovery on the international art scene, with 4 young artists Ashley Bickerton, Jeff Koons, Meyer Vaisman and Peter Halley being hailed as the “The Hot Four” and the world was told to gear themselves and “Get Ready for the Next Art Stars” according to the headline of New York Magazine on 1986. Later again the following year, an article written in the New York Times in 1987, Neo-Geometry evolved as “work that makes highly conscious appropriations from earlier art. Mr. Halley, Sherrie Levine, Mr. Bleckner and Philip Taaffe, for example, recycle geometric motifs of the 1960’s and 70’s in their canvases, but put them to new use, regarding their geometry as referential rather than abstract. ‘Everything Gets Fractured’

”As you begin to see something clearly, it breaks up,” Mr. Bleckner said. ”I like to use them as taking the idea of an image to a place where everything gets fractured. The paintings have to do with different states of consciousness, trying to describe that place in our minds where we see and don’t see simultaneously.”

But what exactly is ‘Neo-Geo’? According to some critics, “…the term is best reflective of Halley’s work, which introduced a new type of geometric painting that rejected the non-objective abstraction of the 20th century, instead using figurative source material such as microchips and battery cells. At the same time, the loose label has been criticized as a marketing ploy used in the fervent 1980s art market, which was particularly fixated on “the new” and “the next big” artistic developments.” According to popular opinion, Halley’s works showed geometric forms in bright colors, which differed from “geometric abstraction” in that they really did abstract something (and thus point to something more than simply themselves as geometric forms) and presented things from the real world: images of mass production or institutionalized power, highways, prisons or circuit boards.

Before this, there was Abstract Expressionism, followed by Pop, Op, Color Field, Minimalism, Conceptual art and Neo-Expressionism. Each of the succession of trends that had characterized American art since the end of World War II has had its brand name. And yet the newest one at the time – well established and shown at the hottest galleries -still had no real handle. Borrowing from Pop, Minimal and Conceptual art, and heavily involved with social theories, it was variously referred to as Smart Art, Post-Abstract Abstraction, neo-Conceptualism, Simulationism or simply Neo-Geo, short for ”new geometry.” But would it be right to attribute the discovery of this style solely to this group of people?

In an earlier book review I wrote on Bedri Baykam’s highly underrated critique on the machinations of the politics surrounding the world of art, “Monkey’s Right to Paint”, Baykam speaks of the Pakistani born – British based Rasheed Araeen and the “institutional racism” that is faced by non-white artists coming from a non-western background. When I reflect now on how Bickerton, Koons, Vaisman and most especially Halley have been lauded as the fantastic four who created a “storm” in the art world in the 80’s with the neo-geometrical style, one wonders where the critics were when Araeen was exhibiting his works in the 50s, 60s and 70s

In December 2017, an exhibition titled “Rasheed Araeen: A Retrospective” opened in the Van Abbemuseum in the Netherlands. The exhibition, spanning 60 years of work, presented a body of work that has had a profound influence on generations of artists, writers and thinkers. The exhibition was structured across five chapters: from his early experiments in painting in Karachi in the 1950s and early 60s, his pioneering minimalist sculptures carried out after his arrival in London in 1964, key pieces from the 70s and 80s following Araeen’s political awakening, his nine panel cruciform works from the 80s and 90s and a selection of his new geometric paintings and wall structures. With no formal training as an artist these early works reveal Araeen’s pivotal experiments with abstraction and his keen interest in the understanding and manipulation of geometry.

In “Boats Towards Abstraction” (1958-62) and the Hyderabad series (1962-63), his interest in geometry and natural forces such as water and fire, as well as his initial forays into sculpture with the twisted bicycle wheels of “My First Sculpture” (1959) are seen. A section of the exhibition titled Geometry and Symmetry (1964-70) examines Araeen’s unprecedented contribution to minimalism. Arriving in Britain in 1964 Araeen embarked on a series of pioneering works, including his Structures and lattice pieces, which drew on his training as an engineer and his interest in geometry and symmetry, which has remained a consistent feature throughout his practice. On display were amongst others “Sculpture No. 1” and “Sculpture No. 3” (both 1965-2017), the lattice works “3 Y + 3B” (1968-69) and “Bo0” (1969) and the structure “Nine” (1967), Araeen’s first interactive piece where viewers could re-position the painted wooden cubes in ever-changing configurations.

Seeing such key pieces on display, one is prone to wonder, how is it that when an artist who clearly has such a large body of work collected over a span of decades is overlooked as possibly being then one of the pioneers of the style of “Neo-Geo” as we know it today?

Throughout history the link between geometry and architecture has been strong and while architects have used mathematics to construct their buildings, geometry has always been the essential tool allowing them to choose spatial shapes which are aesthetically appropriate. Euclidean geometry, for example, was the basis for architectural styles from Antiquity through to the Romanesque period. Perspective and Projective geometry, for their part, were important from the Gothic period through the Renaissance and into the Baroque and Neo-classical eras, while non-Euclidean geometries characterise modern architecture. As history and the idea of an ideal architectural aesthetic evolved, what came to be seen and understood over time is that sometimes it is geometry which drives architectural choices, but at other times it is architectural innovation which facilitates the emergence of new ideas in geometry, such as in the works of Frank Gehry and Zaha Hadid.

Yet here it would be pertinent to point out that the idea of geometry as being a primary source of influence in the practices of art and architecture are not aspects that have filtered over from the Western world into South Asia. In fact, South Asian art and Architecture has for centuries depended heavily on the influence of geometry to define form, space and order, be it on a canvas or in the built environment. Here, it would be pertinent to point out that examining the geometric patterns that characterise so much of Islamic art can provide one with important insights into the technology, scientific knowledge, and religious beliefs of Muslims.

Mughal art, which is more infamously known for its miniature paintings, relied on Pattern—floral and geometric— which is another distinctive feature of court art, whether spread across a wall, on a book cover or border of an album leaf, around a dagger hilt, or on a carpet. With straight edge and compass, artists created geometric patterns of intersecting circles upon which they drew grids of equilateral triangles and squares. These in turn could be elaborated into polygons and stars. Vines, leaves, and blossoms grew out of each other in continuous curving patterns. In the Mughal period, these floral designs became more and more realistic, so that many flowers could be identified. Colors in patterns were combined to create the rich floral and geometric designs found in Mughal textiles and carpets. The same formal elements—rich geometric and vegetal patterns, rich colours, and rich materials— were applied to architecture, textiles, ceramics, metalwork, and stone, stucco, and wood carvings. No distinction existed between what is called fine art in Western cultures and the decorative arts.

From the Department of Islamic Art at the Metropolitan Museum of Art, “Consisting of, or generated from, such simple forms as the circle and the square, geometric patterns were combined, duplicated, interlaced, and arranged in intricate combinations, thus becoming one of the most distinguishing features of Islamic art. However, these complex patterns seem to embody a refusal to adhere strictly to the rules of geometry. As a matter of fact, geometric ornamentation in Islamic art suggests a remarkable amount of freedom; in its repetition and complexity, it offers the possibility of infinite growth and can accommodate the incorporation of other types of ornamentation as well. In terms of their abstractness, repetitive motifs, and symmetry, geometric patterns have much in common with the so-called arabesque style seen in many vegetal designs. Calligraphic ornamentation also appears in conjunction with geometric patterns.

The four basic shapes, or “repeat units,” from which the more complicated patterns are constructed are: circles and interlaced circles; squares or four-sided polygons; the ubiquitous star pattern, ultimately derived from squares and triangles inscribed in a circle; and multisided polygons. It is clear, however, that the complex patterns found on many objects include a number of different shapes and arrangements, allowing them to fit into more than one category.”

In contemporary South Asia, and specifically Islamic art and architecture, or rather art and architecture attributed to Muslim artists and architects, the language of geometry takes on new meaning. Not so divorced from the history from which it evolved, but it would appear to be more of a balance between what once was and what now is. But some critics feel otherwise

In his lecture, “The Originality of ‘Islamic’ Art”, architect, contemporary critic and educator, Kamil Khan Mumtaz has defined the problem of the contemporary practitioner as one for whom, “Given the modern definition of “Art”, the contemporary “craftsman” seeks acceptance and recognition by “modernising Islamic art”, distorting the traditional forms and incorporating new forms to demonstrate his originality, novelty, creative expression, whereas the modern “artist” seeks legitimacy by “Islamicising modern art”, by incorporating some traditional motifs, such as geometric patterns and calligraphy.” Here, Mumtaz speaks of the bastardisation of traditional practice to fit in the modern and acceptable precepts of the contemporary world, where the practitioner (be he an artist or an architect), seems to have apparently lost all sense of legitimacy in the creative process as well the inherent meaning and significance of his creation.

For Mumtaz, (referencing from Keith Critchlow’s 1976 book “Islamic Patterns), the true essence of patterns and geometry in art and architecture come from an in-depth understanding of how form, proportion and decorative scheme becomes a ground for contemplation of higher realities. Where each design is contained by a frame that establishes a finite universe, reflecting a cosmos created in perfect balance, in perfect harmony, made up of a diversity of elements governed by symmetry and proportion, with a unique center, the origin, to which everything must return. Here, on closer examination, each element turns out to be a microcosmic representation of the larger scheme, with its own frame containing a symmetrical arrangement of elements and a unique centre. This is not merely a mechanical tool for setting out buildings and decorating surfaces, but is profoundly connected with the metaphysics of the ‘sacred’ sciences of number and geometry.

Can we then say that Araeen’s manipulations of geometry over the last 6 decades and Mumtaz’s perspective on the true ideations of geometrical order in the contemporary world are somehow intrinsically linked? Perhaps they are and perhaps not. But it would be interesting to see these two powerhouses, one deeply enmeshed in the spirituality of the idea of sacred geometry and the other constantly breaking the mold pertaining to geometric order, come together on a platform to discuss the possibilities and nuances as they have come to be in the world as we know it.