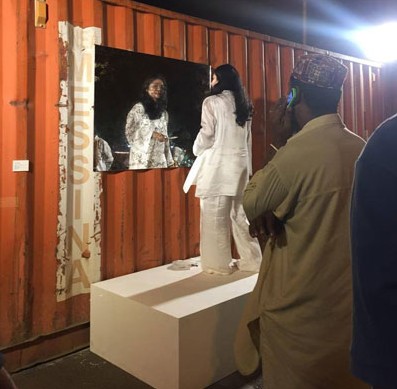 Entering into the boundary of the Karachi Port Trust (KPT) Head office building, the venue for the 3-day International Performing Arts Festival (IPAF)

Neon
Alina Tang: Inspiration by Virtue of the Flower
The Imaginarium

Entering into the boundary of the Karachi Port Trust (KPT) Head office building, the venue for the 3-day International Performing Arts Festival (IPAF), brought on a blend of curiosity and excitement. A feeling that emerges from the unfamiliarity and newness of this experience for a Karachi-based audience. Outside of the usual gallery space and smack in the middle of the city’s industrial hub, the experience created was unlike any other show opening. While there have been other efforts of bringing art out of the private and into the public space, the opening of the IPAF, held on 14th March 2019, stood in its own light. The show titled ‘The Quantum City: Territory, Space, Place’ was curated by Amin Gulgee, Zarmeene Shah and Sara Pagganwala with Marvi Mazhar and Associates as the architectural consultants. The show was supported by I AM Karachi, Martin Dow group and KPT.

It was an evening of bustling energy that was built through a variety of engaging performances. The experience of stepping into these large shipping containers to view art, paired with the historically enriched architecture of Karachi’s age-old KPT building in the background, curated together created an unique experience that was open to all.

The first performance that greeted the viewer was by Syed Ammad Tahir, who stood on top of a shipping container, much in the same way as a Pakistani politician, and delivered a speech that consisted of various excerpts from other famous speeches. This performance undoubtedly was one of the most engaging performances as it not only engaged the audience on the venue but also received a wide viewership from people standing at the edge of the sidewalk across the building.

Similarly, Amin Gulgee’s and Muzzamil Ruheel’s works are also examples of performative works that engaged with the audience. Whether in the form of a ‘Quantum Rickshaw’ encircling the venue or in the form these “umbrella-holding-clad-in-black” followers, such performances had an almost intrusive quality. The bedecked rickshaw that demanded attention would cut through the audience looking at another work or just a bunch of bystanders having a conversation. By doing so it interrupted one’s thoughts and interactions. Similarly the “umbrella followers” created discomfort for the audience that didn’t quite understand why an escort holding an umbrella over their head was shadowing them. These feelings of unease and intrusiveness are perhaps a nod towards issues class in our society.

Other performances, that were interactive in a different way, included Noor Ahmed’s. Her cold stare through the mirror and directness in tone in asking “do you have anything to say?” or “you have nothing to say?” put the viewer on the spot. It made one think about what is the right thing to be said? Or what is the desired response to be given? Many other performances by artists such as Munawar Ali Syed, Maha Minhaj and Zoya Alina Currimbhoy amongst others, populated the landscape of this show both inside, outside and atop the containers. Each performance equally captivating and conceptually enriched.

Navigating through a maze of performances and shipping containers at the IPAF, the viewer would enter each space, not knowing what is being shown inside the container. Besides performances, there was a wide range of works on display featuring a number of artists from all over Pakistan. The works ranged from video projections, sculpture, paintings, and photography amongst other things. This article could not possibly encompass the detailed discussion each unique art work on display deserves.

The experience of stepping inside a reasonably small shipping container not only made the viewer’s aware of each other’s presence in a compact space but also provided an up-close, almost immersive, viewing experience. An example of such an experience was Zeerak Ahmed’s brilliantly executed work. Her use of sound and video together created a multi-sensory experience. Speaking of multisensory exhibits, Danyal Sadiq & Hamza Awan’s brilliantly executed work utilized sound, light, refraction and haze all together to create a unique exhibit. There were cues forming outside the dark and mysterious shipping container as only a few people could enter at a time. The experience once you enter the space was unparalleled as it was as if you are literally inside an artwork. The optical illusions almost transported the viewer into another space.

The words “In Loving Memory Madiha Aijaz 1981 -2019” in neon lights stood out against the backdrop of yet another shipping container. This was Muhammad Zeeshan’s work paying tribute to the memory of the late artist and photographer. IPAF also featured works by Aijaz herself.

To conclude, public art festivals such as this are much needed in Karachi. Perhaps what was so unique about the experience was viewing the containers as a “space” rather than an “object”. The sub-conscious process of stripping down the meanings we usually attach to containers, added to the experience. Opposed to the idea of containers as barricades etc. being used to block out parts of the city and restrict access, this exhibition utilized containers in a way to invite the public in.