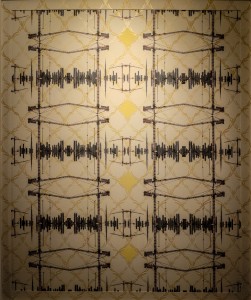 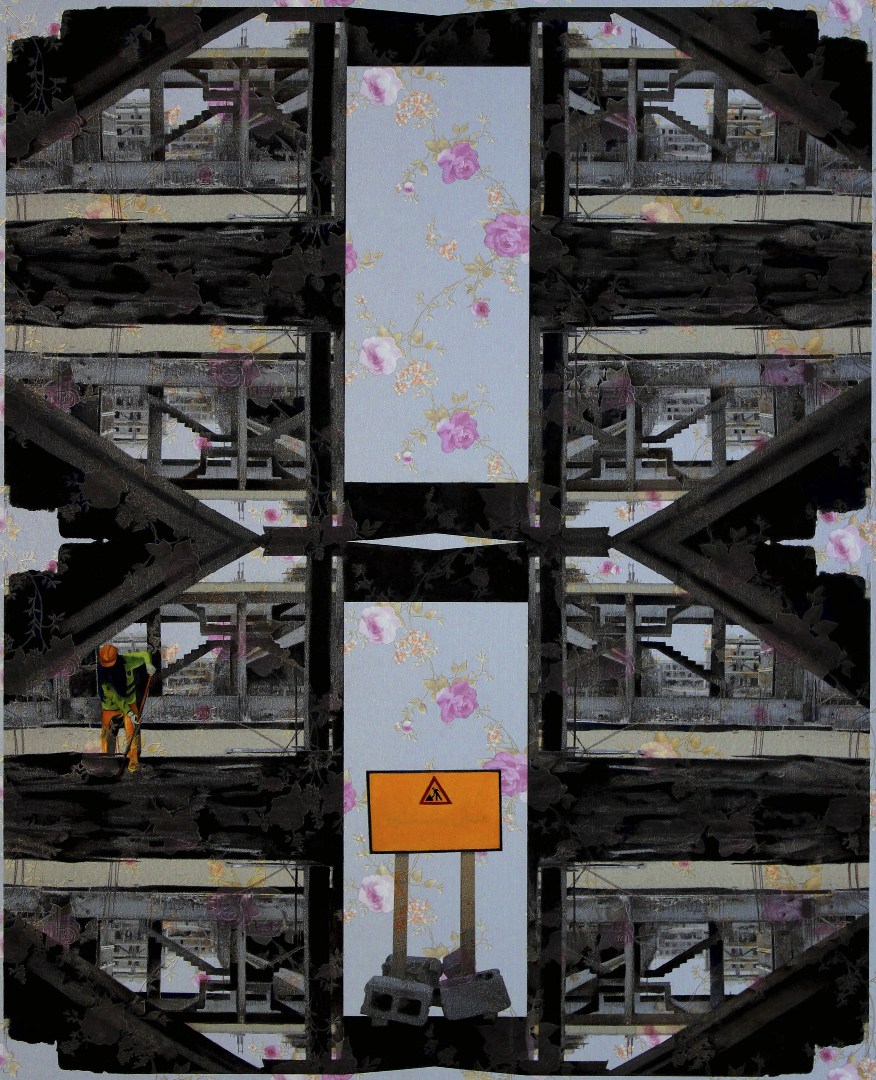 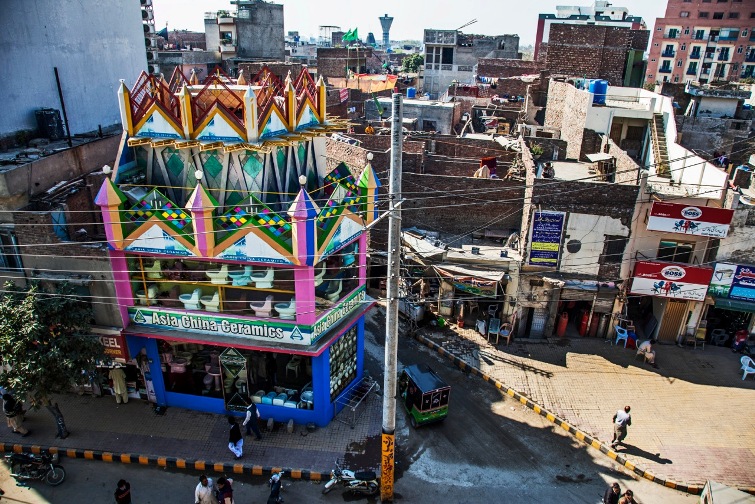 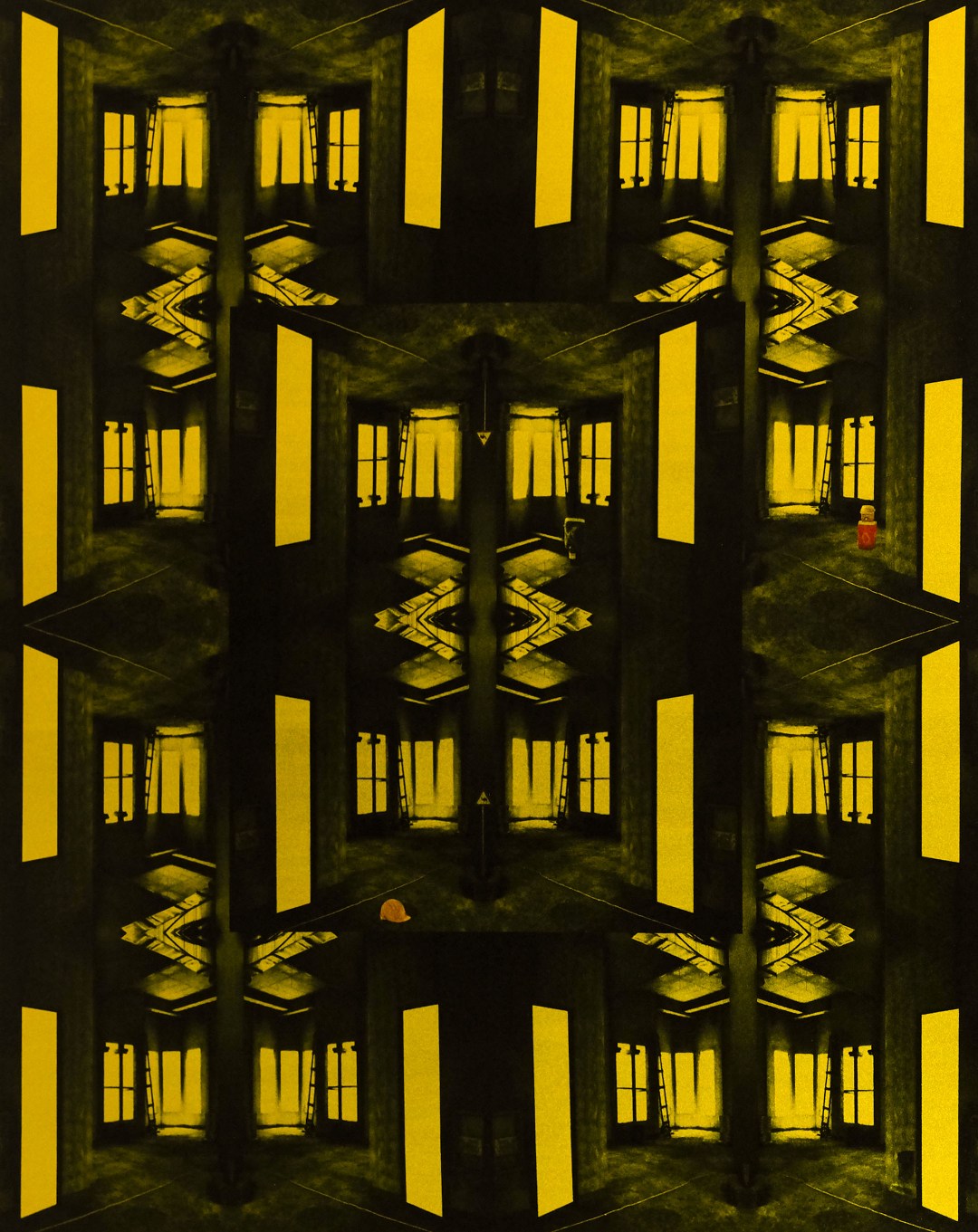 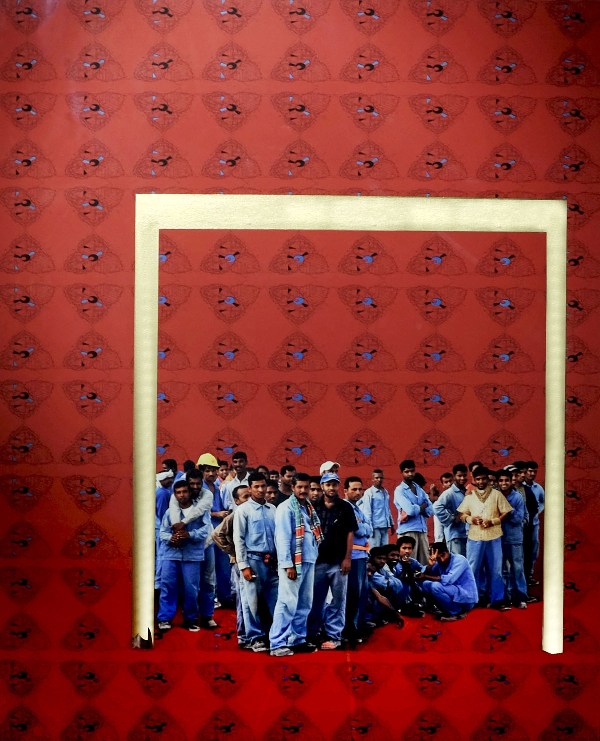 If, upon arriving at the Lahore airport, you find yourself playing an unwitting part in some sort of Exodus, it would be a good idea to check if your visit has coincided with any flights to or from the UAE that day. When these e’er-do-well, steel-grated, jewel-plated Arab states call a native of this land over to their side, his entire family – immediate and infinitely extended – comes to see him off to what Zahra Jewanjee rightly refers to as ‘The Promised Land’. In her first solo exhibition, curated by Usman Saeed at Saeed Akhtar Studio in Lahore, Jewanjee explores Dubai’s El Dorado-like status, the industrial vigilance it has come to be associated with, and what this implies for the countless hopefuls who set out seeking its riches every year (trailing behind them clans of teary women and elders to whom Dubai and its rumoured beneficence are almost mythical).

Jewanjee translates Dubai’s flux into a series of digital prints and painted wallpapers. Struck by the expansive, ceaseless construction carried out in a land that is essentially a stretch of sand, she crafts an imagery that encompasses both the majesty of these high-rises and the uneasiness they can convey in their grimly metallic, half-finished states. Breathing in labour, breathing out steel skeletons and cement storeys, they rise from the desert in giant harmony, prompting one to wonder about the future of the emirate and whether or not there would be room in all that geometric infinity for a common man’s dreams. It is not difficult to see the afterglow of the American Dream in a situation like this. Dubai promises to many the same bounty, the same chances at social ascent, and migrants flock to it as they did to the New World once.

Some of Jewanjee’s prints, like Gold Doors (a kaleidoscopic image of a space under construction punctuated by golden doorways), seem at first to be more or less direct references to the effortless urbanization of Dubai and the ensuing gold rush. Infinite City is another such image, a flowerbed arrangement of painted cranes on soft gold filigreed wallpaper. Building blocks pile up like clockwork and the city grows with an almost hypnotic rhythm. A sense of wonder and euphoric wakefulness is conveyed. But that is not all. Jewanjee leaves careful little signs of human presences in these spaces, ghosts of human aspirations that linger in the metallic purgatories and keep the compositions from becoming mere exercises in design.

A minuscule water cooler and safety helmet inconspicuously occupy niches of Gold Doors. A painted figure of a construction worker inhabits the concrete symmetry of Men at Work. And the fact that both Infinite City and Men at Work are printed and painted on floral wallpapers also makes it impossible not to step into the trap of a poetic reading of the images, one that deals with a more fundamental dichotomy than a casual musing about how the unfinished structures will look when finished. Is urbanization even compatible with personal ambition? Will these workers ever amount to anything other than the number of hours they work per day, per week? Will they become as uniform as the floors they stack to form skyscrapers that have more distinction than they?

Though the embossed roses and vines of the wallpapers seem to coexist with the printed masonry, the choice of these wallpapers as surfaces remains a curious one. I could not help but be reminded of Willy Loman’s little outburst from Miller’s Death of a Salesman – “Why don’t you open a window in here, for God’s sake?…The way they boxed us in here. Bricks and windows, windows and bricks…They should’ve had a law against apartment houses. Remember those two beautiful elm trees out there?…They should’ve arrested the builder for cutting those down. They massacred the neighbourhood.” In Two Men Staircase, the wallpaper tendrils that happen to fall beneath one of the workers’ makeshift bed are accentuated with gold by the artist so that they seem to issue from his slumbering form with the sinuousness of far-fetched dreams. In Windows, the “sanities” (to quote, now, from Margaret Atwood) of “the houses in pedantic rows“ are both mocked and emphasized by the centralized, suspended figure of a man cycling to work, the wheels of his bicycle being the only anomaly in all that urban order.

20 Million Man Hours cuts to the chase and shows a large group of blue-collar workers gathered beneath a golden arch. Many are smiling, some more widely than the rest. They appear hopeful, even assured. But Jewanjee successfully dodges pathos by adding, to one of the boys on the right, the outrageous golden shirt commissioned in India last year by a man who simply wished to be as irresistible as gold. In her print, the addition of the shirt takes on new meaning, being sported by a young construction worker who seems to have been touched by a rather disoriented King Midas. But that is Dubai for you. It has a siren song and many have heard it. In Opulence, one of the finest pieces from the show, it is represented by a magic lamp, a magnified pair of parted lips, and a busily ascending, thickening skyline in the back.♦

Dua Abbas Rizvi is a visual artist and writer based in Lahore, Pakistan

One Response to The Promised Land