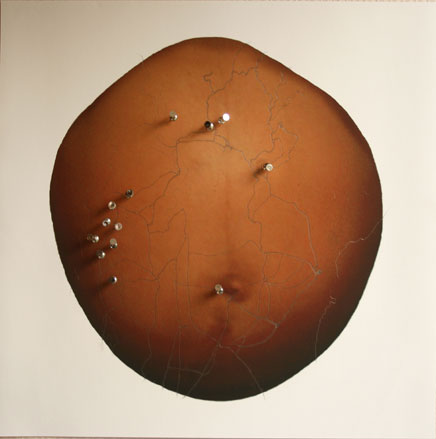 The Nation and the Modern Myth

When one reflects on the concept of the modern mythology in itself, one must turn to the seminal text of Roland Barthes dealing with this issue. Barthes aptly describes ‘myth as a type of speech’, a study in semiotics if you will, and he significantly states that ‘Myth hides nothing and flaunts nothing: it distorts; myth is neither a lie nor a confession: it is an inflexion.’

A tongue in cheek inference could be that the very nature of art is a myth, but of course that is another debate altogether. Historically, myth as we understand it, i.e. a sacred narrative of the world in itself, has prevailed in art. A study of the history of art, that usually includes the Western canon, reveals Biblical references, stories of Roman and Greek myths, stories of Kings (such as the Shahnameh) and epic histories (such as the Mahabharath) aptly and widely depicted. In today’s secular modern world, other issues have come to the fore. However, one could argue that myths still prevail in art, and one of the most important of these could be the myth of the modern-nation state. Indeed, today, it is highly likely that most art will also be categorized within this box of the nation-state – the classification of art has transformed from being of a period or a continent, such as the Renaissance, or the product of a particular religious psyche such as Islamic or Buddhist art, to today being Pakistani art, or American Art, or Indonesian art. This may in itself create anxieties from the artist as having to negotiate their identity and work vis-à-vis the notion and binary box of their nation of origin. Postcolonial artists have to continuously deal with this question – whereas Pakistani, or Indian, or Nigerian art demands a certain sort of language, different from the West, yet at the same time acceptable to their own artistic and historical milieu.

Coming to the question of our own nation-state, based upon a set of myths in itself (such as the justification of Pakistan’s existence since the invasion of Sindh by Bin Qasim), many Pakistani artists have dealt with the ideology of the Land of the Pure in their work, and indeed sought to complicate the narrative. In doing so, they have consciously or inadvertently addressed the issue of national ideology as myth, and the process of nation building as merely social engineering. Nationalist theories such as the seminal texts of Benedict Anderson connote that the nation is merely ‘an imagined political community, imagined as both limited and sovereign’. Hobsbawm goes further by discussing the use of symbols, national holidays, and created or reclaimed national narratives as being responsibly for socially engineering the concept of a nation state. Pakistan is of course part and parcel of this reality – especially so, as our states efforts are to distinghish itself from the ‘Other’ of India, despite a shared heritage of thousands of years.

Our anxiety vis-à-vis the Indian state, and our creation of Pakistan as opposite to it, is of course beautifully dealt in the work All Eyes Skywards by Rashid Rana. The artist uses his well-known technique of micro-macro images to shatter the myth of the nation and the unconscious and all encompassing forces that create the notion of nationalism and national identity. One of his seminal works, the work shows a middle class Pakistani crowd adoringly looking at the sky during the National Parade on 14th of August. It is up to the viewer to gauge what the object of adoration of the crowd is. Is it the fighter jets of the Pakistani army or is it the national flag, the symbol of the nation? A close up view reveals images from famous Bollywood movies of the last decade. Bollywood, that icon of Indian culture globally continues to have a wide fan base in Pakistan to the point that viewers can recognize the stills in reference to their original movies. Bollywood then, complicates the creation of Pakistani nationalism and its anxieties in relationship the Indian other.

Another Pakistani artist, Bani Abidi, also complicates the role of social engineering in the creation of a nation-state in multiple works. Her work, The News, depicts two parallel newsreels, one based in India and the other in Pakistan. The news-host, female narrates a story of a fight between two neighbours. The language of both newscasts is discernible but at points widely varying, suggesting an attempt to separate between the two. The creation of a Persianized Urdu, and a Sanskritized Hindi, post partition from the ashes of a more shared Hindustani heritage is painfully examined in her work. In addition, each of the two female newscasters while indistinguishable racially is dressed to embody the symbol of the perfect nation. The Pakistani newscaster in her shalwar kameez, with an emphasis on green, and the Indian in saffron and a sari. This complex work touches upon many themes, including the use of gender and women’s bodies to create nationalist fervor.

Historical milieu is also strongly featured in the work of Muhammad Zeeshan in his Safarnama series. His work is concerned with our shared Hindu and Muslim histories and how they are understood in the vernacular through popular religious and spiritual imagery. In light of growing homogeneity on both sides of the border, Zeeshan’s characters embody not only these individuals on the theme to travel, which has remained an important concept of exchange of ideas and cultures globally and religiously. These concepts also interweave over religion – for example Jhulelal, is dear to both Muslims and Hindus, while others are more specific to a religious group or sect. Buraq, of course is a classic representation of the ascension of the Holy Prophet in Islam. The figure here represents not only the heavenly journey that transcends space and time but also how these figures acquire meaning as their concepts themselves travel geographically in the imagination of the believers. In addition, the Buraq, as many of the other symbolic depictions in this exhibit is also part of popular visual culture. Her depiction is found in truck art, and sign painting, showcasing Zeeshan’s ability to borrow and engage with the local. Zeeshan then, is able to use local and popular culture that is used a symbol of national narratives and tie it to a much more syncretic past, thus effectively complicating our rigid understandings of nation-state ideologies.

The depiction of land and its changing nature is featured prominently in two artists’ works in diverging ways. Farida Batool’s work titled Sohni Dharti showcases where a shifting image for the viewer from a golden flower filled field to an archive of the artist occupying the space as a young girl. Pregnant with meaning, the work is a direct reflection on the nature of space and its relationship to the national identity. The blessed and sacred land, part and parcel of the Pakistani national anthem (like many others), is about a space to be protected and served. With rapid urbanizing and an emphasis on top-down heavy development many of these spaces are rapidly becoming victims of concrete structures. The artist’s works deal with this complicated anxiety of a past that is supposed to be pure and removed from violence, to a much more difficult contemporary Pakistan with supposed existential anxieties.

The myth of land, and a land like Pakistan continues to be rocked by frequent episodes of violence affecting the country has allowed for a flourisihing of art dealing with this concept. The idea of land is of course continuously explored by Imran Qureshi in his works titled ‘Blessings Upon the Land of my Love’ and ‘How Many rains must fall, before the stains are washed clean’, that seek of a land to be loved, and a land made impure by a stain of violence. The latter work is a line of a poem by Faiz Ahmed Faiz, one of Pakistan’s most famous poets, and yet another way in which national identity is formed – through culture. The works from afar showcase a landscape splattered with blood, and upon coming closer the work is made up of small flowers. Here, Qureshi, trained in the neo-miniature tradition, is harkening back to the idea of flowers and gardens in the Mughal miniature tradition, and re-imaging it in the context of a contemporary Pakistan. But in both Qureshi and Batool’s works, land, and specifically the land of Pakistan is to be loved, protected and respected. Land and land-based nationalism is of course one of the main basis of the modern nation state. Much like the sacred land of Canaan that legitimizes Israel, Pakistan’s national anthem also demarcates the boundaries of Pakistan as sacred and under the protection of a God. When this sacred land is a cradle of violence, the reaction is surely cathartic and self reflective.

Many artists in Pakistan continue to try to free themselves from the question of ‘What is Pakistani art’. If nation-state is a myth in itself where does that leave the artist from Pakistan? Given the current tragedies of a contemporary Pakistan, and the microscopic focus on it in a post 9/11 world, it is hard for artists to completely free themselves from the burden of being Pakistani. The complicated and shifting nature of our national narrative affects our contemporary artistic landscape very heavily. The nation-state as a modern myth and source of inspiration continues to inspire artists from Pakistan and our artists continue to deal with the holding the passport of a fraught nation rapidly isolated in a globalized world