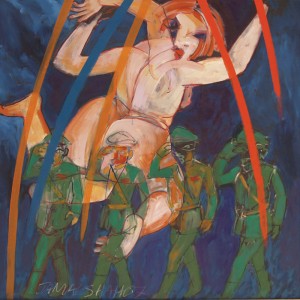 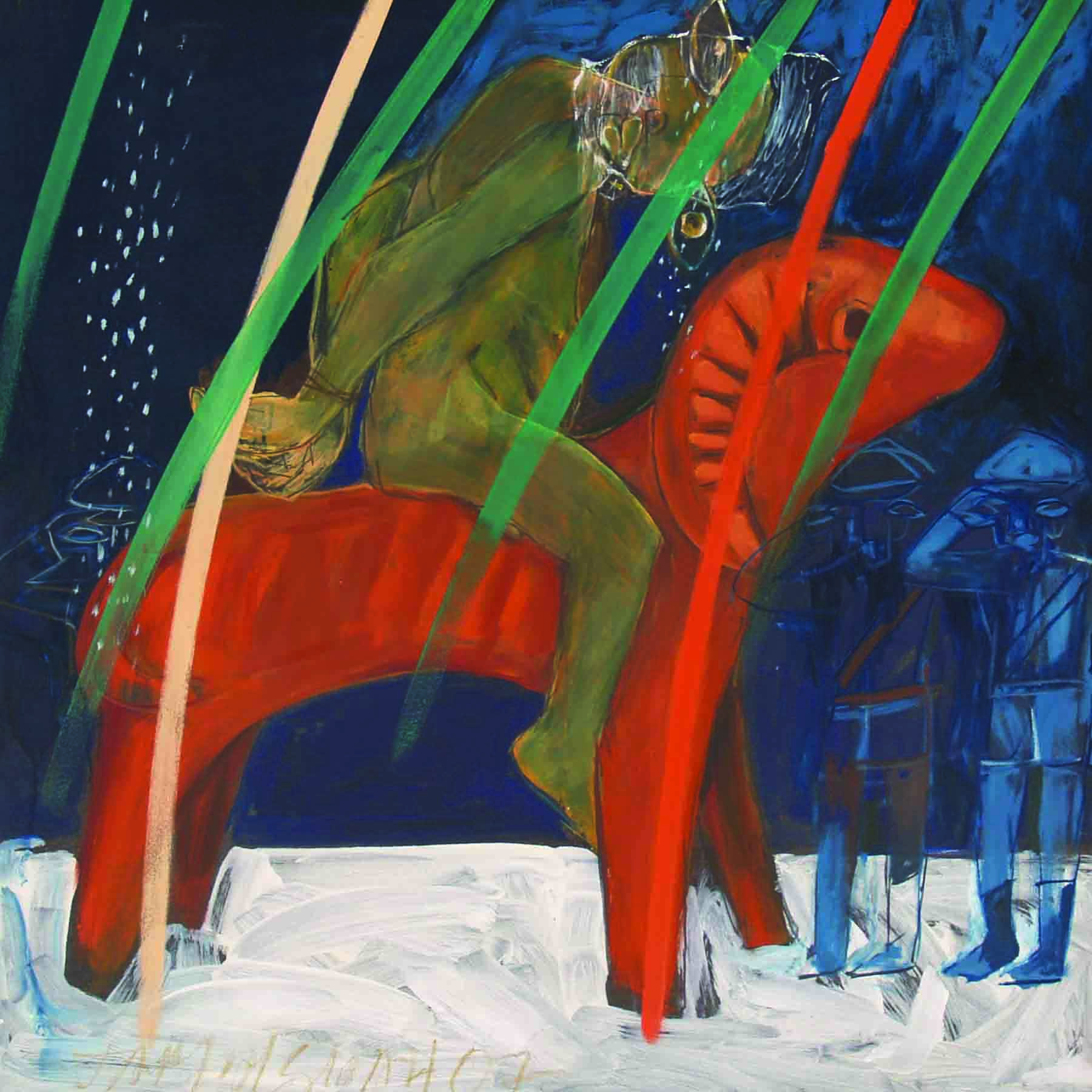 The Maverick Of Social Change Through Art

There are many artists whose convictions and varied interests have been such that not only have they pushed the boundaries of their disciplines but also dived into the other arts with equal aplomb to test their mettle and fully embrace their creative potential. There are even fewer who have consistently given back to their country with the firm belief that they are rooted in the soil of their country and are unencumbered by challenges and limitations.

Multifaceted and immensely gifted Jamal Shah is once such individual who has made a name for himself as a philanthropist, visual artist, sculptor, art educator, activist, musician, composer, actor and director. Born in Quetta, Jamal Shah earned a Masters Degree in English literature from Balochistan University in 1978. He then went on to graduate from The Fine Arts Department at NCA with a Major in Sculpture in 1984. Jamal Shah obtained his Masters degree from the Slade School of Arts with a Major in Printmaking.

As a person he comes off as a quiet, unassuming and shy person yet his life story belies this for Jamal Shah emerges as a formidable personality and quite the maverick when talking about his background and beliefs. Moreover he also established himself as an art activist whose contribution in this realm has been immense. When talking about how he came to dabble in acting and music he has no qualms about admitting that initially he did so because he wanted to rebel against his family and respond to their opposition to attending NCA.

With an unflagging and resolute belief that the visual arts are an integral part of society that must be promoted, Jamal Shah went on to establish the Fine Arts Department at Balochistan University where he remained the Head of the Department from 1984-86. During this time he also founded The Artists Association of Balochistan and became its first Chairman.

His efforts for the promotion of art and culture did not stop there for he also went on to found Hunerkada, a center for visual and performing arts in 1992 which offers degrees and diplomas in Fine Arts and Design. The school has branches in Karachi, Lahore and Islamabad. The founding of Hunerkada was a labour of love for Jamal Shah and he has admitted that the motivation behind many of his commissions was the collection of funds for the eventual establishment of this institution.

Jamal Shah’s prolific career spanning about 42 years reads like a homage to the art and culture of his country. Pride in his land, traditions and heritage coupled with the belief that art is an effective representation of a country’s image, Jamal Shah has proved this as he has designed and executed various sculptures, paintings for airports, national venues and even international pavilions representing Pakistan at expos and fairs abroad. The World Globe at Lab e Mehran in Sukkur, Quaid’s portrait on the Islamabad Highway are some of his major commissions.

The 20-foot high Iqbal Eminescue Monument in lslamabad is worth mentioning in this regard for it was designed by Jamal Shah and executed by a group of students who were under his supervision. Constructed of white marble, granite and bronze the big book of the monument shows the portraits of Allama Iqbal and Romanian poet Mihai Emineseu. It also pays tribute to famous Romanian sculptor Constantine Brancusi for it incorporates an Endless Column representing the father of modern sculpture.

Despite a successful artistic career Jamal Shah’s interests changed as he became less interested in the production of art and delved into the role and importance of art in society. Vociferous and emphatic that art must be used for constructive and transformative social change, Jamal Shah championed these causes by holding workshops and even working in collaboration with other organizations and NGOs so that art related awareness must be promulgated particularly with regards to encouraging tolerance and peace in the country.

His recent art workshop organized under the aegis of Hunerkada College of Visual and Performing Arts held in Swat called “The Face Off Camp ” was notable for its intention was to promote peace and arts in the region in the wake of the conflicts that had affected the region in recent times.  Artists, writers, activists all participated in the event to talk about violence and engage with the youth of the country on the topic. 200 schools, colleges and universities participated in the Seminar where Jamal Shah spoke saying that “The camp will engage the youth of the area to make them understand the impact of intolerance and eliminate it through different disciplines of art”. (Saeed 2014)

This stress on tolerance and elimination of violence became the driving force of his first directorial venture as a filmmaker titled “Revenge of the Worthless”, which was meticulously researched and paid tribute to the people of Swat and their resilience.

Jamal Shah has, under his belt, numerous national and international exhibitions, group and solo Shows to his credit with his work housed as part of the collections at The Victoria and Albert Museum, Fukuoka Art Museum Japan and Parliament House Building Islamabad. He has also won accolades and medals both on a national and international level for his work. An overview of his immensely productive artistic career reveals a relentless pursuit of discovery, transformation and change in his work for he has worked in numerous mediums and scales but primarily prefers painting and sculpture.

Citing the importance of identity, Jamal Shah feels great pride coming from Quetta for his belief is that the people of Balochistan in particular share a special bond with their culture, landscape and community and this is reflected in their creative output. Though he does admit that youth of today have been deprived of alot of knowledge about their cultural heritage and it was important that that they be nurtured so that their own cultural narratives can begin to emerge.

The essence of Jamal Shah’s own artistic output also imbibes from this ethos for the motifs of his paintings and their execution which is raw, coarse and almost visceral seems to derive from the  primitive aesthetics of Mehargarh figurines, animals and pottery patterns.

Faces with large fish eyes, archaic forms resembling animals, a melee of figures and animals all vying for space through gestural strokes coupled with intense colour and layering of form sums up one’s initial reading of the works. Subtle differences emerge when themes are identified.  Symbolism pertaining to human bondage and oppression emerges as one dominant theme in a composition where a large man with his hands tied behind his back on a ram-like animal is saluted by faceless figures in khaki uniform. The khaki figure is a dominant theme in other paintings as well;  Saluting figures  march in file as they are overlapped by a  distorted, voluptuous female figure suspended in the act of tumbling down, is it a benediction to freedom harkening back to testing times during military dictatorship perhaps? An inversion of Delacroix’s “Liberty Leading the People” perhaps? Jamal Shah has never tired of mentioning the restrictions and imposition of censorship during the Zia era.

Other compositions as suffused with intense colour and demonstrate an interest in Fauvist experiments and Gaugin’s mysterious landscapes for the compositions are riddled with conflict and tension where men and women face off animals, romp amongst them as composite mythical figures or are trampled by them. The melancholic angst and unshed tragedy becomes edgy and violent because of its execution. Mangled bodies, gestural strokes and medusa- like flailing arms are an unsettling sight in one composition while the raw and violent sexual energy of two twisting bodies on a chair as a cat looks on as a helpless, mute witness attest to a concern in gender relations. They allude to monumental themes and emotional narratives that speak of base desires and emotions such as lust, tragedy and intimacy.

Jamal Shah’s multi dimensional personality and passionate nature lends itself to a multitude of disciplines and many concerns that encompass the social, political and emotional aspect of our lives. It is then not surprising that he is rooted in his land- it is his lifeblood and fodder for inspiration.