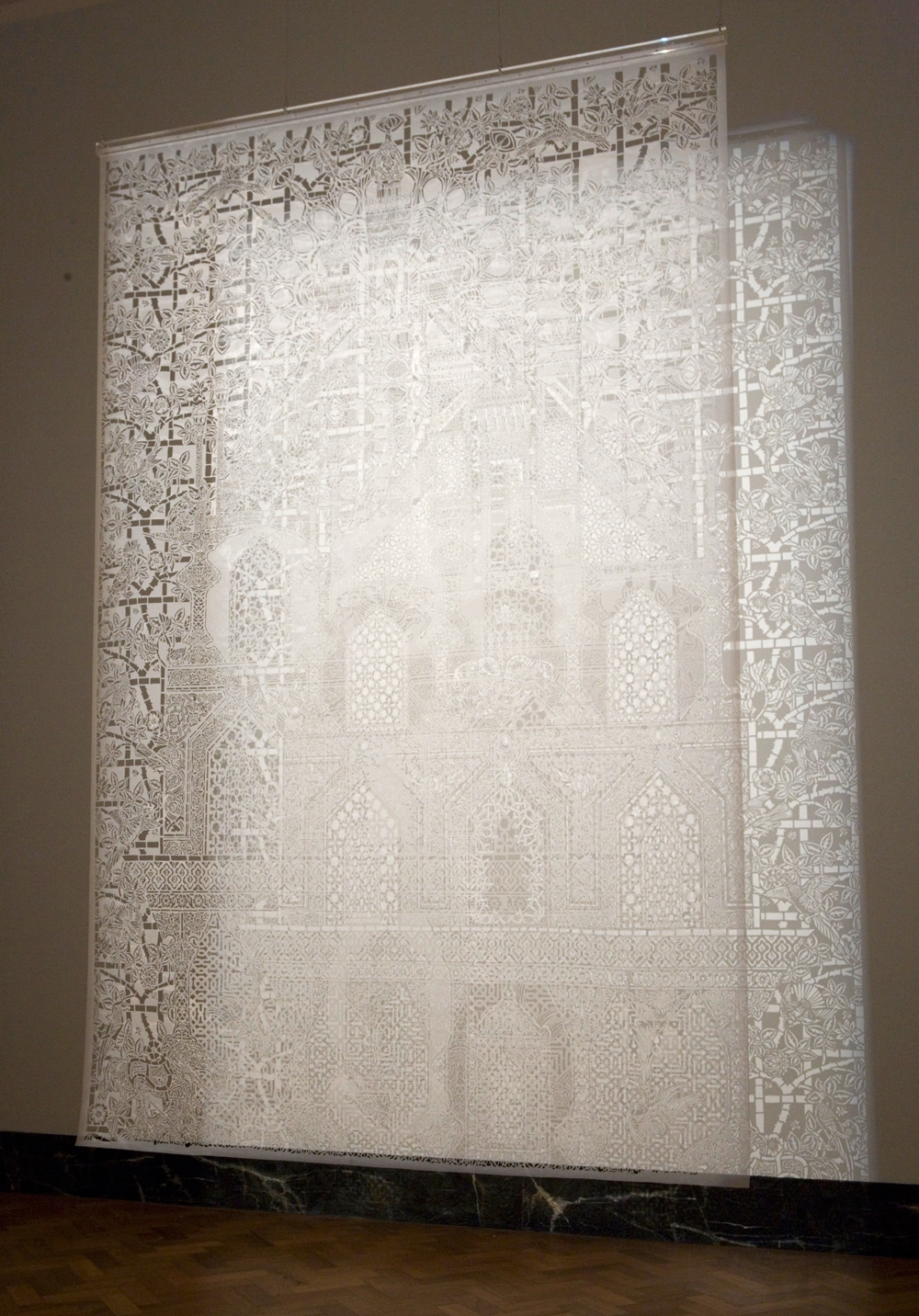 In her 1991 study of the history of Islamic art, British scholar and curator Barbara Brend made the following observations about its potential meanings: ‘It may be an expression of religion, of faith read in the assured and stately progress of writing across a page or in the calm … cloister of a mosque. To a non-Muslim it tends to evoke rich and mysterious decoration … To a tourist it may first present itself in the form of distinctive shapes, the noble swell of a dome hovering over a city skyline or the assertive silhouette of a minaret against a sunset. For the curators, specialists and students who have been gripped by the subject, Islamic art is a world of irresistible fascination in which they strive for a better understanding of the objects and of the people who make them.’ When it comes to the framing, exhibition and reception of art and design inspired by Islamic tradition in prestigious UK institutions – such as the V&A – I suspect that these notions, perhaps a little tinged with a benevolent Orientalism, continue to hold today.

It was a likewise mixed audience, comprised of tourists drawn from all parts of the globe (Muslim and non-Muslim), families accompanied by curious toddlers, and the occasional solitary connoisseur, which kept me company on the Saturday afternoon in early March on which I visited the V&A Museum to review the exhibition of works shortlisted for the third edition of the prestigious Jameel Prize. At the moment this South Kensington gallery, a Victorian ‘treasure house of amazing and beautiful objects’ notable for their ‘diversity’ (including Islamic ceramics, textiles and carpets from the Middle East), is in the grips of a ‘FuturePlan’, aimed at ‘bringing the V&A into the 21st century and restoring modern design and innovation to [its] heart”.

The Saudi-supported Jameel Prize seeks to explore the contribution of contemporary Islamic arts and crafts to wider debates about Islamic culture. It seems in keeping with this vision that, as one turns into the spacious ground-floor Porter Gallery, which hosts the selected entries, it is the award-winning works of the Turkish fashion designers Dice Kayek which first capture the gaze. Illuminated in the furthest corner of the gallery and suspended like mannequins at the end of a catwalk, these sculpted garments, futuristic in style, draw on aspects of their creators’ architectural heritage, craft, and sartorial traditions. Most notably, they allude to the sacred domes of Istanbul’s Blue Mosque as viewed from the interior, evoked by the ballooning shoulders of a hand-stitched white satin coat. They also convey the Byzantine opulence of the converted Hagia Sophia; the hybrid building’s Christian origins seem reflected by a second cape’s elaborately beaded and embroidered sleeves, arched like angel wings. The contemporary, syncretic Islamicate aesthetic the designers showcase is assertive, cool and sophisticated, but it remains an impression formed of surfaces; Istanbul Contrast does little to engender the deeper reflection (cultural, but also spiritual and political) hinted at in their rubric by the conferrers of the Jameel Prize.

Previous beneficiaries of the biennial award have utilized elements of Islamic culture to offer more challenging perspectives of contemporary realities, within and beyond Islamic worlds. The 2009 winner Afruz Amighi’s shadowpiece 1001 Pages, made of scored plastic sheeting used to shelter refugees, cast Iran’s complex history in shades dark and light. In 2011, Aisha Khalid won The People’s Choice, the sharp pins of her Kashmiri Shawl subtly pointing to the pain inflicted on the inhabitants of the region from which such luxurious commodities are sourced. The work of designers like Rahul Jain, his silk textiles featuring newly reinterpreted Mughal patterns of snow leopards and birds of paradise, inject shining life into the present show. Typographers including the Beirut-based Pascal Zoghbi, also included, perform important functions, inventing newspaper and signage fonts which reconfigure the Arabic script along clear, bold, attention-grabbing lines. And miniaturists such as the Lahore-based Waqas Khan may induce intrigued crowds to raise a magnifying glass to their eyes and admire the miniaturist’s pointillist precision, the steadiness of his hand, his extreme care. But in an era in which our Western media has been inclined to portray Islamic affiliations as suspicious, I was more struck by the words that accompanied it, and echoed from the video playing at the gallery’s entrance. These drew attention not to the skill of the artist but rather the hoped-for effect of his work on the viewers: ‘through my work I want them to be peaceful for some time’. For, it is those artists who redeploy Islamic artistic traditions and crafts to comment on delicate matters of present (geo)political concern – Florie Salnot, in her collaborative jewellery project with displaced Sahrawi women Plastic Gold, or Laurent Mareschal in Beiti,a fragile, ephemeral installation stenciled out of spices, which presented geometric floor-titles based on Palestinian designs easily scuffed and scattered by passing feet – whose work ultimately proves the most arresting and compelling, and perhaps the most true to the Jameel Prize’s stated goals.

Madeline Amelia Clements’ doctoral thesis from the University of East London was entitled “Orienting Muslims: Mapping Global Spheres of Affiliation and Affinity in Contemporary South Asian Fiction”. She undertook a two-month Residency at the National College of Arts, Lahore, when she explored the framing and transformation of “violence” in contemporary Pakistani art and English language fiction

17 Responses to The Jameel Prize