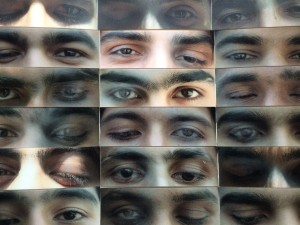 The Individual Artist: Carving-Out Oneself

A priori, if a man

he must formulate his answer to the question

am I a vessel

“It was that phone call”, says Farida Batool in one of our casual conversations, “that made me think how helpless a woman is in this society”. Talking about her days when she started with a doctorate program in the UK, as a divorcee and single parent of a young toddler, her father at that time a serving judge called her when she shared her interest to come back to Pakistan, politely suggesting to stay where she was as her marital status would make it difficult for him to protect her from the impertinence of society. Reflecting on how a man with such immense power felt so weak, her work began to revolve around the questions that arose with her experiences. This is just one of the instances that reshaped her artistic conceptions.

Conceptions and visualizations are always simultaneous. It was Batool’s capacity to feel, to know and to execute at various degrees and speed. Her true, creative work is a blend of knowledge and mastery of dynamics, optics that gave life and shaped her inner vision. Three worlds, the physical world, the intellectual world and the world of the spirit function are expressed simultaneously in her works. The unity of the three and the welding together of many arts and movements bring out her individuality.

An artist’s contribution to the world of art is a step towards being true to oneself. The intense exploration of myriad of thoughts brings out the individual’s realization of a certain conception that dwells in the divine understanding. There is always an essence in the form of an idea prior to its existence; artisans play with their ideas in their own individual manner. When God created each one of us, He had a plan as a supernatural artisan; when God creates He knows precisely what He is creating. The conception of man in the mind of God is comparable to that of the paper knife in the mind of the artisan.

Human natureis a universal conception. There is a fine line between existentialism and individualism when there is a deep concern in finding the self and the meaning of life through free will.The experience that we earn carves out who we are. A person first of all exists and then encounters the world, surges up in the world and defines herself afterwards. It is not what she conceives herself to be but what she wills. Existence is there, but is mere nothing next to that which she makes of herself. This leads to the path of freedom and self-realization.

Batool’s self-actualization phase began with close encounters in political rallies with her father at a very young age. This soon became her physical world that seeped into her intellectual world. Experiencing the effects of society from a different perspective, she evolved an instrument of thought aided in cutting through all cultural opiates, past and present, bringing out a true vision and an idea to be revealed with clarity. Her works soon became metaphors of the political upheavals experienced during the Zia period. She eagerly devoured the disorder of that particulartime and brought out the creative period in art to her works.Through multiple photographs layered in lenticular prints, she confronts her own emotions and her duel perspectives, in a society that remains the same, discriminatingagainst her for being a woman.

Farida Batool placed herself as an individual on the stage of the art-world. She took this journey walking straight and alone, holding against every challenge of triumph or failure, crossing the darkest and wasted valleys and coming to a clear air and standing on high and limitless plain. Her imagination is not dusted with the laws of fear;itis one with Vision. The work becomes the image of the idea, precisely knowing what she is creating, exactly the way she was created by the Creator. Her revelations manifest meaning that could not have existed without a profound concern to achieve a purpose beyond vanity or ambition. Her individuality as an artist speaks volumes;her creation, dominates her destiny, she creates today and she creates dangerously.

Her practice is not immersed in a movement, but in something much rarer: she is an authentic individual. Movements have only existed when people seek to be part of a group follow the norm, and find security through them. The only free person is the leader, not afraid to draw apparent contradictions from, nor develop fear of making a terrible mistake. In fact such mistakes become a springboard for her works to flourish in a generous spirit of a great adventure. In her Dekhna Mana Hai! (Seeing is Prohibited) four hundred and fifty lenticular prints of eyes blinking and changing direction, emulates her paranoia of being under constant surveillance by the Taliban, the State and media. The viewer experiences the‘eye’ focused on her existence. A few minutes of experiencing the blinking and staring leave the viewer insecure and uncertain, whereas the artist behaves with casual indifference to conventional wisdom.

Allying herself with culture and preserving those elements of revolt and transformation, she is advancing with leaps and bounds. We see her work as an expression of the society in which she lives, aggressively stirring its stagnancy. Her experiences have chiseled her into a unique artist, who avoids proposing simplistic solutions that actually resolve nothing; instead, she but incites thought for active intervention.