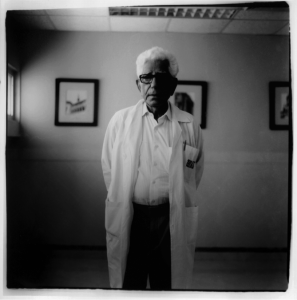 The Boys’ Playground by Arif Mahmood

The celebrated photographer Arif Mehmood’s work has traversed various moods in the arc of his timeline. Rather than just pure documentation, it is his ability of capturing the raw essence of the moment that makes his work bold yet ethereal.

His recent exhibition at AAN Gandhara Art Space, ‘The Boys’ Playground’ was displayed in Karachi from February 22nd to March 16th, 2018. Curated by Malika Abbas, in this body of work, Mahmood very humbly shot portraits of 15 men who are the current pioneers of their field. For this series, Arif photographed them on the 6 x 6 square format on film, dedicating one roll of film per personality, amounting to 12 negatives per subject on an average. [1]

Portraits and portraiture started out as paintings. Usually, these types of portraits were done to show power, status, and nobility and were typically reserved for the wealthy. However, once photography became popular in the late 1800s with the release of cameras, portraiture became popular and was more accessible to the masses. With Mahmood’s study of the fifteen said men, it reminds one of the pioneering photographers of celebrity portraiture photography, Annie Leibovitz. The simplicity of Leibovitz’s photos are what make them so striking and truly encapsulate the goal of portrait photography, which is to say a lot with a little; and that is exactly what Arif has done with his subjects.

Mahmood works in black in white, but here there is more grey than either extreme. With his careful use of natural light, he seemed to have captured the quiet strength of each one’s persona. Upon the chance of an interview, Arif mentioned the reason as to why he chose his subjects: to that he said he had already been following the people in their line of work for the past fifteen to twenty years and it makes all the more sense to capture their essence now (mid career and beyond) more than ever.

From Jamil Dehalvi comfortably seated in his room to Dr. Adib Rizvi in one of the rooms of a hospital, all the portraits are captured in the subjects’ own private sanctuary. Of all the portraits that were taken, the portraits of Amin Gulgee, Prof. Afzal Ahmed Syed and Jamsheed Marker stood out the most from this exhibit. The portraits of Gulgee and Afzal Ahmed seem to have been blurred in the act of documenting it, almost as if capturing their restless souls. Whereas the portrait of Jamsheed Marker had exquisite mark makings of white on the alternating beautiful grey/black surface of the photograph. When asked Arif Mahmood about the marks he replied it was in fact the quality of the film that he purposely used. Not that the present result was anticipated, but it was rather the result of a twelve year old refrigerated film that gave the beautiful result of white and black marks on the entire surface of the photograph.

This exhibition is a further testimony of Mahmood’s visual expression of his worldview and the humble representation of the men in their set fields of career.

This exhibition was displayed in Karachi from February 22nd to March 16th, 2018.