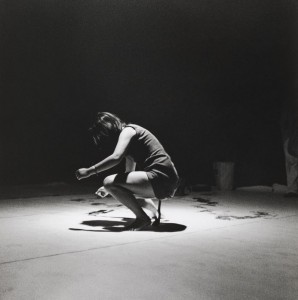 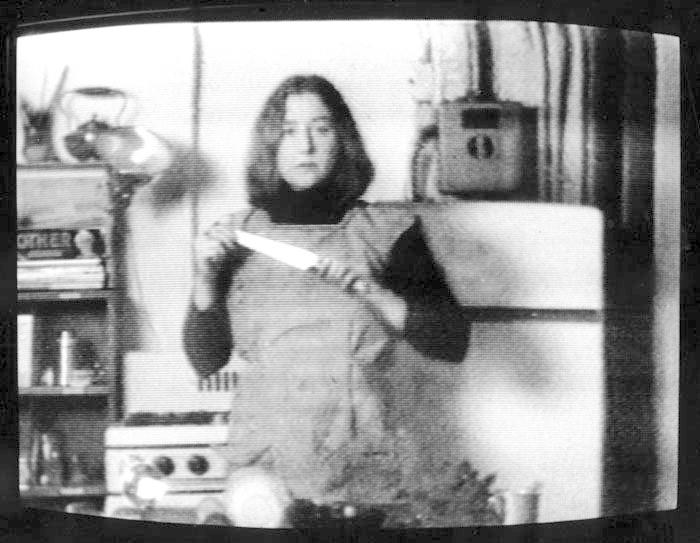 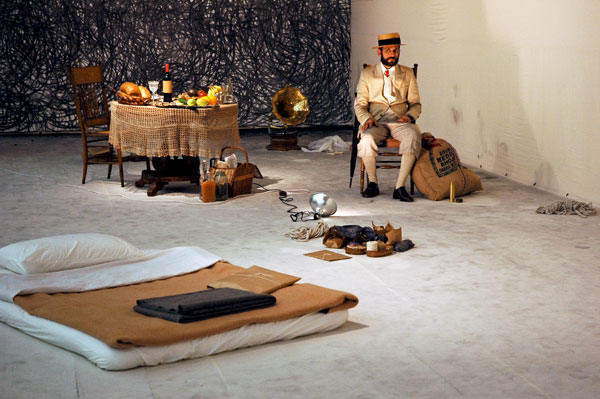 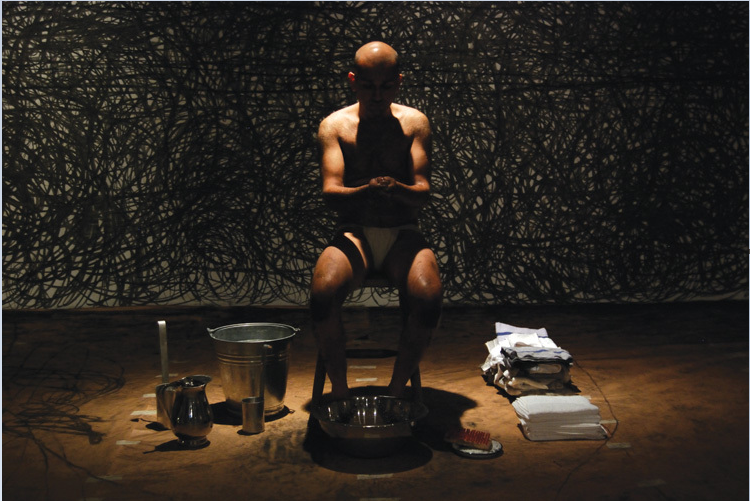 The Body is Present

Body has mysteriously found ways to enter into art and literature. Body art intrinsically is to acknowledge the presence of the body during the process of making or doing, and/or in the conclusion of it. It allows the artists to connect to the expanse. It provides one with tools of reliability and readability. The tactile body and its representation as a medium in visual arts commenced in the late 1960s in Eastern America and Western Europe. Its so far short lived and fairly recent advent hasn’t caused any hindrance towards its transformation and impact on art practices in other corners of world.

Over the years artists have invariably incorporated the body in their work as a performative tool, and simultaneously used it as a performative subject to be documented, filmed or photographed. In works like ‘Anthropometrics of the Blue period’ by Yves Klein or ‘Vagina painting’ by Shigeko Kubota, one observes how the artists use the body as a tool to apply paint on a surface, actively exercising various parts of the body – the body becomes a sight of action. We also have an entire generation of American performance artists who used body as a ground to challenge its physical limits. The performances done by Vito Acconci where Acconci burns the hair off his chest in ‘Conversion III’ (1971), Chris Burden’s ‘Shoot’ 1971, a video performance where Burden’s colleague shoots him in his arm, and series of performances in ‘Relation Works’ by Marina Abramovic in Ulay. The static and dynamic agency of body in visual arts has allowed the onlookers of the art history to define the medium as ‘Performance Art’.  Often quite confusingly, one ponders upon its association to ‘Performing Arts’, where enactments such as drama, music and dance define the medium.

Performance Art, as the term incessantly implies is the active use of the body as the dominant medium. Performance activates the ‘self’. The moment where the fragment of the self expels in internal menace, it transforms into external menace. Performance art is not merely a distanced enactment of a distant character. Unlike drama, performance art is immersive.  The moment where the self exceeds beyond itself, it intriguingly creates an oeuvre of self-reflection, drawing more significance to the presence of the body and what it enacts.

Performance art actively instigates the interpreter. It needlessly abstains from defining or subjecting the audiences’ role. Unlike theatre, the audience of a performance is free, and the boundaries are porous. Performance art deconstructs the fourth wall of theatre, and in turn creates a circumference of summons around it.

Performance art is no longer an anomaly in Pakistan. In recent years, one quite often comes across a performative work in a group show. It may be a solo performer framing the body in a particular position for a particular duration, a duet/group performance, or a performative act happening repeatedly through out the opening of the exhibition. Artists often perform their works themselves, and other times commission performers (art students, or emerging artists) to perform their works.

The onset of performance in the contemporary art of Pakistan isn’t a matter of surprise. South Eastern cultures are innately performative. One finds the peripatetic, the shamans, the darvaish, and their performative costumes and rituals through out the landscape. One also locates in Pakistani and Indian society an underlying sophistication and sincerity towards performing religious ceremonies. Pakistan’s terrain is weaved in understanding and acceptability of the body as a stage for performance. In contrast to a minimal performative aesthetics of the West, Eastern performance artist fuse into their work strong essence of culture calling into perspective regional languages, costumes and rituals. An analogous sensibility can be found in the works of Nikhil Chopra. Chopra fuses into his performance elements of theatre, and creates fictitious character adorned with exotic attires and costumes. He incorporates into his works a nostalgic homage to his Kashmiri heritage. His work invokes a sense of meditative silence.

Performance art is transcendental, immersive, and raw. Its beauty lies in the unhindered and exposed enactment.  There is no pretense in performance, nor does the performer attempt to fabricate the experience. Just how one witnesses a certain kind of transient rawness that lies in the whirling shamans who put a dhamal at the ingresses of shrines and mosques. How they allow the body to enter into a state of mediation and channel the energy of the body and mind to exude spiritual sensation. One finds similar transcendental influences in the works of performance artist. Where they are not acting the performance, they become the performance. This draws into the work not just a mental transformation, but also a physical one. The bodies of the performance artist undergo the painful transfiguration, and body takes toll of the physical trials and confines. Often performance artists injure, bruise, and hurt their bodies during while performing.

‘Rhythm 5’ by Marina Abramovic is a long durational performance where Abramovic constructed a five pointed star made of wood and wood chip soaked in 100 liters of petrol. She set it on fire and lied down in the middle of it. As the flames increased consuming all the oxygen, she began to feel suffocated and lost consciousness. The performance had to be abruptly ended when Abramovic had to be dragged out by one of the viewers after noticing that she had stopped moving. Abramovic initial performance works were inspired by her Yugoslavian identity, commenting on the war and unsettling childhood she spent. Abramovic mutilated and hurt her body in most of her early works, as it led for her to reach a physical and mental numbness. Her performance acts moved towards a greater simpler language where she tested the limits of the body through prolonging the duration of her performances to days or even months. The longest physically challenging performance is ‘Great Lovers: The Great Wall Walk’, where Abramovic and Ulay walked the Great Wall of China. Abramovic started at the Eastern side of the Wall while Ulay started at the Western end and met in the middle.

Art Historically the most pivotal and dominant moment of advent of performance in Pakistan is the satirical sketch ‘Handa Hubaalna’ a video performance performed by Salima Hashmi and produced by Shoaib Hashmi & co in the early 70s. The video introduces the performer as a generic cooking host who throughout the performance attempts to demonstrate the recipe of boiling an egg. The act, which by its very nature seems quite simple, later gets exaggerated to a point of ridicule and hopelessness. The video is set up in a domestic setting where the backdrop and the objects symbolize conformity. The underlying parody, naïve performative tone, and the subtle gestures while at the same time the disturbing struggle to boil an egg add to the tension in the video. The satire moves into a space of dark humor and the audience gets fixated between a humor and defeat.

The performance ‘Handa Hubaalna’ aptly draws parallels to the video performance ‘Semiotics of a kitchen’ by Martha Rosler in 1975. Both the videos employ a strong sense of criticism of domestic space and the distinctive representation of women. One duly cannot deny the advent of body as a performative tool; while at the same time enhance the ephemeral and transitory property of performance.

In the contemporary landscape of art in Pakistan, performance holds an exclamation point. While art students, practicing artists, galleries all contest to its place in the art discourse, one finds a grave hesitation and unpredictability of the medium in terms of the art market. The fact that the performance offers an experience rather than an object, its value is measured in the critique and not the currency, leaves the parameters of its intentions deeply unguided.

With a very recent solo show of the renowned artist Amin Gulgee titled ‘Washed Upon the Shore’, curated by Zarmeene Shah at Canvas Gallery brings together performative, sculptural and installation based works together. While one finds performance to be a recurring medium in Gulgee’s work, the exhibition creates an stimulating and contrasting dialogue between the over powering metal sculptures, parallel to a silent performances where most of the performers wore white costumes. Exhibition like these aptly allow for the art viewer to begin creating a contextual discourse of performance based work along with object based works.

Performance art highlight an inter-subjectivity, it opens up the closed system of modernist perception and criticism. It redefines the connotation of the object. The ‘object’ brings together the process of reception and production on mutual grounds. Performance art perhaps is not an exclamation point. It is conceivably a comma projecting the dialogue of ‘art’ further, extending the possibilities of meaning and expression. It brings dynamism within the static and often isolated relationship present between the artist and the art object, by employing into the work presence of the audience and the artists body. The viewer potentially leads the performance-based works to unrequited territories and unthought-of apertures. Performance is merely not an end in itself, rather a probability of endless interpretations in the future.

“‘The relationship among artists, subject and public’ – encourages us to rethink the very methods by which we fabricate histories of art and to rethink the ways in which we understand meaning to take place” 2  – Ira Licht

Natasha Jozi is a performance artist, poet and writer. With a Masters in Studio Arts majoring in Performance art from Montclair University, she currently resides and works in Islamabad.