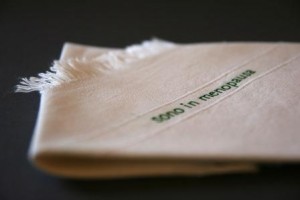 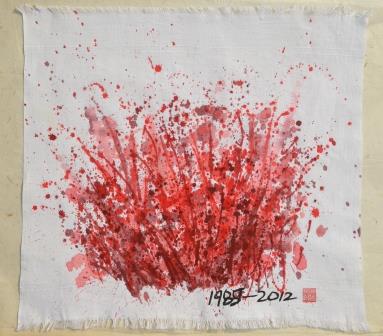 The Blood of Women-Traces of Red on White Cloth

The square white or ivory colored linen clothes, folded, creased, stained, frayed, embroidered, are primitive tampons or menstrual pads that belong to the cultural history of our grandmothers. They are a representation of unspeakable secrets, relics punctuating the trail of life and death.

Until the 60’s, these fabrics collected women’s moods, the unfertilized eggs, the potential embryos and were powerful objects for women. The neccessitiy of washing them meant women entered into close physical relationships with their materiality. These tools of menstruation marked confidential/intimate moments between different generations of women or embarassed silences among family members of different gender.

One day when Manuela De Leonardis (curator and founder of the project with Rossela Alessandrucci) came across a flea market stall with a stack of those diapers, she knew without doubt the symbolism of these objets trouvés was endless and spoke of universal rites of passage. De Leonardis is not new to this exploratory process based on a found object. She curated two previous exhibitions in this way. Cake, a book project was born from an anonymous recipe book she bought at a charity shop in London. It became a book and a series of performances in support of Bait al Karama Women’s Center of Nablus, Palestine and the exhibition The Great Illusion which originated from 128 romance novels Manuela found next to the garbage bin.

This exhibition surpasses both the “Red Flag” of Carolee Schneemann (the American artist who in an historical performance removed her tampon in public) and Cindy Sherman who used the color of blood and disgust in works that witnessed organic waist, including vomit. Today’s female artist’s question themselves in a less expressionistic and more conceptual manner. For example, in the exhibition is the prayer rug by Maimouna Guerresi that becomes a kind of shroud, with traces of feet, documenting the journey toward a human destiny steeped in losses.

The American artist Susan Harbage Page focuses instead on the two red initials “A.T.” that were found embroidered on the cloth she was given by Manuela. The initials are the only evidence, the only “identity kit” of a woman she imagines to be a nun, who passed through this world laughing, laboring and crying before she was eclipsed. “Bleed,” embroidered in red by Harbage Page closes the invisible existential path uniting the two women across time in the textile. The Argentinian Silvia Levenson sews with beads the silhouette of a bomb, choosing to speak of feminicide instead of the joy of birth.

The Indian artist Ruchika Wason Singh explores the depth of emotional and psychological experiences by focusing on two significant dates, the start and stopping of her menstrual cycle in 2012, during chemotherapy treatment. “Within the stains I seek to map the presence of my body, and a stage of my femininity; reclaiming and celebrating it in my art.” she said.

For the Saudi Arabian Manal AlDowayan a diaper becomes a social place: using archival images she reflects on the inferior condition of women, which is still in force in her country. Japanese artist, Elly Nagaoka explores the suspension of menstruation, painting in oil the words “Sono in menopausa” (I am in menopause). She folded her cloth and put it on a shelf accompanied by an inscription written in Japanese thanking “the work”, not only the cloth itself but also the female body that has toiled so hard, across the span of its fertility.

Menstrual Traces for Women Artists. The Blood of Women: Traces of Red on White Cloth a group exhibition at Teatro Stabile Comunale of Isola del Liri through May 14th 2016.