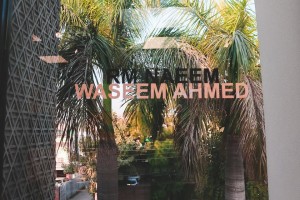 Indeed the duet performance gave anyone and everyone their share of excitement of being part of a combination that veiled much greater bearings of knowing. All of the anticipation came not only with the appreciation of the combination of the two but rather with their theories of representation. It all came to be at the O Art Space gallery on the 25th of February, curated by Irfan Gul.

Naeem and Waseem Ahmed had featured thirteen works in total where each artwork was systematically synchronized with the other. Viewers were dwelled within the visual harmonies of two and the model of exemplifications.

The symbolic function of an entity exists when that particular symbol is seen against an atmosphere of a certain context. The appropriation of these entities comes from within and the dialect that ceases to behold the beholder. RM Naeem had convoyed a pictorial plane which incorporated perhaps the deepest of this concerns in tones subdued with symbolic associations. Connotations that acted against and out of surfaces dark enough to introvert the viewers’ attention and proceed him with a share of his narrative.

His subjects were dressed in black and white certainties, becoming a part of a greater dialogue with spaces that they were against, and the blocks of colour that took a part within the whole of the accommodation. Naeem’s body of work traces the motivation that he acquires from intense observation of the surroundings that his subjects and the analogy of connotations they exist from and within. The constant repetition of the colour and the symbols dignify a realm in which all of the things around him seem to function. Symbolizing the horse, the head of the Buddha and the cupid speak of silences yet with holdings of structured and mounted energies that flow from and through the pictorial plane. Within the play of the dark and the light, subjects elevate amongst structural bearings, where they become a part of those demeanors yet withhold this tension of division. A division that speaks of his concerns meeting halfway.

The beholder takes away his concerns from these associations and his embankment of these subjects. More of a greater concern for R.M Naeem himself are the dialogues versed from these infinite and deeply spaced compositions questioning, or perhaps even compelling, one to answer dimensions of realties and the illusions that come with. Creating passages within the mind of the viewers to evoke patterns of chronological and logical thinking,

‘’A picture that represents – like a passage that describes – an object refers to and, more particularly, denotes it.  Denotation is the core of representation and is independent of resemblance ‘’

Nelson Goodman, in this statement of his, talks about the realistic representation and its dependence on the use of certain conventions where symbolism is a sign established by conventions, which stands in fixed relation to what it symbolizes.

Waseem ahmed’s body of work has immersed from similar associations which comply stances of symbolism adopted for mechanisms that adhere to the human race on socio-political borders. The artist scrutinizes the realm of situations that have become a part of our existence, the existence that foreplays terror and violence in the most provocative ways. The sensitivity within his imagery fluids even greater complications that, with closer speculation, reveal a string of myths synched with realities. The rendering of the stylized and the known deepens our concern as beings constantly getting wrapped in folds of terror that no one seems to escape.

He has referenced the Greek god of war with the imagery common to the man of this region, a harmony within a harmony, a dialect within a dialect and a contradiction of the human nature within its existence.  With his mix medium assertions he connects the beings with the aura of violence tattered with a hint of neglect and mystification. No one can escape his striking assertions of the balance of the elements that co-exist – embodying colours and references which make the beholder grasp their knowledge and root their connections and logical conventions on immediate bearings.

Dramatic and empirical in fauna, the artist committed to shatter all representational similes and celebrated the act of nature where the phenomenon of war and violence is as old as any tale.  The violence that penetrates his surfaces connects with his symbolic associations of the hybrid of the goat and the human, speaking of greater disturbances within such peaceful acts. The elevated narratives and the structured silhouettes with darker renditions bring together the silences that grow within each of us. Gathered amongst and within the traditional miniature school of painting’s reference of foliage, it only goes on to state needless boundaries and elements of much needed secrecies.

The fact that a picture, to represent an object, must be a symbol for it, stand for it, refer to it yet no amount of resemblance is ever adequate enough to establish the indispensable relationship of reference, nor can ever a reference be necessary for a reference – for anything and everything may stand for almost anything else. The relationship of art and language ends where it concerns the means that can be used for communication. RM.Naeem and Waseem Ahmed transmitted the contents of representation on much profound bases where the transfusion of intellect and energy is what had been beholded.