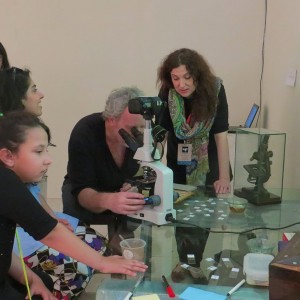 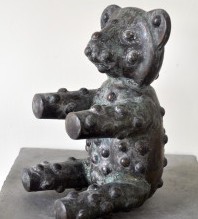 THE BAZAAR, ARCHIVE AND THE CURIOUS ARTIST

The 90s represent a seminal period in Pakistani art: The spotlight shone on Indus Valley School of Art and Architecture in Karachi as a group of like-minded artists set out to revitalize and irrevocably alter the artistic trends prevalent at the time in the city by attempting to challenge a fossilized gallery system that centered around promoting western late modernist art.

Collaborative art projects, the repudiation of studio based art and a profound interest in found objects and urban material culture formulated the basis for what was to become “Karachi Pop”- the credo that challenged the status quo.

He worked as a lecturer at the Glasgow School of Art and also maintained a landscaping business. Trips to Karachi opened his eyes to the myriad possibilities the city had to offer in terms of vernacular aesthetics, processes and materials and he decided to settle in the city. (Hussain 2002)

The early years of Chalmer’s career consisted of bodies of work whose locus was the city with its sites, history and visual culture. Simultaneously he was also unraveling the possibilities of pattern, material and process found in truck art.

“When I first went to Pakistan I was very excited about the prospect of working with small industry, being able to cast metals…” (Southbank, 2014)

This interest led to collaborative works like “Heart Mahal” in 1999 where he and other artists worked with craftsmen who added their own touches to the drawings submitted by Alesworth and his colleagues created a vernacular hybrid world inside a 20 foot stainless steel container. While the far wall featured a pumping heart in neon lights as if to suggest, literally the soul of the space, every surface on the remaining walls was covered edge to edge and chock full of iconography that blurred the line between high art and craft. Neon lights, Chand sitaras, buraaqs, and mihrabs vied for space with found objects such as Pakistani bride dolls with tennis rackets thus celebrating the contradictions and visual realities of a culture in flux. The project also questioned the agency of the craftsmen as they added their own touches to the works and brought their own binary visions of local/foreign to the table signaling the emergence of a new aesthetic. (Nasar 2013)

The project was eventually installed at Fukuoka Asian Art Museum, Japan and followed by “Very Very Sweet Medina” (Home Sweet Home) a title that drew analogies with the Prophet’s (PBUH) Migration with the historic migration of the inhabitants of Karachi at the time of Partition and along with truck artists also involved cinema board painters. This collaborative project was installed at the Queensland Art Gallery, Brisbane, Australia.

In 1997 Alesworth collaborated with Adeela Sulaiman at Frere Hall to be part of “The Promised Lands” project. Themes and motifs in this particular project recurred in the later half of Alesworth’s ouvre. Other influences that seeped into this particular work seemed to derive from his career as a horticultural consultant and landscape designer.

Alesworth describes his outdoor installation “The Garden of Sir Bartle Frere” at the Frere Hall in the following words:

“The way that I conceived it was the heart of the kashan carpet, these trees all along this courtyard, lignum trees which are the trees of life and were once considered the cure for syphilis (but I don’t think they were). I lined them with these yellow lights and we put 88 lasers into the crowns and turned them into this heart of the carpet. We added these three minarets to the center which were sort of in dialogue with the spire in Frere Hall, the idea being that I looked at it as a mausoleum for Sir Bartle Frere. It was a secular use of the minaret, a bit like Bhai Ram Singh’s architecture in Lahore” (Southbank, 2014)

This interest in colonial history, research, carpets and the natural environment would recur in his later works executed in Lahore.

One of Alesworth’s last notable site specific projects in Karachi consisted of sculptures he constructed resembling missiles ( he called them”Probes”) in varying sizes that he placed amongst the shops of fruit sellers in order to comment on the proliferation of weapons and nuclear technology, albeit in a playful and humorous way that alluded to the absurdity and reality of such ambitions harboured by a third world country. (Hussain 2002)

This paranoia and fear of life also echoed in his teddy bear sculptures executed in 2000 and 2002 in bronze and copper where the function and meaning of a benign and cuddly stuffed toy was subverted through material and texture. Cold, hard and marred with discolouration, their surface was evenly pockmarked by rounded obtrusions, as if resembling the tops of rivets.

Alesworth’s move to Lahore was significant and the tenor of his work significantly changed with inquiries into archiving, colonial history, garden history becoming the mainstay of his art practice.

He began to examine the city and excavate its history “by seeing himself through the lens of the British colonial traces”. (Murtaza, 2017) This interest manifested itself in an exhibition titled “Gardens of Babel” (2009).

The exhibition was significant because it marked a return to earlier motifs used in “The Promised Lands” project: the iconography of carpets and an interest in horticulture. Rather than working in an actual outdoor space as with the “Promised Land” Project, Alesworth turned to using actual carpets as his working surface. He described them as “carpet Interventions” (Murtaza, 2017) and even suggested that the use of the carpet might have had something to do with an interest that was kindled in him as a child when he grew up playing on a large Kashan carpet in the dining room of his home. His interest in its iconography was tied to an interest in science and helped spur his imagination so that the carpet became a metaphor for his understanding of the post-colonial identity. (Murtaza, 2017)

“Garden Palimpsest” consists of a 130-year old original Kerman carpet on the floor that has been embroidered upon with Jean Delagrife’s plan of Versailles estate from 1746. Arabesques and floral motifs are interspersed with and stitched over with dyed wool embroidery forming text, labels and markings of where gardens and rivers will run. An old tattered carpet has been brought to life to talk about the changes wrought upon cultures by colonization, the significance of layered histories and the complex formation of identity. The charbagh of the east becomes a site of dialogue where there is intermingling with the history of Europe, even its fates seem intertwined now.

Other variations of his ideations with a carpet as his palimpsest led to works such as “The Hyde Park, Kashan, 1862” also included in “The Gardens of Babel” exhibition, British Indian Viceroy’s Flag, 1885 (2012) where a British Flag was printed on the carpet, “The Cantt. Runner, 1893”(2012) featuring a stitched map of the new Lahore Cantonment on an old carpet, “United Kingdoms” (2014) featuring a colourful map of the British Isles on the same surface, “Gwadar the Chinese Periodic Table 1926” featuring an old periodic table in Chinese stitched onto a Baloch kilim referencing the exploitation and takeover of Balochistan for raw materials, Lawrence Gardens (Bagh- e-Jinnah) 2014) featuring a map of Lawrence Gardens, Lahore on an antique Kashan carpet. His works also led to a nomination for the prestigious Jameel Prize.

Other works that are deeply embedded in the natural world, research and garden histories include “Trees of Pakistan” where Alesworth has commissioned a miniature painter to make a visual taxonomy of trees in Lahore. The practice mimics that of British colonizers who commissioned Company School painters to make ethnographic studies of local people and practices so that they were seen as “types”. However the result of Alesworth’s act is both humorous and intriguing where unique observations, oddities and eccentricities of our lived urban environment which normally go unnoticed are revealed. Each painting is meticulously labeled as would a botanist archiving his finds if he had just discovered a plant or tree species.

In 2014 Alesworth returned to art projects in the public space after a long hiatus. Revisiting his curiosity about science and art, he set up a site of encounters and dialogues titled “The Age of Wonder”(2014) at The Lahore Literature Festival where he invited members of the public to view everyday objects through the microscope and as magnified projections on a wall.

For Alesworth the everyday is as fascinating and revelatory as scientific discoveries and grand historical narratives-they reveal layers ripe for excavation.

One Response to THE BAZAAR, ARCHIVE AND THE CURIOUS ARTIST