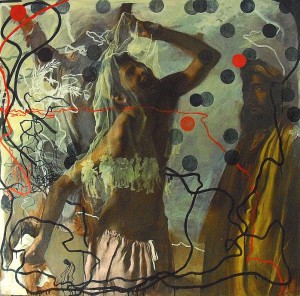 The Artist, the Art Work and the Perception

by Raania A. K Durrani

“Psychological Space,” at the IVS gallery in Karachi, showcases not only the personal journey and capacity of each artist, but also represents young Pakistani art and the diversity of the schools of thought present today. The eight artists featured have trained at Pakistan’s most significant institutions, National College of Art, Karachi University, Beacon house School of Visual Art and the Indus Valley School of Art and Architecture. In the gallery, the viewer sees a fresh and promising collection of expression and technique.

The artists, in their brief, pose questions and reveal the context of the show as, ‘How do we deal with the constant return to those thoughts which invade our minds? How do we deal with the strange working of our brains? How do we escape? We take the only predetermined measure, available to us. In other words, we make lots of art, with all its colors, and forms or the lack of it, the repetition of nervous breakdowns, or the stillness of time. We immerse ourselves into the psychological, the emotional. And inside we will find all those things which make us naked, vulnerable, man, woman, young, old, and at times, visceral, almost like an untamed youth. As one begins to dissect these thoughts, one begins to see that we are not just one thing. We are actually a composition of our pleasant and horrid experiences. It was in fact an exaggeration of our feelings. Once out, we experience what is commonly known as catharsis.  This is when we truly begin to interpret and reinterpret the visual, which was a mere thought, which transforms into an opinion, which then further transforms into a complete work of art. As a consequence, we have now created a dialogue.’

This realization of having created a dialogue hence pushes the art further and creates avenues for deeper investigation, questions and responses. Salman Toor’s work stands out demanding just that. His painting questions personal experiences, memories, and cultural dilemmas and push the viewer to come forth and think. Toor’s mark is alive and his strokes breathe whilst his work brought flesh and volume to the show.

Toor has dedicated himself to the figure and his style is best described in his statement as ‘the Italian Renaissance meets seamlessly with graphic painting for local cinema billboards, these pictures are not a literal amalgam of their commercial sources; they look like museum-worthy pieces. They convince us that the impulse to paint vivid images and aspire to the skill of the Old Masters of pre-modern Western Art is not only a feasible one but also a contemporary one. The spiritual light with which Toor paints ordinary merchandise and bodies in an age of exhausted irony and an innumerable image bank restores feeling to them.’

In complete contrast to his style is the work of Hina Farooqui. Though she speaks of several issues like personal struggle, weight loss, alienation and the need to restore balance, her work is focused. Hina Farooqui is on to something and it is most exciting to imagine the work that will result from her current creations and developments. Her art appears naïve and young, playful and personal, and at the same time it is very direct and refreshing, unlike a lot of heavy and overly conceptualized contemporary art.

Sana Obaid’s ‘Epiphany’ is described as a result of personal struggle, she says, ‘My work is the outcome /revelation of all what I have gone through or going through, my surface can be seen as my mind where so much is going on, where a lot happening same as in my mind all the time but I see the final art works as the Epiphany.’ For a work titled ‘Epiphany’ the words attached to it are inarticulate and vague, and leave the viewer thinking about the real reasons for making this work. It seems that Sana’s art is purely material driven, in her creations she is celebrating and enjoying every piece of double-sided tape, which she has used to create the semi-sculptural work of art. Most of the time art is best delivered honestly, and simplicity is a psychological space in itself.

Another honest and playful document of experience is Farooq Mustafa’s work, he says “This body of work is part of the series “Ambiguous Journey” based on my experience of becoming familiar with a foreign environment during the course of my stay in Japan. The fluidity and freeness of my work helps to express my perception of my surroundings, which define our comfort zones and aid in the adaptation to an unknown place.” The drawings are crowded memoirs of visual joy, yet the fact that a ‘gaijin’ has drawn his memories of Japan, almost as if Japanese himself brings humour and lightheartedness to the work. Nonetheless coming across joyous work in a gallery setting is a rarity these days.

There were other works, some technically superior than the ones mentioned above, some a bit more clever, some simply created to stun the viewer – the show as a whole worked on most levels. It could have been hung differently, and that would have added to the strength of the display. Psychological Space represented the strength and diversity in young Pakistani art. It addressed questions posed by artists – yet it was quite apparent that most of the work displayed was being made to fit the conceptual criteria of the show, rather than standing for itself.