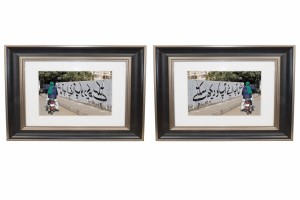 The Art of Painting: Fatima Munir

The Art of Painting, also known as The Allegory of Painting was painted by Dutch painter Johannes Vermeer in the 17th century. The painting depicts the artist painting his subject. His subject is dressed as Clio, the muse of history, who inflames the desire to record and to give an account of events that are happening or have happened. Fittingly, Clio was shown with an open scroll, which in more modern representations might be replaced by a bound book, on which she is recording information for a succeeding generation or from which she is reading information from a previous generation. Ancient writers appealed to Clio when they began their work. The Muse gave the necessary inspiration to their creativity.

So, one’s first s postulation to an exhibition titled “The Art of Painting” is that one would be received by paintings on entering the gallery. However, that was just the bait that Fatima Munir uses for her exhibition at the Taseer Art Gallery showcasing her series Modern Day Landscapes. What follows is a series of photographs. But, this is not exclusively photography exhibition either, because the artist does not intend to demonstrate her ability to photograph, she employs it as a means to document an interactive art activity, or perhaps the word performance befits the activity better as it encompasses all the components of a traditional performance, the stage, script, director, actor and the audience.

Munir’s role is seemly that of a director and documenter of the performance. The stage is set outside the famous Bilawal House. A place that most Karachites look upon as the epitome of encroachment, not just of space but even freedom. The man in the photograph is her actor, who executes her script. His role, as an agent, as a form of Clio from Vermeer’s painting is crucial to this setting. He offers a kind of dialect to the whole dialogue not only in terms of prose but also in terms of phraseology. However, interestingly, this character does not have a face.

Her work Jhandiyan, which was also a part of her thesis project in 2012 is perhaps the most poignant work in the whole series. The reason could perhaps be the ambiguity and layers in the work. Should one decide to look at the work left to right, the flowers seem to slowly bud and eventually come into full bloom towards the end. However, viewed from right to left the flowers recede leading to eventually barrenness. The growth of the flowers is in contradiction to the politically correct left wing versus right wing debate. It challenges the very notion of political correctness because it subverts the organic change society is constantly engaged in.

Over all, the series is an extension of her thesis work which negotiated with issues of life in Karachi by amalgamating blinds and text. Another piece which reads Aaj main, kul tum embodies the palpable insecurities of life in Karachi and its many manifestations in one’s person life. This is a phrase that occurs in every Karachites mind every once in a while.

However, in comparison to the maturity and intricate understanding that Jhandiyan engages in lacks in some of the works. Such as the two landscapes which read Kash aap apnay aap ko daikh suktay. When one compares the two one cannot ignore how the molvis presence takes the dialogue on a different tangent, a more liberal verses non-liberal squabble. Though the artist admits that his presence in the photograph was sheer coincidence, however, the presence of the photograph in the form of a mirroring diptych is after all deliberated choice. The tension between the artist and her audience is evident. The very political correctness, or definition of correctness that is challenged by the artist in the former is contradicted and makes crass judgments in the latter. Instead of ridiculing or outright confronting people whose ideas often offend one, a more contemplative route makes the sharing of perspective is possible.
By taking an art activity into the street and by bringing the street protests into a more formal environment such as that of the gallery does instigate a dialogue and gives the work a trajectory. The interesting thing about this work is that it has two different kinds of audiences. One which witnessed the performance on the street amongst the happenings of the city and the others who are being shown its documentation over a cup of tea and chicken patties. But none the less, hungami halat main hum sub sath hain.

Madiha Sikander is a visual artist and writer based in Lahore.