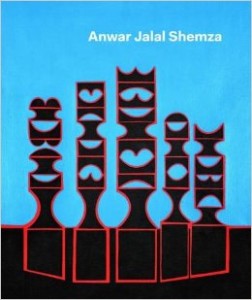 THE ABC OF ART

Like god – who can be found near your heart no matter if you search for him in distant lands and different books – the link of an artist’s work can be traced to some of the most unusual and unexpected areas. For instance, a person who went to look at Shemza’s works at Zahoor ul Akhlaq Gallery, NCA, Lahore, during the Lahore Literary Festival this February and later attended the launch of his monograph, was surprised to see the similarity between the works of this early modernist of Pakistan and the structure of windows of a building from the fifties in Lahore. Intriguingly, cubes, circles and straight lines, which recurred in the paintings of Anwar Jalal Shemza were repeated in the architecture, art and popular visual practices of that period.

In this monograph published by Riding House and edited by Iftikhar Dadi, one can have the rare opportunity to know the mind and work of an artist who was part of a significant generation of artists, usually referred as the ‘Lahore Art Circle’. In the monograph one finds the reproduction of an invitation card of the group’s exhibition at the Divisional Auditorium next to Lahore Central Museum on 14th December 1955, which includes the names of Mariam Shah, Razzia Feroz, Ali Imam, S. Safdar, A.J. Shemza and Moyene Najmi. It’s interesting that the image that accompanies the information on the card is of the ‘Dancing Girl’ of Mohenjo-Daro, since on the one hand the works of these painters can be connected to the domain of mainstream modernism, yet these also betray the traces of past.

In the art of Anwar Jalal Shemza that past is vividly present in the form of his contemporary concerns, mainly the experience of displacement. Displacement removed him from his land of origin, but could not take his language away. But long before Shemza’s shift to the UK, one comes across his involvement with language. His contribution in writing is crucial to comprehend his relation to creativity. The text assumes an importance in his art, because he is amongst those rare painters of Pakistan who were known as literary figures as well as the maker of images. His novels, including Qissa Kahani and Akaila Admai are a few from the oeuvre that maintains the link of a visual artist to the world of words.

In one sense language is a unique experience or tool in the hand of an immigrant, because on the one level it reminds him of his origin but at the same instance it compels him to translate and transform it for others. Looking at the work of Anwar Jalal Shemza reproduced in the monograph one realizes how the artist trespassed between readability and recognisability of a text. In fact, living in the UK, the presence of Urdu text was a means to connect, associate and identify with his roots, as was evident in the Root Series printed from page 136 to page 147. However what Shemza created before his London phase was also linked to the tradition of writing, but taken to the stage of abstraction and formalism in his art. As Iftikhar Dadi adds in his insightful essay on this phase of the artist: “Structurally, these works often delineate an imagined plant on the upper half of the picture, while the lower half depicts roots…. These works relays the anguish of diasporic experience in a formally restrained language based on calligraphy and ornamental designs inspired by ornamental carpets and textiles”.

The monograph offers some other important texts on Shemza, such as by Rachel Garfield, Courtney J. Martin, Shezad Dawood and others. In his personal treatise on the life and work of Shemza, Dawood draws links and connections between the art of writing and the writing: “This excavation into meaning would also turn to Letterism, collage and relief, and through a singular probing movement between them that contexts their limits, often through perverse combination of all three, where the form of a letter is taken out of itself and returned, transformed…”

Probably the forms of letters were the most crucial visual material for an artist, who spent his last years away from his country of origin and his language. Being a writer of fiction, language was a tool to explore and a means to recognize his abandoned home within himself. The circle seems to be coming to its conclusion in the monograph with useful texts to understand the work of an artist, who pursued his formal, visual and pictorial concern in the realm of words and beyond.

One Response to THE ABC OF ART