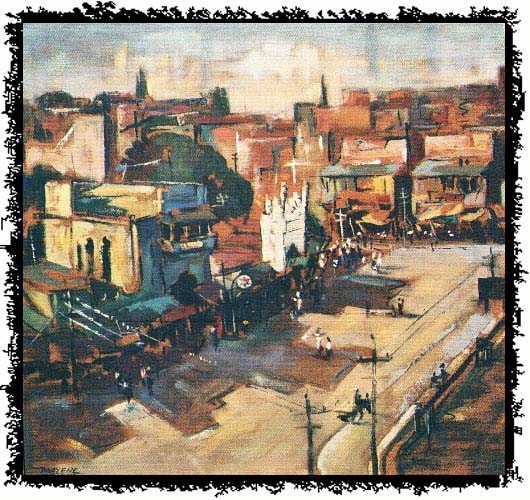 The intellectual tea houses of post partition time were frequented by a number of creative souls who sat together and exchanged ideas with each other giving birth to a generation. It was that generation who favored modernity and progressiveness and took part in laying the foundation of modernism in Pakistani arts and culture. We write and rewrite about them and try looking for a new thread to link ourselves to our past and find something substantial to continue with our future.

Freedom is an entity cherished by every creative soul as it’s the heart of his creativity. After partition there is a change in approach towards art making in Pakistan. The air of freedom, the breadth of fresh was felt by artists too. There were many who in the midst of chaos were struggling with their ideas and approaches. Ms Anna Molka Ahmed who is the pioneer of fine arts in Pakistan after it independence in 1947’s and the one who established the fine arts department of Punjab University constantly expressed her concern (in her mid-1950’s art writings) with issues faced by ‘the young artists of the new republic’ and ‘this unfortunate situation’ according to her ‘has arisen because of the lack of the real understanding of our own traditions and the aims of the modern movement’. Then Shakir Ali arrived in Lahore in 1960’s and provided some sort of an umbrella to those who were swimming against the tide. He stressed upon the idea of using art as a tool to emancipate one’s self thus encouraging experimentation.

The young lot that flourished under his captaincy is often referred as ‘Panj Piyaray’. This profile is about Moyene Najmi, one of the 5 devoted spirits, beloved of the guru. He joined Shakir Sb in his post partition modern art journey where the stress was to respond to ones’s feelings than to simply follow tradition. Shakir Sb himself was profoundly impressed by Cezanne and an extension of his ideas called cubism.

The fourth piyara, Moeen Najmi was a painter but is more popular for his occupation of teaching at one of Lahore’s well known institute Atchison College. It seems that his life started as an ambitious artist who is participating in exhibitions held by Shimla’s Fine arts society (a center of elite art aficionada during 1930’s) along with Amrita Sher Gill and Jamini Roy but as soon as his professional life expedited he got involved in freelance commercial work, working on press layouts, cinema slides and advertisements of various sort. Resources say he came from a well-off family. What was his quest? Surely it had been more than just earning a livelihood! It could probably be because of his interest in design or exposure to design work that have had added all that abstraction he explored later under Shakir Sb’s patronage!

He is known as a founding member of Lahore art Circle, now lost in the tides of time and ran his own studio which got closed twice. he couldn’t paint as frequently as a practicing artist needed to be or needs to however the time spend with Ali Imam, Shemza, Sheikh Safdar, Mariam Habib, Razia Feroz made him didn’t stop painting. Anna Molka Ahmed was spearheading the regular group shows sensing the need to provide a platform to young artist to continue and develop the practice of young artists, Najmi had been a consistent participant once won University shield for men 1954.

His paternal grandfather Chaudry Ghulam Rasool, provided a huge patronage to a variety of religious causes and had his fair share building the original Data Darbar mosque. Najmi was a patron of art happenings. He had always been an active organizer of various artistic activities and milieu of events even during his teaching span and had ventures like child art exhibitions.

His initial work is work of a painter who is impressed by brush work and finding a lot of inspiration in nature painting landscapes and city views…but as we look through his later work one comes across with mindset of a modernist. Najmi started looking at the similar subject matter with a different eye. He makes us see many ways of looking at the metropolis of Lahore.

Najmi was good friends with Ali Imam, one of the close companion of Shakir Ali. Imam’s company brought a lot of kinship in his work though Imam did induce figures too! However as Najmi grouped up with other like-minded people in 50’s he induced another aspect to his imagery and that was the use of abstraction. An artist who initially speaking a simple language through plein air landscapes, gradually converted to a modern diction using rural Punjab and Shalimar garden as one of his subjects. His subject remained the same yet his method of painting changed.

But was he truly interested in Muslim cultural and artistic values of the sub-continent! The presence of Muslim architectural features and ornamental elements in his work do confirm this inclination however why then did he choose a nonconformist way of exploring them! Or had he been in surge of relocating the local and looking for some sort of a redefinition of the information at hand! It appears that the artist who belongs to the east yet is aware of the west is trying be making a conscious decision of not letting any one of them to go and decides to juxtapose the two at some point with harmony. Shalimar Gardens which is in the collection of Lahore Museum is a fine example of that. Just how Van Gogh conveys what he feels more than what he sees in his iconic Starry Night, Najmi while rekindling the spirit of Gogh communicates the ‘sense’ of a subject matter than its mere reality which his eye receives. His significant work Shalimar Gardens is a demonstration how a landscape can be used as a perfect tool by any artist whose quest is to convey the content than just the forms.

With a hint of aboriginality his imagery has some kind of naivety. Inclusion of natural elements for example impression of a leaf form, in fact using a method of taking an impression is an attempt to be as close to the truth as possible. Meanwhile he takes a lot of support from his imagination and does not simply rely on his eyes. This contrast of staying close to the reality yet being away from reality in the form of abstracted image makes his work more mysterious and offers a lot to ponder.

The contrast lies in another way too. The modern appearance of his visuals which are built with the local vocabulary include inner city buildings, Jharokas and multifoil arches. Then what is that makes his imagery modern? It is definitely not the vocabulary nor the color palette but the way all the elements are put together and rendered on a two dimensional surface. Abstraction has been present in the prehistoric art and in the art of the primitive, though unconsciously yet it already exists. Careful study of abstracted phenomena have helped Najmi to achieve a more meaningful result when he decides to do it with all his intentions. Cubists had a mission which was to eliminate the third dimension. Najmi in Shalimar Gardens seems to be experimented with that too by using a viewpoint giving the whole a sense of space which is customary of traditional miniature painting. Najmi tries to synchronize with the modern spirit of his time by juxtaposing the two different tangents. The traditional objects expressed in an abstract manner: using bright colors on a canvas charged with brush strokes! Traditional elements though are used with some sense of taste and a much of grace. Using recognizable subject matter and painting it in a non-representational way was almost every other modernist’s quest of his times.

His wife recalls his habit of making two similar painting with a different color palette. Does it mean Najmi’s quest was more of a formal nature and less on the theme of linking past with present and tradition with modernity! But then why he did stick more or less to a similar vocabulary in almost all of his works!

People who have shared their memories about Najmi mostly spoke about his gentle nature and selfless being. His students that have become eminent personalities of their respective fields remember him as man of quiet nature. Najmi’s teaching had continued through his the work he has produced as it could provide ample information on form, structure, sensibility of cubism, arbitrary use of color. Moreover how an artist can practiced by going against the tide and develop his own lingo that will be remembered even after almost half a century of its creation.

It is really intriguing for me that in both of his portraits painted by none other than Anna Molka and Colin David, Moyene is posing in a similar fashion not known it was artist’s own decision or were the direction given by the painters!  Gaze fixed in space somewhere, head slightly tilted down, Moyene appears tall even when he is sitting (Anna’s depiction of Moyene) lost in deep thoughts.

It has been a general tradition to speak and write about artists and not the ones who make them. Najmi is not extensively talked about which is probably due to the fact that he didn’t paint that much as the rest of his lot. His wife Attiya in that regard makes an effort to bring him into pages of history and celebrates his life approach and work through a monograph. Najmi seems to be aspiring younger lot during his teaching career first at Murree and then in Lahore at an eminent place the Aitchison College. This will remain a mystery to me that even after starting up a career as a practicing artist and being in the company of significant people, getting involved in extensive artistic activity for example establishing Lahore Art Cirlce, opening up a studio, being on UNESCO fellowship, meeting museum owners and visiting galleries abroad, on his return to his own country he preferred teaching to younger lot than developing the platform and circle for emerging art and artists he once initiated!