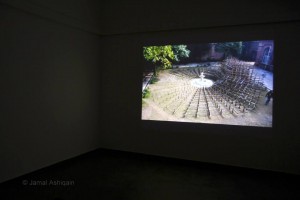 ‘Let’s Take it Outside’ at the Gandhara Art Gallery weaves together works of a diverse group of artists; Imrana Tanveer, Noor Ali Chagani, Ahsan Jamal and Nashmia Haroon. Each of these artists from, emerging to established, work in diverse mediums and approach their work with unique points of view. The curatorial concept of the exhibition is noble – in the words of the curator, the idea for the exhibit ‘plays on the notion of moving the narrative or dialogue away from its present condition i.e. moving it away from the corridors of power and drawing rooms, to a place where it is more relevant and unhindered’. Keeping this powerful concept in mind, the works by the individual artists must be fully considered within this larger curatorial framework to give them context and relevance. The exhibit also benefits from the large space of the gallery, spanning two floors and 42 works, with the ground floor consisting of the work of Imrana Tanveer and Noor Ali Chagani, and the first floor spotlighting the works of Nashmia Haroon and Ahsan Jamal.
The exhibit categorizes each artist separately. Upon entering, the viewer first finds the work of Imrana Tanveer, a rising contributor on the contemporary art landscape of Pakistan, who uses paper and thread in a unique way, a style distinguishes her work from others. Her work in the exhibition is politically and conceptually charged. The visitor is struck by the Glory Freezes Like A Shadow, a series of work in which each piece deals with a different year in Pakistan’s political history. Images of Nawaz Sharif, an empty chair, Zia ul Haq and others bring popular culture and easily accessible and readable images to an art-lover audience in a new way. This work was first shown at Drawing Room Gallery and only 16 pieces from the original are on display, and one wishes that the viewer would be able to see more from the series. Her other works, Our Lady in Saturation, Adoration of a Yellow Duckling and Kiss of Love, also focus on political statements with inspiration from western paintings in the canon. These works are larger, and extremely colorful, overwhelmingly drawing the viewer in and allowing for a process of discovery as one engages with each of them individually and uncovers the layers.

Tanveer’s work is contrasted with Noor Ali Chagani’s three pieces also on the first floor. Noor Ali Chagani, is one of Pakistan’s most well known artists, having won many awards and being shortlisted for many prestigious prizes including the Jameel Prize. The works in the exhibition, The Otherside, Aik Do Jay Day Naal, and Silence, are representative of his oeuvre which focuses on the use of bricks and blocks to create grid like conceptual works that discuss the role of Islamic art in the world today. Chagani’s work continues to be strong – The Otherside, for example, showcases concrete blocks that give a worn look, a possible statement on decay and dereliction in society, and maybe even a commentary of our nostalgia for the so called ‘antique’ in architecture. The precise strength of Chagani’s work depends on it being widely interpretative according to each viewer. In this sense, the fact that he only has three works compared to Tanveer’s 19 is a bit off-putting, as her work threatens to overwhelm his in the space. It might have been curatorially sounder to have more balance in the exhibition for the viewer to engage with these two strong artists more at length.

The viewer then goes up to the second floor, where one is able to interact with the works of Ahsan Jamal and Nashmia Haroon. Ahsan Jamal’s work is yet another take on the neo-miniature tradition, small and detailed. The two series titled Entitled and Picturesque, respectively focus on serene landscapes and portraits. The execution of the work is excellent showing a heightened sense of craft, but the viewer is left to feel more wanting. One feels that this is something one has seen before, and the viewer wants more.
Nashmia Haroon’s work on the other hand is much more ambitious. She states that “Lahore being her city, I am attempting to preserve my city’s existence today while its physical appearance is constantly changing”. The exhibition consists of photographs and a video of her project that aims to create a temporary structure in scaffolding’ at the NCA, as part of her larger engagement with city spaces, urban development and postcolonial urban sprawl. Scaffolding and such structures are ubiquitous in cities across Pakistan, and she explains that “while their purpose is to support, here the support is the obstruction, which reminds the viewer acknowledge the lack of basic planning”. Through her work she tries to call attention to city planning, and complicate the notion of development as progress. Her choice of this project at the NCA must be lauded, due to its historical significance, adding new meaning to the work. However, the viewer wishes that the artist had recreated this project at the Gandhara Art Space itself, whether within the gallery or just outside. The work loses its full impact in the photographs, and the video only compensates somewhat.
It is with this failure of Haroon’s concept to be powerfully accessible to the viewer that one must engage and complicate the curatorial concept of the exhibition. The curator Sivim Naqvi aims to take the work beyond the power houses from the gaze of an exclusive audience, to a more mass crowd. Is she then arguing that the gallery is a completely accessible public space with less authority or power to shape the art structure compared to the drawing room? What are these ‘corridors of power’ that she terms? Is the gallery not one of them? This flawed idea actually contributes to the failure of her curatorial premise. Many so called interventionary art ‘happenings’ focus on bringing art towards a more overtly public space. Her selection of artists also does not make sense, as not all are overtly dealing with concepts of public space – the most likely are Chagani and Nashmia Haroon, but then they are not well represented in the exhibition — Chagani has a handful of works, and Nashmia’s is only accessible through photographs. The artists, except for Nashmia are not engaging with any public spaces, rather, many of them have made their work within the institutionalized gallery and academic sphere as well. While many of the artists are individually strong, the viewer feels that more could have been done to make the exhibit more powerful. The Gandhara art space has already broken new ground in Pakistan by doing longer, three month exhibitions, and utilizing a large space, it must now go a step further and push and experiment with curatorial concepts and boundaries in order to bring new and exciting shows to a rapidly art maturing Pakistani audience.