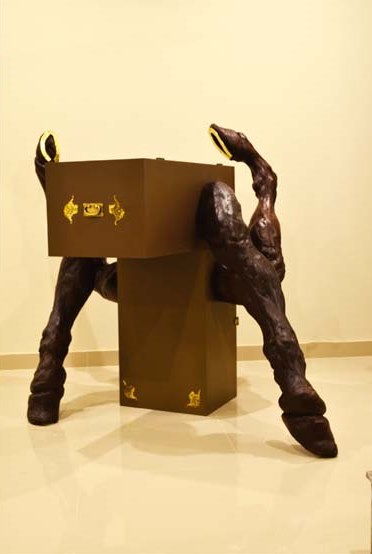 Hybrid inspirations. Are all sources of inspiration an amalgamation of numerous stimuli or do we consciously pick and choose from a palette that we’ve

Hybrid inspirations. Are all sources of inspiration an amalgamation of numerous stimuli or do we consciously pick and choose from a palette that we’ve primed? Regardless of whether this happens the case is not as much as an either/or one but rather a how/why one. And that is precisely what Sanat’s latest exhibit titled Tableau Vivant addresses. The show features works by Usman Khalid and Jibran Shahid and struck up conversations with their pieces through various inspirations.
Usman Khalid works borders on parallel worlds and the ‘other’ side of consciousness. Often through his pieces we see a visual exploration of the invisible reality, lyrical outbursts and fleeting thoughts. For instance in his piece In The Truth of Things, we see how the mistiness of the scene makes it impossible to see the natural extension of the space into the outside world. Executed with charcoal, pastel and pen on paper there is a distortion of reality that is as fragile as a whisper. The natural pose and substantial hues of the figure also acts as a defiance between the viewer and the piece.
Another piece entitled Talk To Me executed with charcoal on paper shoes the figure standing with her back to the viewer. Another act of defiance by the artist in depicting the subject and rendering a space that is on the eerie sense of very real and very unreal. In one part of his statement Khalid mentions, “The being of bodies in a particular space fascinates me. It opens my mind up to a world I know very little of. Hence, I feel a strong force within me that pushes me to look beyond what the normal eye sees or something that truly frightens me.” In its totality this statement completely encompasses the works by Khalid and the feelings they strike up for the viewer.
Jibran Shahid explores Renaissance styles through, as he says, “changing cultural perspectives, artistic styles and symbolic interpretations that hound the subject of ‘man versus animal’”. He goes on to talk about the horse the primary subject in his pieces, “While toying with the idea that the horse is an icon of civilization, befriended and exploited by man, I began to develop a hybrid being.” And all of his pieces are a representation of this journey.
His works on the present set of paintings and sculptures, Shahid finds a wealth of symbolism, ranging from heraldry to architectural decoration, book enlightenment and of course painting and sculpture. His horses are a symbol of taboo hybrids that we dare not utter. He, nevertheless, executes each piece in all its splendor and unflinching brilliance. The oil on paper painting Emergence is a direct example of this brilliance and hybridity. The message is to be experienced rather than understood.
Shahid’s works insisted on your attention, one such example is The Blind Race. This acrylic on canvas piece is the epitome of his efforts to point out man’s equivocal relationship to this magnificent and splendid icon. Shahid’s works are free from references, they are supported by his inspirations and abstract thoughts. The figures’ strong angles are a composition that show his basic interest in proportions of horse and man. The rest of the story is then built up through the flickers of his mind.
Both artists displayed a show that stimulates thought and expression. Each promises a vivid memory to be left imprinted on those who see them, an involuntary action as the theme of the exhibit depended on, as I would like to say; ephemeral inspirations and captured imaginations.