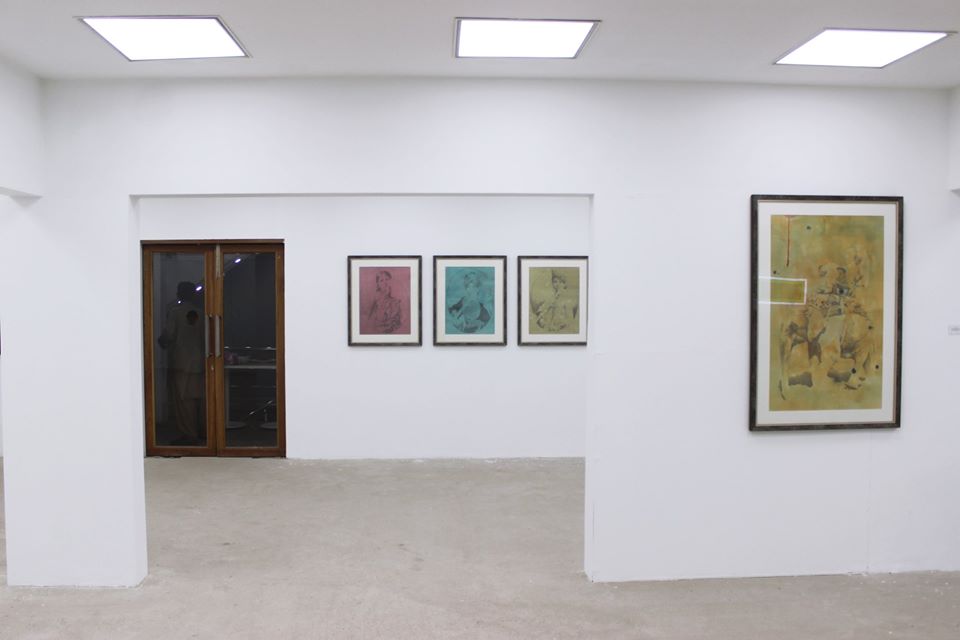 Water and Colour
Utopia
Cans of Soup and Soda

Have you ever pondered upon the extent of reality that exists in the phrase ‘history repeats itself’ and how much truth these three words hold? We like to believe that, with time, we progress, grow, make headway, learn from our mistakes and promise to never replicate them. Nevertheless, deep down under denial and false hope, we know that we follow in the footsteps of our ancestors and redo everything they did wrong.

The collaborative works of Asif Ahmed and Syed Faraz Ali, in their exhibition ‘and those who were seen dancing….’, displayed at Sanat Gallery, portray humanity accurately, as they take us on a trip, with the historical times of the subcontinent being the start of the journey and the current political situation of Pakistan as the last stop. Ahmed states, “I consider this exhibition as a parallel drawn between two time periods of the same land; the history and present. My conventional visual language stands in contrast to Faraz’s modern approach, which is delivered by the use of different mediums and images.”

To this day we recall the dark times, faced by our people of the subcontinent in the 1900’s, with a heavy heart. We braved through years of torment, torture and injustice, under British rule, with courage. After consistently fighting back with the greatest weapon – hope, hope for a land of our own, hope for moral and righteous rulers under whom we could have freedom and equal rights – we won. It is ironic how we called it Pakistan, the land of the pure, when the land has everything but purity.

Using watercolour and tea washes, Ahmed recreates old photographs from the Mughal time period to relive the agony and pain that the empire suffered. He uses online archives and history books to choose a set of photographs that he feels ‘convey the dominancy practiced by the British Empire and the collapse of the Mughal era’ best. The beautifully painted browns give a rusted impression to the worn-out vintage photographs and the faded gray figures drawn atop the soft watercolour base appear to be gradually dissolving and disappearing into the bland and flat backgrounds. His ‘Khidmatgaar’ and ‘Noble Portrait’ series comprise of meticulous and detailed drawings of servants and noble leaders. He says, “the Indian servants serving the British Empire on their colonized land are the ones who had been the powerful owners of the crown themselves. The noble characters and servants cannot be put on two different ends because they both come together to form one whole story.”

Art is a suitable platform to raise awareness and communicate with the audience. While Ahmed uses it to spread knowledge of the past, putting forward an unbiased and neutral historical depiction, Faraz takes it a step further and presents his brutally honest and negative opinion about the state of law and order in our country during present times. Taking on a straightforward and transparent approach, Faraz makes a mockery of our current politicians, by replacing their faces with cartoon characters from Walt Disney. His installations placed on white walls could not have been more explicitly obvious. He states, “these cartoons have been entertaining us for centuries the same way as our politicians who have been entertaining the nation for the last 70 years.”

Polymer resin is a material that is commonly used to make toys and it is also the medium which Faraz uses, in his work, to make molds of cartoon characters that represent our politicians. This hints at how our leaders lack real substance, and the system of law to them is nothing but a pastime and a means of amusement. He comments, “the polymer resin caries human qualities, as when its liquid form is hardened, it reacts to the changes in situation, just like when we react to our changes of living states.”

Whether politicians would be able to give our country stability and honour or whether they are merely an eye candy and are elected to sit and look pretty, is a debate that he proposes in his work ‘Trophy (or Toffee?)’. Taking this concept forward, in another work ‘Qeema’, he makes a statement that anything when sugar-coated could become likable and appealing. Treacherous people dressed in fancy suits manifest as honest politicians but when they are stripped off their multitudinous layers of pretense, traces of deception and sham are uncovered. He uses the character of Mickey Mouse to represent this by building the cartoon’s face with numerous rats, the idea being that Mickey Mouse, though a make-believe character of happiness, is merely just a mouse.

“My artwork is based on political issues because I worry for our country. As far as the world is concerned, I’m not interested in their law and order system but it does concern me when outsiders play a role in matters related to Pakistan,” says Faraz.

The eye-opening and uncensored works of Faraz, speaking of corrupted politicians making an absolute wreck of our country, together with Ahmed’s reproduction of misery and sadness faced in the past, create an enlightening picture, one that hits us with reality in its truest form. We can all agree that we have suffered enough and it is about time that this came to an end but alas, there is no stop to this since history is known to repeat itself.

Loading...
Newer Post
Home is Anywhere and Nowhere!
Older Post
Transplanted Artists and Cities of Adaptation Berlin, its Global Spectrum of International Art and Artists and the Question of Identity