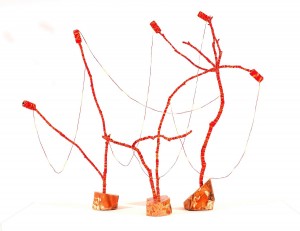 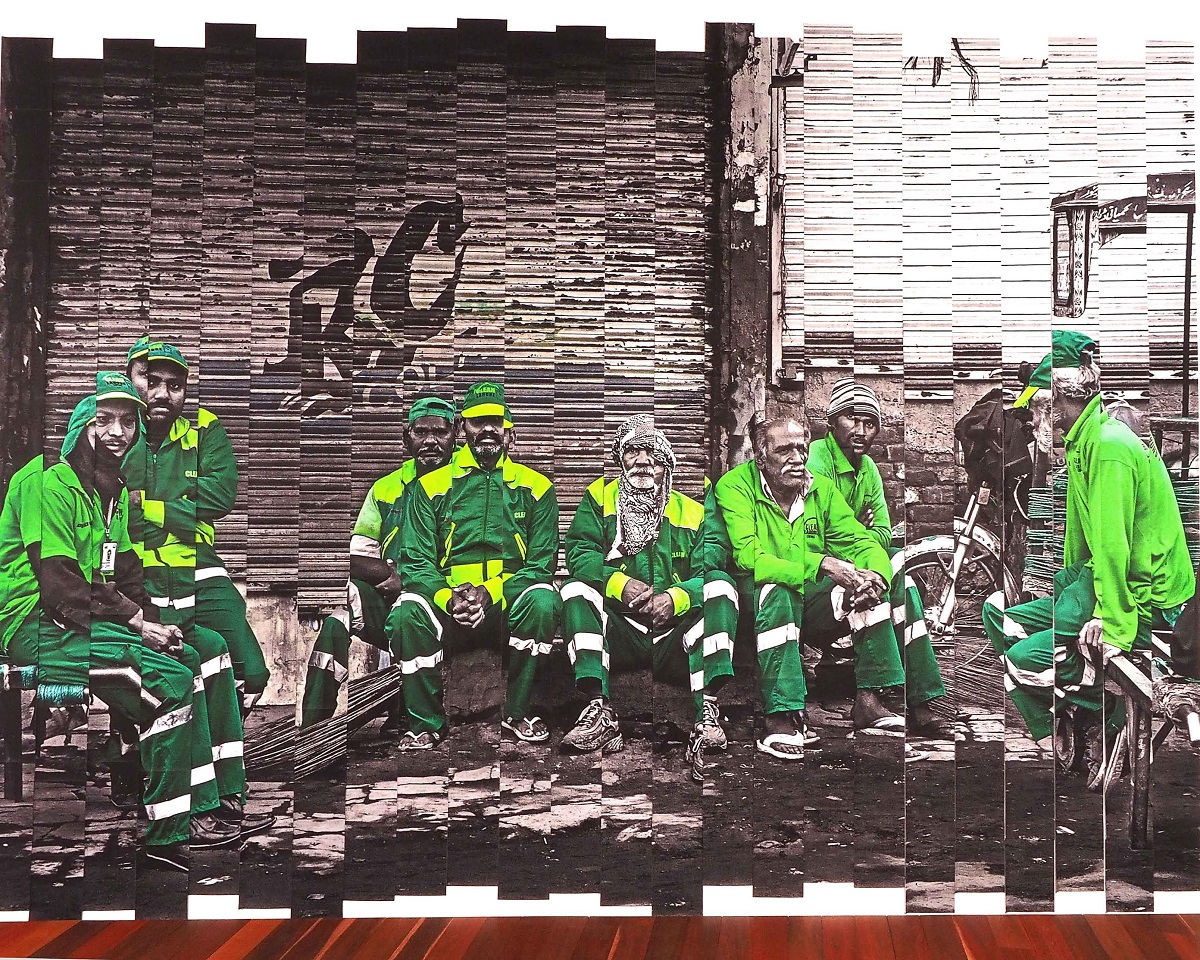 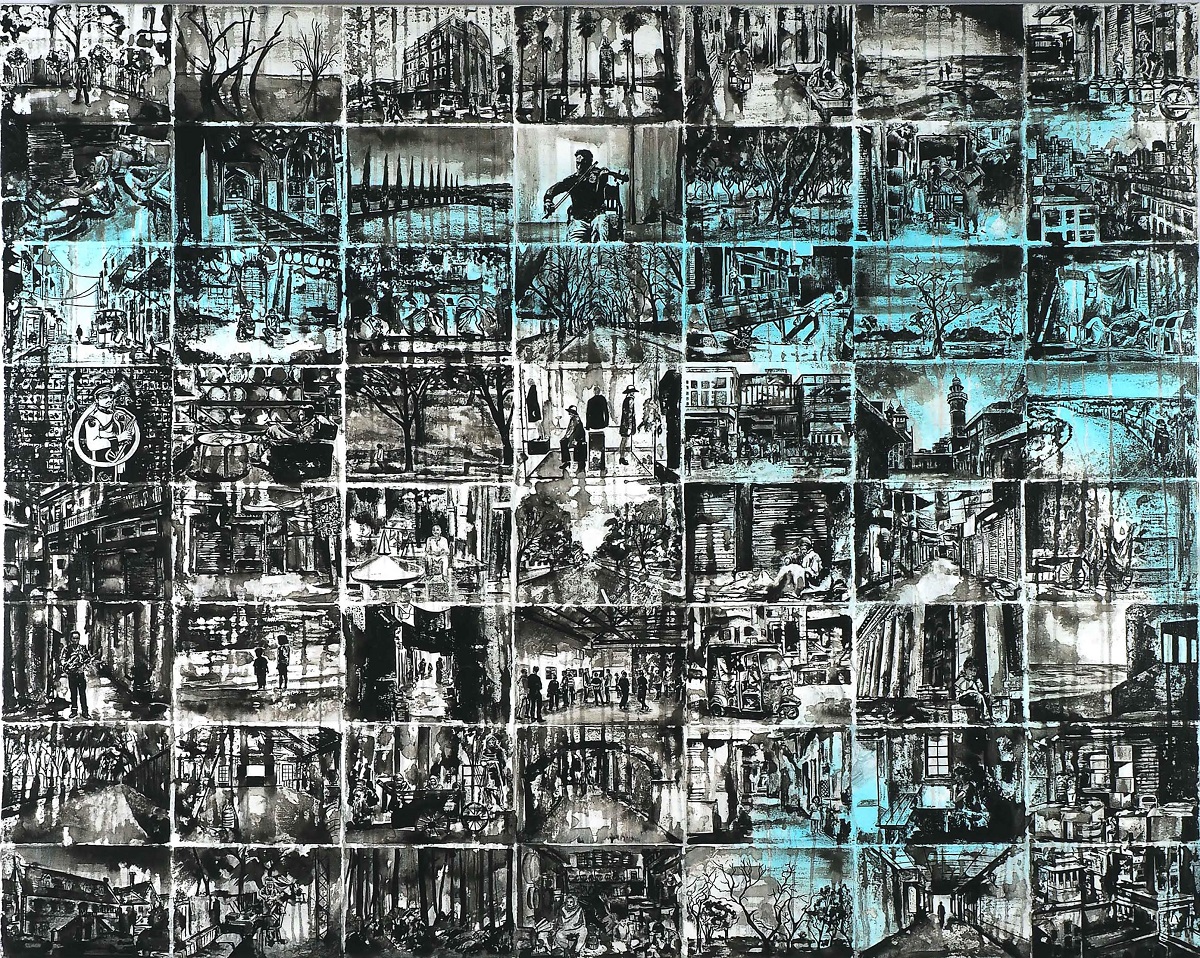 by Dr Chloe A. Gill-Khan

‘Jaali’ takes the viewer on a journey of his own position as a spectator in the artistic space and in everyday life, unsettling the politics and ethics of the gaze. Nazia Ejaz’s work explores the complexities of how we look at others through multiple mediums, textures and effects. As one enters the gallery, a life size photographic image, Do You See Me? decorates the far left wall, which casts a presence even as one walks around the space. The image is of a group of street cleaners in Lahore who appear to be taking a break, which the artist has photographed, cut into pieces and installed in a way where one can see slippages in the grid patterns. The cleaners, in their bright green uniforms, all respond to the camera in different ways. Each gaze tells a story, and ultimately, asks us what we see when our paths cross the same place – in the streets of Lahore and in an artistic space in Adelaide. The emphasis in this piece is on the humans – the cleaners – at the centre of the image – and on the great divide that separates the photographer and the viewer in an art gallery from them. The photograph shatters political, social and cultural frontiers, inviting us to question the invisible spatial barricades that we lock ourselves in that disorient – much like the slippages in the image – how we view a space that we are all a part of.

This theme is also the subject of Walk With Me and Here and There, two paintings, each split into grids comprised of ink and oil paint drawings on linen,from photographs taken by the artist in Pakistan and Australia. The grids comprise of specific ‘scenes’ from everyday life in Lahore, the artist’s original home and Australia, where she lives now, including cityscapes, landscapes, people trying to make a living – intimate snapshots of a lived experience. There seems to be a deliberate ambiguity with which the scenes have been rendered in Here and There, making it difficult to discern the location of the scene at first glance, highlighting the presumptions we bring to the work as viewers. The everydayness of the scenes from Pakistan and the depiction of people from all walks of life, reclaim places from stories of fear that distance us from the spaces that we are all part of. The spaces are in motion through the acting out of people’s lives that all intersect in the space of the painting. Taken together, the scenes create an impression of a musical score, where the separate yet connected paths of the people share the same space. It is people who are privileged and not mediated stories that often act as our screens of connection to others.

Ideas of space, the gaze, representation, power, belonging, thresholds, presence and absence are examined in multiple ways in conceptual pieces such as Mirror Mirror on the Wall…, a series of three circular mirrors with different grill patterns cut into them with images of rose petals in multiple forms. In one of the mirrors, as well as seeing one’s reflection, the viewer can see the shadows cast on the wall where the mirror hangs and on the wooden floor. The overall effect invites the viewer to reflect upon the politics of representation at a time when depicting others (minorities in Pakistan as well as those in western countries) has lost a sense of ethics, where the surfeit of visual propaganda shapes our responses to the familiar and even renders unfamiliar what we know. This requires that we take new turns, see where we aren’t accustomed to looking and to gaze again at what we take for granted.

On the opposite side to the mirrors stands a breathtaking installation, Jaali II. The piece is composed of hundreds of eucalyptus branches each wrapped in red and yellow cotton thread (mauli) and connected to one another to form a web-like structure. It creates a sense of fragility and of strength, in particular when the breeze interacts with the installation and moves the piece, creating shifting shadows on the wall. The installation embodies the human desire for connection with the spiritual through the material; the red cotton thread evokes its traditional use in wish fulfilment and spiritual affiliation in Sufi shrines, where it is tied to the surface of the jaali or to a devotee’s wrist. The wrapping of the branches in the thread also invites one to think about how the process and the material itself acts as a medium for inviting specific forms of reflection, connection and expression. The unification of the physical (branches) through a meditative process, with the material (mauli) express the metaphysical dimensions of how we connect to our environments, which adds another dimension to the exploration of our connection to space.

Also included in the exhibition is a beautiful fresco of deconstructed pieces of the mirrors, in which the patterns of rose petals connect with the trio of mirrors as well as with the piece Jaali – Screens. This is a large installation of polythene sheets which are draped and overlapped to present an illusion of grandeur.  The polythene sheets have images of grill patterns printed on them, superimposed with images of rose petals. The printing of the rose petals on the plastics displaces our traditional sense of connecting with roses and with plastic. The polythene sheets are like a synthetic shroud that seems to breathe, as it moves due to its lightness. The rose petals add a sense of fragility and their colour a visceral quality to the material. The bringing together of two disparate textures creates a unique visual image, which, in keeping with the metaphors of the exhibition, questions, unsettles, alludes to layers of complexity, but also opens up new ways of thinking, positioning, seeing and being in relation to the other.

A video installation, called Inside, Outside charts the changing interior and exterior landscapes of the Lahore Fort, through the changing position of the sun. The installation begins with an image of a room in the summer palace, overlooking a garden through the traditional lattice structure. As the sun begins to rise, what was once discernable in the exterior space is blinded by light, which at the same illuminates new spaces inside the room. As time progresses, so does light, and the installation ends where it began – the cool still of dusk before dawn. However, it is not the concept of light or space that is privileged. For me, it is the medium of looking. The jaali, screen, that manages what is external (light), and internal (darkness), places the two in an interdependent relationship. Furthermore, it is where we stand that determines what we see. This concept brings together the multiple expressions of the central themes of the exhibition. For it is how and from where we look at other places and people that defines our connection to them, in particular how the powerless and the marginalised are represented. This means that we question not only the images that dominate how we view others but also the mediums that represent them.

The combination of aesthetic and artistic experimentation with multiple materials and the philosophical introspection in this exhibition left me with a feeling of the interconnected in all that we do. The central motif of the jaali embodies constant movement, travel and the changing of our perspectives that ultimately asks: how I see you, defines me.

Dr. Chloe A. Gill-Khan is a Research Fellow at the University of South Australia, Adelaide.