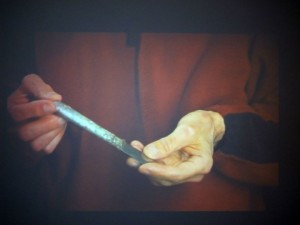 The method through which history is recited and documented trickles a large degree of influence on the receiver’s notion of the past. Whether it be intimate family storytelling or the academic pursuit of reading historical literature, the transmission of past to the present allows our perspective to be solicited. Exploring collective materials of the transmission of history, ‘Tracing the Void’ is an exhibition at the IVS Gallery, which not only shows how multifaceted the gallery space has become but taps into cross-cultural communication through the subject of history. The two artists, Sonya Schönberger and Sajjad Ahmed, have created pieces which are heavy in content and potency yet the treatments of themes are rather on rather opposite poles.

The curator of ‘Tracing the Void’, Hajra Haider Karrar, mentions that the two artists have displayed work which extrapolates from the consequences of war. She notes on that Pakistan’s colonial status has lead the country to absorb much of the after effects from World War I and II and our history inevitably ties in with the British conquests and failures. Sajjad Ahmed responds to the curatorial theme by transforming the gallery space at the Indus Valley School of Art and Architecture into an illusionary corner of a house, eclipsing the formal versatile blankness of a gallery space. Using tile prints, three focal items of furnishing – an antique desk, starch white curtains within an opulent bronze frame and a large flat drawback curtain featuring a print of Raphael’s The School of Athens – Ahmed creates a living space which is reminiscent of a colonial house living space. With optimum control over the display and settings, the artist’s work enquires into the contradictions in our society and the existence of opposing forces. For instance, The School of Athens curtain paints an illusion of evolved, philosophized civilized society, yet behind the curtain a projected grid forms a window and through this screen the viewers can see a snippet of a protest on the streets of a city. Similarly the book on top of the polished desk lures the viewer to pick it up and flip through it, however the book remains glued onto the surface and the pages are blank. The connotations of Ahmed’s work jumble up the viewers’ senses of reality and tangibility; his installation appears to be a space of familiar visuals but it feels cold and distant upon further interaction within the three walls. Sajjad Ahmed comments on the strangeness of creating art specifically to be displayed in a gallery when art is found in the most informal scenarios; for instance, he mentions the aerial view of a garbage site is reminiscent of a Jackson Pollock painting. While managing his own material to build visual connections, Ahmed’s work knocks on the illusions history creates and rewrites; the archaic painting, the gleaming and baroque –yet empty – frame, a frigid blank book are components which suggest education, history and wealth  which transport the past to the future and adjusting our normative outlook of society.

As Ahmed brings an interior space suggestive of human inhabitation to the gallery, Sonya Schoenberger contributes to ‘Tracing the Void’ by bringing her research and anthropological methods excavating the aftermath of war in her homeland, Germany. Schoeberger’s display meanders from a larger research project where she collects narrations from Holocaust and World War II survivors. Schoenberger talks about how she becomes a blank space and absorbs her interviewees stories and rather than projecting or compounding upon their experiences she collects and archives. Her work consists of a projector showing a video of Michael Engelke, a ‘Thing Expert’ consistently examining artifacts and fragments, deciphering their context, utilization and historic importance. This gentle rummaging of scraps, a constant hum of mumbling and the zooming in and out on the pieces enable this projection to have certain documentary facets. However, the simplicity of just one individual drawing conclusions and combing scientific facts to reassess these artifacts has a certain looseness and unfastened creativity which is different from Sajjad Ahmed’s monitored and measured space. The artifacts in questions are collected pieces around rubble piles in Berlin which have been reconstructed to be used as parks and hills for recreational activities. Schoenberger comments that gathering these small fragments was almost like an archaeological excavation project and each item has been photographed and projected in singular frames. The rubble piles are for Schoenberger landmarks which epitomize how Berlin picked itself up immediately after the Wars and constantly devolved their roads and shackled infrastructure. Many Berlin citizens are not aware that these hills are heaped remittances of the war.

The artist comments on how contrary and remarkable it is that even after disastrous historic occasions, countries and people continue to plough on forward. This continuous yet methodological drive to live is reflected in the continuous discussions and commentary of Michael Engelke, which is translated in the handbook that reads continuously with zero paragraphing and minimal punctuation. Schoenberger’s display is simple and uncomplicated, she lets her findings speak for themselves and the viewers feel that here is an artist playing the role of a detective and preserving untold stories and forgotten facts, rather than manipulating or abstracting them to create complex visuals. She has also displayed a picture from an agfa box camera, used during the war, which captures the rawness of the scene and does not provide any avenues for manipulating. The above eye level shot of trees surrounding the rubble hills has an eerie reminiscent dull glow of coniferous tree top branches and it seems like the artist has captured a visual during her excavation trips.

‘Tracing the Void’ is a collective project which reaches beyond the boundaries of contemporary art particularly because the two artists expound on the past and distilled or forgotten narrations. There are undoubtedly endless possibilities of conversations revolving around the artists’ work and the curator’s efforts which facilitate the potential for more shows in Pakistan which continue to question the sanctity of a gallery space.