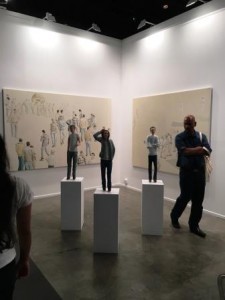 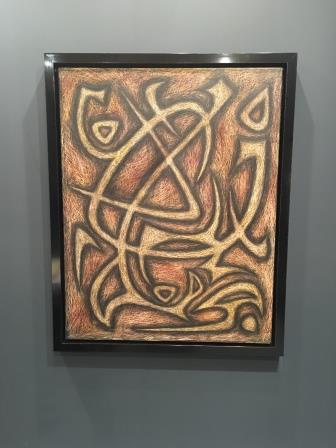 My first trip to Art Dubai was three years ago. I remember telling a friend about it and the response was “Art Dubai? Isn’t that an oxymoron?” Although the wit of the statement stands the test of time, I have to admit that the truth of it no longer applies. In its ten years, the art fair has made an indelible mark on the Middle Eastern and global art scene. Dubai has quite flamboyantly, no surprise there, infused culture into its once vacant landscape. With Qatar and the Emirates leading the Arab race towards cultural dominance, the snobby days of the jabs about the philistine Gulf States are fast coming to an end. I’m afraid the world is changing, the rules are in flux and the dishdasha-clad devil deserves its due.

It is always exhilarating to see strong female artists making strong statements. The first to catch my attention is Lithuanian artist Kristina Alisauskaite. Her lonely laconic paintings have a beautiful melancholy about them. Her masterpiece ‘My darling’ is the quintessential ice queen. The crown is the fortress that hides the impenetrable inner being. Even her tears give nothing away. Where one artist conceals another reveals. Iranian artist Bahareh Navabi uncovers the inner workings of her mind through a process of unconscious self-reflection. She uses layers of tracing paper to create formless forms that serve as a paradox of mental imagery and memory. ‘B.I.U.E.’ is at once human and ethereal, the egoic mind embattled with the divine.

There are moments at art fairs that are pure inspiration. This year it came when I happened upon a stall that instantly took me back home, to my childhood, to Lahore. Risham Syed plays with the past and the present, with a tongue in cheek subtlety that only she can curate. She collects ordinary, everyday images, which are symbolic of the times we live in, and paints them into postcard-sized paintings. Juxtaposing these paintings with objects that are reminiscent of a certain time in history, she gives her paintings a historical context. These tiny knickknacks, placed so naturally on unassuming white shelves, contain a little bit of wonder, a small amount of nostalgia. Even the lighting was somehow dimmer and the space quieter. The soft spoken, always cool and calm Risham Syed, came out loud that day.

The thing about history is that it repeats itself; this is true of art history as well. In the 1950s Robert Rauschenberg coined the term ‘combine’ to describe the art of combining painting and sculpture. This visually delicious, academically avant-garde technique is making quite the comeback. Best illustrated by the work of Syrian born, New York based artist Diana Al-Hadid. Her unique sculptural work, a three dimensional kaleidoscope of polymer gypsum, fiberglass, steel, plaster and aluminum/gold leaf, is breathtakingly beautiful. Rauschenberg once said, “You begin with the possibilities of the material.” Al-Hadid takes this a step further. Her work is about the material; her art is the process.

There are artists who do not want to grapple with meaning and then there are those who cannot escape it. Palestinian artist Jawad Al Malhi’s ‘Measures of Uncertainty’ was the highlight of my extensive two-day walk-through of the two contemporary halls of the fair. All art enthusiasts have an Achilles heel; socially driven art is mine. Al Malhi takes us inside a refugee camp in Jerusalem; this is where he grew up. He began sketching as a teenager and later started painting large-scale works on United Nations aid sacks. He paints to provoke change, by forcing the viewer to see the reality of camp life. Though the subject matter is the chaos of war, the paintings have an ironic, almost eerie, sense of peace. The muted monotones of beige on large canvases juxtaposed with sculptural figures form the perfect balance of chaotic stillness; the uneasy serenity in his work is haunting. It carries the weight of his message.

It may be hard to believe but an academic walk around an art fair can be quite draining. Focusing on every single piece, making mental notes, taking incessant pictures, taking in artists and their life’s work, one runs the risk of coming out mentally, physically (avoid heels at all cost) and emotionally spent. True to form, Dubai has an answer for that as well. All the most coveted global hotspots are now just a Lexus taxi ride away. DIFC (Dubai International Financial Centre) is the social answer to all your problems. Historic Italian eatery Cipriani is the latest in a string of conquests for the UAE’s most cosmopolitan city. Cipriani is symbolic though, it is not just cool, it is classic. Some might argue that Dubai is importing culture one restaurant at a time. However it is not that simple. It is one gallery, one museum and one institution at a time as well. At some point, that begins to add up. And the truth is, ten years later, it has.

Back to business. Recovery via DIFC checked off my list, on the last day of the fair, at the eleventh hour, I decided to brave the mile that separated the main fair from what had been dubbed the ‘morgue,’ Art Dubai Modern. The fact that it is devoted to modern art from the Middle East, Africa and South Asia was my main source of adrenaline. As it turned out, the trek was more than worth it. That last one-hour of wandering through Modern made the fair for me. There is something to be said for history. Especially when it is canvases and paint and sculpture and the stories they tell. And there is no better narrative than that of the masters.

This year I had the distinct pleasure of meeting some of the Middle Eastern greats and one in person. Mounirah Mosly is a pioneer of art from Saudi Arabia. She is one of those artists who are greater than the sum of their art. Like her work, she is complex and beautiful. Mounirah and ‘The Land of Solitudes’ was instant love. From one pioneer to another, Yahia Turki has been described as the father of Tunisian painting and his effortless masterpieces prove why. Turki has taken ordinary scenes and painted them to extraordinary effect. The simple movement, the bold colours, each piece has its own world of charm tucked into gorgeously ornate frames. Frames do not usually come up but these deserve a mention.

From Tunisia we move now to Iran, where Ali Akbar Sadeghi brings the genius to modern. His Love and War series comprises large surreal scenes reminiscent of traditional Persian motifs and myths. These epic ink and acrylic works are fantastical, with a strong dose of dark humour. Sadeghi created several animated cartoons and is considered one of the most fundamental forces behind developing the techniques of Persian animation. The Flower Storm works, with bright animation celluloid on traditional backgrounds, are more current than contemporary. Your hanging jaw drops a good inch further when you see the date on the wall. All done in the ‘70s, these pieces are decades ahead of their time.

We now travel a decade back, cross the border into Pakistan and arrive at the Grosvenor Gallery showcase – the coup of the fair. To everyone’s delight, they have managed to unearth the virgin, private collection of Benjamin H. Oehlert Jr., who served as US ambassador to Pakistan in the late ‘60s. Which, conveniently for his collection and luckily for us, is considered the golden period of art in Pakistan. Sadequain’s abstract masterwork ‘Two Circus Acrobats’ could easily make the heart do splits. And one Chughtai in particular, an intimate sketch of two ‘Mughal Princesses,’ with its simplicity and detailed complication, delicate outlines and gilded patterns on aged ivory paper, is the stuff of legends.

Contemporary has a degree of excitement in the work that is untested. The artists are striving for excellence and you can feel this strive in each square inch of their work. The masters have nothing to prove. Modern is a finished chapter, a case closed, history suspended in time. It is transcendent and the possibilities are endless. If the UAE, with its sense of urgency, is like contemporary, then Pakistan is like Modern, albeit with an added air of smug complacency to it. You may have to brave more than a mile to get here and settle for a McDonalds in lieu of a Cipriani, but all the grand development schemes in the world can not create the culture and history that lies in a mere stretch of Lahore’s old city. We may have nothing to prove, but imagine if we tried anyway.

Seher Tareen is a writer and curator who graduated with distinction with a masters degree from Central Saint Martin’s, with a thesis focusing on artists from war zones and conflict areas in Pakistan.