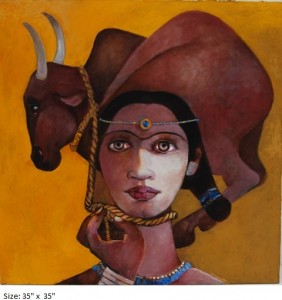 It is not uncommon for an individual to try to place himself in the current world by exploring linkages to his/her past. We tend to understand ourselves better through a historical lens, our past experiences moulding the present and lighting the way forward. Shammi Ahmed’s latest show “Beauty is Eternal” at the Momart Art Gallery explores such similar concerns, attempting to contextualize the present by looking five thousand years into the ancient history of Sindh.

The aesthetic affinity of Ahmed’s work to Jamil Naqsh’s modernist approach of the late 20th century is palpable, as she is a long time apprentice of sorts to the iconic painter. She visits him from time to time in London, carrying rolled up canvases in her luggage to spend days painting under his critical eye in her sister, Najmi Sura’s studio. The influence is clear, and although Ahmed started her career late in life, her commitment has resulted in a mastering of the technique and stylized aesthetics of the modern masters. Painted in layers upon layers of oils, the colour emerges luminescent, displaying both depth and translucency at the same time.

The work is a series of portraits of women, some self portraits, depicting the idea of feminine beauty with perfect geometric faces, full lips, big bright eyes, softly lit cheeks, and a flower held somewhere near the face in most of the paintings. However, these works also feature elements inspired from the Mohenjo-Daro and Harappa civilizations in an attempt to make a connection to our past. Ahmed is in a way searching for our Indus Valley ancestors within her, drawing comparisons between the artefacts from thousands of years ago and her current depictions of the face and figure. The result makes one ponder the ability of beauty to transcend time, and survive the rigor of the ages.

As a result, some iconic imagery and motifs from Mohenjo-Daro make appearances on her canvases. One of the paintings is split down the middle, with one half depicting a woman’s portrait, while the other transforms her into the Ajrak clad “King Priest” bust. This makes one wonder at not only the timelessness of beauty, but also its ability to take multiple forms and move beyond gender, turning into an abstract concept.

Elsewhere we see the “Dancing Girl” statuette with her armful of white bangles coming to life in all its asymmetrical beauty as Ahmed’s stylized nude figure. She strikes her iconic pose in two different works, seen once from the front with half of her taking human form, and once from behind seeming to be fully transformed into flesh yet remaining broken deformed. In others, the influence is more subtle, with the Mohenjo-Daro script appearing in the background, or the three-leafed flower motif from the King Priest’s ajrak adorning a woman’s forehead, or at times even dominating half the frame.

Another character that appears in multiple works is the bull, whose little clay figurines are a well-known artefact from the ancient ruins. In one of the pieces, a woman carries a basket full of the little figures, much as another carries a basket of flowers on a different canvas. In another piece, the rope tied around the animal’s neck wraps its other end around a woman’s neck, in a way connecting us with the past, but at the same time shackling us to it as well. This piece also seems to have certain feminist undertones with elements of restriction, as well as parallels drawn between a woman and a beast of burden.

The jewellery and white bangles worn by the women as well as the motifs and hieroglyphs seen throughout the body of work speak of the heavy influence the artists trips to the Mohenjo-Daro Museum had on these works. Each work in some way pays homage to the bygone era, connecting two different periods. It makes us ponder the vast influence these long erased ancestors have had on this land that we occupy, and how it has helped shape our current world and the people in it. While we are preoccupied with concerns of the future, it is worth noting that our very existence is dependent on those who have passed through here before us.