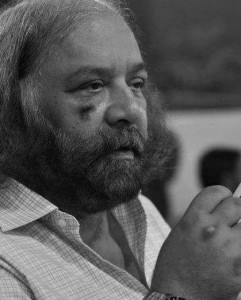 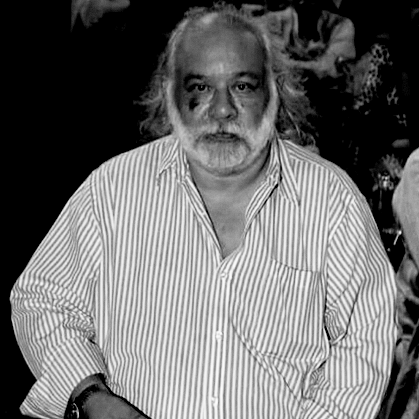 On 10th January at around 9.00 pm Shakeel had posted on our Whatsapp group two videos of classic old songs sung by Khursheed: “Panchi Bawra” and “Ghata Ghanghor Ghor”. I had always thoroughly enjoyed his choice of songs and his banters directed towards someone or the other in our close-knit CIAC chat group of artist friends. The next morning I had left Karachi for Lahore. I got a phone call from our common friend Seema the same evening; trying to tell me in a choked voice that our friend was no more! The news of Shakeel’s passing away left us devastated.

Shakeel Siddiqui was born in Karachi where his parents had migrated from Hyderabad Deccan. According to him, his father was a ‘Sunday painter’ therefore his children also enjoyed painting on Sundays. Although Shakeel completed his Matriculation in Science subjects, his heart was in the Arts. He was a year older to me. In 1969 we had both obtained admission at the Central Institute of Arts & Crafts, Karachi (CIAC). Syed Ali Imam (Imam sahib for all of us) was the school’s Principal from 1967 to 1971, after which he left to set up his own art space, the Indus Gallery. He taught us drawing and sometimes gave lessons on European and American art history.

However, by 1971 Shakeel had left for the US to study in New York at the Art Students League for almost two years. After his return to Karachi, he once again joined the CIAC. He was now my junior, but despite that our friendship did not suffer. There was a maximum of 80 students in the school, which roughly meant 20 per year, as it was a four-year course and friendships transcended across those four years. The disciplines taught then were Fine Art, Sculpture and Graphic Design, but most students opted for the latter as it ensured a job and a livelihood, and was aptly but rather crudely known in those days as ‘Commercial Art’.

I recall that before Shakeel left, there was one particular session in which Imam sahib was showing us slides of various paintings, of not only masters from the 17th century such as Rembrandt, but also Andrew Wyeth’s 1948 work, ‘Christina’s World’. The way he explained the moving scene in the painting – which is one of the most recognized works in American art, left a deep impression on all of us. However, for Shakeel it was perhaps in that moment that he had decided what he wanted to do in life and his pursuit took him closer towards the exacting realism of his paintings.

Much has been written about the artist’s oeuvre. He was referred as the ‘Houdini’ of illusion, and that it is not his craft of rendering but his brilliance in composing the various elements in his paintings that distinguishes him and makes him one of the most significant artists of the country. One of his paintings showing the back of a canvas in bubble-wrap secured casually with masking tape could make the viewer wanting to stick her fingers in the bubbles and burst them! Similarly, a lace table-cloth or a green towel thrown on the back of a chair, or a curtain ‘moving’, a half open wooden window, an old fashioned blind or chiq through which one could (somewhat) see houses across the street, made one want to touch and feel all those different textures.

Shakeel had returned from the US all charged up with his exposure to the works of the best artists in the world. Not only did his training in NYC do him good but his visits to art museums and art galleries there and elsewhere in the Western world had left him deeply inspired. His dream of visiting Andrew Wyeth’s studio had also come true. I can’t remember if his art class visited Wyeth’s studio in Maine or in Pennsylvania (or both, as Wyeth had two studios), but back at the CIAC Shakeel often spoke about his desire to paint like the masters…like Wyeth, or to be able to get the striking chiaroscuro effects that he was awed by in Caravaggio and Rembrandt’s works.

At the Art Students League Shakeel majored in portraiture. He also got an opportunity to hold a solo show in Portland, Maine in 1972. After he graduated from the CIAC in Fine Art in 1975, he focused on portraits and figurative works. He always enjoyed working in oil on canvas and seldom picked up any other medium. Soon after, when he moved towards still-life, he continued in the same medium.

The modern art world moved on from Impressionism to Minimalism and in the 60s to Conceptual Art (e.g. Performance Art, Installation Art, Video Art, etc.), and later, in the same decade, the Photorealism manner of painting had also appeared. In this style, the subjects were painted in a highly detailed way, resembling photographs. This Photorealism was largely inspired by Pop-Art, but it wasn’t whimsical like the latter. Photorealism gave way to Hyperrealism, with leading artists such as Chuck Close, Richard Estes, Audrey Flack, Jason de Graaf, Steve Mills, and others making still-life paintings in acrylics and oils.

Shakeel has been termed a Hyperrealist or a Superrealist.

It was in 1979 when Shakeel painted a table covered with a lace table-cloth for the first time that people sat up and noticed him and unlike Wyeth, whose popularity with the American people was not accompanied by the approval of art critics, Shakeel did not get any negative backlash from critics for being ‘conservative’. His painting was sold and Syed Ali Imam encouraged the young artist to continue in the same style. Besides Imam sahib, our other teachers included noted artists Rashid Arshed and Bashir Mirza (‘BM’ for him was coined in our times).

Shakeel was offered a solo show at the BM Gallery in 1978 and at the Indus Gallery in 1996. Chawkandi Gallery held his solo show in the year 2000. In 2001 Shakeel had a solo in London where he also completed a short course in restoration of old paintings. That training was useful when he was offered the restoration job of more than 100 paintings of the Pakistani master painter Sadequain, including the large 60 x 8 ft mural, which is now housed in the State Bank Museum in Karachi. After a solo in Holland in 2003, the following year he again held a one-man show in London. Shakeel had lived in Dubai for almost 13 years, teaching at Dubai International Art Centre from 1992 to 2004. He had also held several solos in Dubai and in Canada in 2008 and 2013.

Outwardly, Shakeel appeared as this meticulous and serious artist – which he indeed was – but he was the funniest in our group of friends. The live wire, who made us roll with laughter at his repartees and jokes. Unfortunately, Shakeel was diabetic, overweight, negligent of his health, and his eyesight had taken a serious beating due to the intricate brushwork that he carried out in artificial light all night long. Each time we brought up our concerns about his health, he made light of it. He lived alone in an apartment in Clifton.

Canada was his second home, and his only child – daughter Zainab lives there. Shakeel visited her less than two months ago before he called it quits forever.