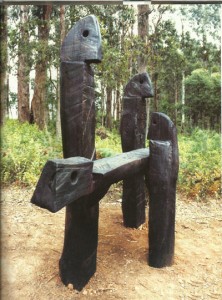 The monograph on Shahid Sajjad, written by Akbar Naqvi, comprises a set of original essays published in 2007 to coincide with the sculptor’s retrospective held at National College of Arts, Lahore. Naqvi and Sajjad have shared a long standing association, with Naqvi privy to many of Sajjad’s works during the process of conceptualization, fabrication and installation and Sajjad partaking in Naqvi’s erudition through long sessions of debate and discourse. The result of their association has been a visibly seamless communication of ideas between the two and the consequence has been a laudable publication that rings true even before we delve into its pages.

The book “Shahid Sajjad’s Sculpture, Collected Essays” has archived for posterity, the life and career of a man who evolved into a sculptor intuitively without being ‘processed’ by the rigours of art school or formal training and benefited by the freedom. In his first chapter, Naqvi creates a space for Sajjad that gives his art immediacy and relevance, although the means he chooses to do this is though comprises of a seemingly long and esoteric metaphor. He alludes to the fable of the Conference of the Birds by Fariddudin Attar in which the birds set out on an explorative journey impeded by travails and hardships only to find that the truth they had set out to search for was to be found within them. In the context of the story, Naqvi says “Shahid’s life and work appear extraordinarily well-integrated between its modern circumference and traditional centre. It is when modern European dialogues collaborates with modern sculptors and painters outside European societies that truly universal craft-art comes into existence that is liberated from the hegemony of the West with its so-called liberal values fabricated in the smithy of imperialism”.

Naqvi uses the term ‘craft-art’ for Shahid Sajjad’s work as if he were in cognizant or superciliously dismissive of the chasm of debate that divides the proponents of the two words, each maintaining the exclusion of the other. But Naqvi is neither unaware nor disdainful. He says that the two words used as a composite phrase have evolved through a great deal of introspective and written deliberation and reminds readers that they should revert to history for elucidation. All art requires skill and the perfecting of the craft and it is the human engagement with the idea that makes it art. But there are no original ideas, he states. Naqvi refers to Edward Said who said that creation was a one-time phenomenon, the expression of divinity in the form of Nature. All human expression since then is only representation of the original creation.

Because the book is a compilation of essays, it does not follow a chronological linearity. This device helps the reader to plunge into the deep end of the story, so to say, without having to suffer the tedium of biographical data; the route that that most monographs follow thoughtlessly. Naqvi declares that he has made use of Urdu poetry, specifically of Mir Taqi Mir, to explain the art of Shahid Sajjad and it seems an unnecessary conceit until we read the trajectory of his rationale.  He writes

“The Urdu ghazal based mostly, though not exclusively, on the theme of unrequited love leaned heavily on the analogy of idol worship as if anathema was a mandatory step to a state of grace. Like other classical Urdu poets, Mir’s knowledge of sculpture was based on Persian poetry and its stock of sculptural imagery from the Sassanid period of Persian history. The history of carving monumental stone sculpture for royalty in ancient Persia was incorporated into poetry for two reasons. First it symbolized the heartless beauty of the beloved. Secondly, the lover separated from his beloved turned into a sculptor, carving the beloved’s image during interminable hours of agony”. It is Naqvi’s profound reading and understanding of both Urdu poetry and modern visual art that has provided him the unique position to make this fluid connection between two disciplines. In the art industry, many critics and artists have only recently woken up to the realization that we must devise ways to bridge the abysmal gap between disciplines but with little hope of any change in the immediate future.

Naqvi traces Shahid Sajjad’s arduous journey through the development of his ideas and handling of materials rather than through chronology. He tells us of Sajjad’s primitivism that was not of the western exotica variety but representations of primordial man, unsophisticated and unblemished by societal conventions. Shahid Sajjad travelled to the rainforests of the Chittagong Hill Tracts in what was then East Pakistan, where he lived amongst an aboriginal tribe of people called the Chakmas in a forgotten village of Marishia. “The forms or figures carved in wood by Shahid in the grove of Marishia were not handsome or beautiful, if the sculptor is to be believed on evidence of his experience. On the contrary these images of preciously wrought ugliness and raw naturalness were carved into a state of sublimity, immediately engaging, shocking and repulsive but of magnetic presence and appeal”

Naqvi tells us of the incidents of bigotry faced by Shahid Sajjad as the maker of proscribed forms. Sajjad spent a few months in a large factory at Mansehra carving gargantuan expressionistic figures. The workers at the factory watched but remained silent for a long time until they could not restrain themselves and finally confronted the artist asking him why he indulged in the hedonism of form-making when it was forbidden in the Book. Sajjad gave them a seemingly ambiguous explanation that the form was only a representation of the intangible elements of humanity. Surprisingly, the reaction on the part of the workers was stoic acceptance of Sajjad’s words. But the majestic figures were not to be treated with such civility in Karachi. A group of zealots issued warning against the display of the figures, threatening Sajjad with dire consequences. As a result these ‘fugitives’ as Naqvi humorously calls them were relegated to Sajjad’s backyard.

The book is a fascinating read and though it lapses momentarily into pedagogy, Naqvi does not lose the thread of the discourse and keep us engaged in the imagery of Sajjad’s works and his primeval and ontological relationship with his sculptures.