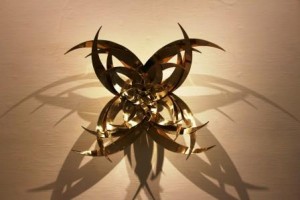 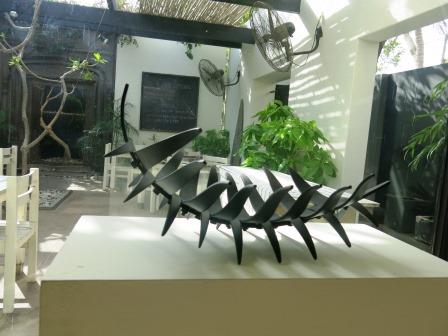 Fahim Rao’s recent works at Koel allows for the tangible to convulse into the insatiable. He reminisces anecdotes of childhood naiveté. His installation titled Saanthwaan Period nostalgically addresses the displaced views surrounding the idea behind punishment and accountability. His fiberglass sculptures stand facing the ground with their head between their legs; the notorious “Murgha” position. Distilled memories rage within as one sees his work. Drawing a parallel between innocent mischief and rather blatant crimes, it leaves the viewer with an abashed resonance.

Rao’s iron, brass and steel structures were a profound manifestation of the intangible within the realm of the tangible. Crescent-like forms impeccably arranged to the length of spines, protruding with defiance. It forces the viewer to seek their own distance. The abstract nature of the work bespoke with a silence, one that yearned to speak. Much like the punished children, immortalized, in the face of an unannounced mischief, his work settled it’s own rage by complying with the idea of stagnance. The forms although suggestive of movement, were contorted into a moment, a time..

Through the course of his works one finds the tangible manifestations hinting towards the invisible. To bear witness to a punishment, plays to the nature of surveillance when the viewer is invited into the space. The power of gaze is one that allows the hierarchy to be established. Rao’s work encourages the viewer to question their roles as innocent bystanders or victims themselves.

When the viewer finds himself conversing with his metal forms it awakens the notion of meticulous transgression. The beauty of abstract works lies within the variability of it’s readership. His forms rest in a kind of organic symmetry that engages, yet the sharp edges force the viewer to maintain distance. The forms are reminiscent of sound frequency waves. The idea of visuals sans speech allows for a unique medium of communication. Although a pattern has been arranged, it is seen as tactile entity. His works resonate with a sense of being lost in translation. An invisibility, of sorts.

There is an assumed symmetry in state laws and administration, where the lines aren’t as blurred as a teacher stating punishment for mischief . Crime, in theory is a legally defined term. But in practice the nature of offense may be easily evaded.

Rao’s work then becomes a comment on a the idea accountability, or the lack of it. It renders the viewer as silent spectator, allowing room for introspection. While the gallery space offers room for spectating art, does it allow the possibility of spectating transgression. While one skips around the blurred lines, there is no room for reconciliation with treason.

Punishment enforced through state-apparatus has been withdrawn from public spectatorship, it has been transferred into an enclosed space. The symmetry of movement from trial to accountability has been traversed with political nuances, that reckon with an asymmetry.The authority of law itself becomes fragile. Rao’s forms embody the idea of the uncertain and the certain, the tangible and the intangible with immense profoundness.

Rows of tables and chairs, girls and boys clad with uniformity, a dusty backdrop serving as the canvas through which lessons are taught. The teacher hands out disciplinary measures as he/she sees fit. It’s flexible. Discipline handed out through state-apparatus dispels the notion of such flexibility, and yet when the act of crime and the evasion of conviction falters it opposes the very notion of symmetry.

Rao enforces a nostalgia that eerily leaves the viewer with question. The role of the spectator becomes of concern. The probability of law in the midst of chaos and the exhibition of punishment invokes the precarious nature of state-ordained conviction. Having children pose as the victims allows the viewer to question the nature of authority, in a manner that leaves the gaze of said viewer as redundant.. While the viewer may be given the ability to survey, he is still under a state-ordained surveillance. A simple act of perhaps a ‘society watching over itself.’

Rao’s work poses an ambiguity, which allows for a creation of a varying gradation of response. His works read with a abstract defiance, however at the same time it brings you at face with an unyielding submission. The political anatomy dictates the nature of punishment, but it may not always be a variable result of crime. It is this asymmetry that reckons throughout the space; one that falters at sight of children in docile submission. It plays on nostalgia, inviting the viewer within the command of the very anatomy it seeks to critique. As result the crowd becomes the ultimate spectacle.

“Traditionally, power was what was seen, what was shown, and what was manifested..Disciplinary power on the other hand is exercised through it’s invisibility”  Michel Foucault