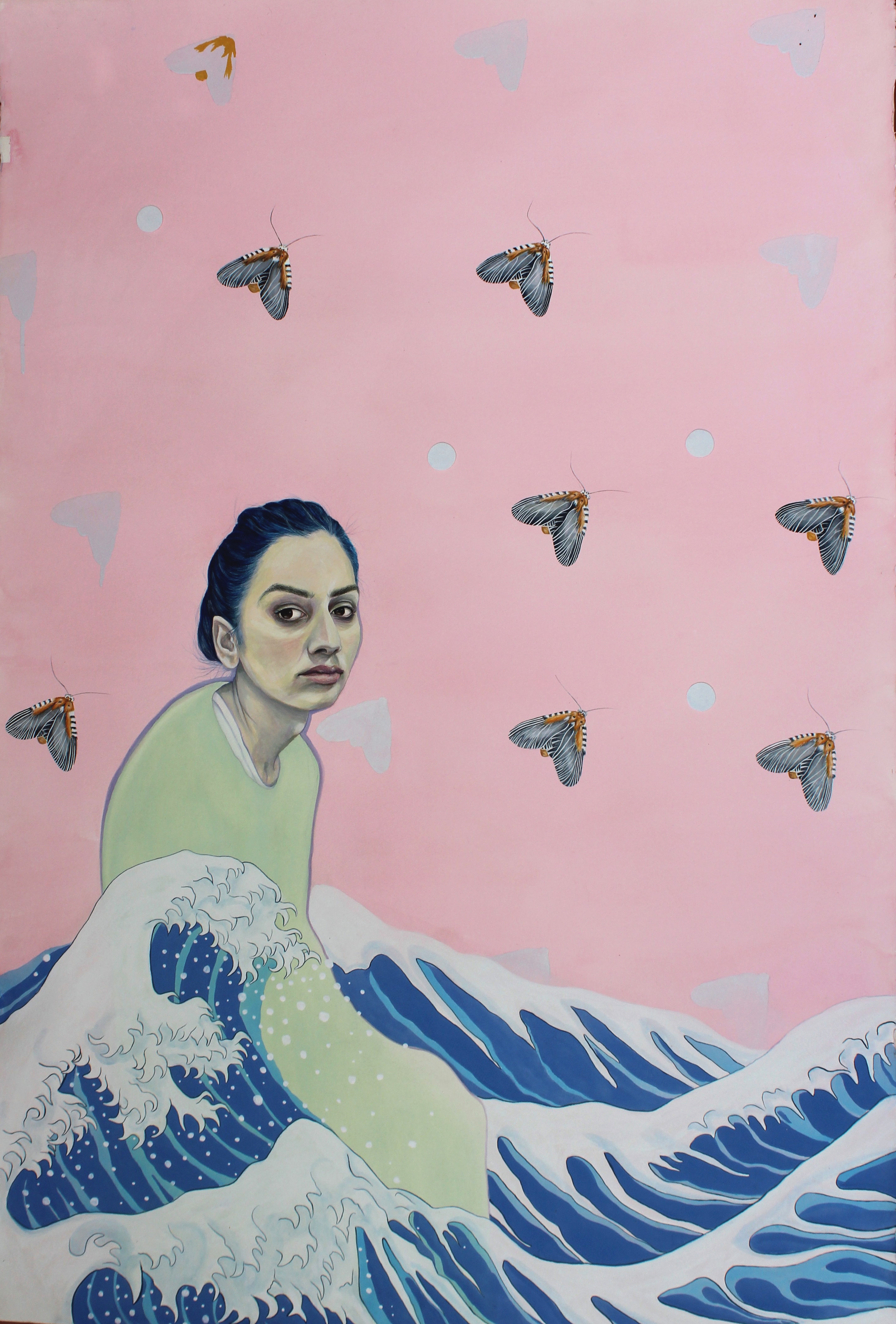 To touch…. to see, to speak, to hear and to smell yet luckily not everyone is capable of remembering everything that has ever happened to them nor are they able to perceive everything that’s happening around them.  The magnitude of these humanly senses and the exposure to such violently sensitive information rightfully violates our right to ignorance – so to speak.

A situation that allows us to rightfully block/absorb what we need, we want, we think we need and want and what we actually really want is again a contradiction between the eye and the mind. The light entering the eye and reflecting the images formed can be as deceptive as the brain which given its resources sorts out and puts everything together to form a mental picture. Females have their own perpetual symphonies of deciphering these mental images and breaking down these information’s sent and received. Hoor Imad Sherpao and Noormah Jamal seem to have ventured upon something similar- in their own manner of interface of course.  The duet exhibited their body of work at the O Art space Gallery on 31st of August, titled ‘ The beautiful-the bizzare’

The amount of information available by these two women seems to have to been camouflaged by patterns, colours ,shapes and forms that surround and decorate the female existence. The halo that continuously carries these bodies of works wants to negate the cliché stances of being a female and the cultural identification of these, yet only landing on them once again to address the existence of cliché connotations in the first place.  It was not a surprise to land upon imageries of the female gender painted in feminine pastels, dramatically bold patterns, the setting, the assemblage of gold leafing and pigment, the gaze and the confirmations/affirmations of these faces.

The “realism” of the iconography of women in art is created by cultural, societal, and theological presumptions. From goddesses and female heroes, to female prophets and lovers, to female demons and seductresses, to daughters, mothers, and wives, female imagery has visually encompassed all the conventional and fantasized roles—proper and improper—envisioned by men.

The acceptance of the bizarre for these women is much greater then what they have presented for It’s not out of the ordinary that the more the female accepts her existence, her flora, her need to exist for self, the more out of the ordinary she seems. The adjective bizarre defining something as unusual is a constant mindset  in our’ social animal’ oriented environment that constantly sets back the mindset of the masses and disrupts their comfort when a female [ a being ]accepts her reality, in all regards.

Hoor  Imad sherpao’s overwhelming metaphorical use of gold and the floral embellishments resemble the formation of the female figures in Gustave Klimts body of work. There seems to be a similar celebration of the sensuality that is being veiled and addressed with ornamented understanding however here infused with traditional mughal art yet the sentimental iconography of her work seemed much confrontational and aggressive in nature.

Women have influenced and bent religious values in all world cultures, whether formally or privately, yet the question is to consider of how religions have influenced, shaped, oppressed, and/or liberated women. The socialization development through which one becomes a member of a religion, a society, and a culture includes the production of a male or female identity.

Noormah’s work seemed to have embodied a similar junction where it blurred out the distinction between the categories of sex and gender. The meaning of both the human body and the connection it can have with one another, the way it weaves out relationships seemed to have been the highlighting narrative of her work. The compositions of each of these bodies collectively reflected a secretive and piercing commotion. A similar confrontation was seen in her figurines that were delicately placed side by side almost embodying each other’s presence. The fingerprints, the marks and the impression of her own hands that went into making of these was a significant act of honouring the truth. Overly exaggerated yet silently confrontational expressions with combinations of over and underdone tones were far considerable as a body of work in comparison; the one that managed to bring out the most of her concerns.

The conflict between the self and the other, you and I, him and her, her and her and many other, constitute the central moral problem for women. It seems to contrast and erect a dilemma whose declaration requires a settlement between femininity and adulthood .A good women will manage to make and mask out assertions in evasion, denying responsibility by claiming to meet the needs of others, while the bad women abandons or renounces the undertakings  that bind her in self-deception and betrayal. It’s this tension between compassion and autonomy, virtue and power, religion and culture, sex and identity that we are haunting the hierarchy of us, beings, thus the feminine voice struggles with attempts to resolve and reclaim the self and to solve the ethical problem in a way that no one gets hurt.