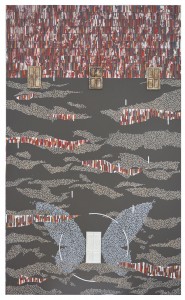 Stroke by stroke of glossy, rich paint sits deliciously together in continuous, linear rows of earthy tones. When applied dexterously with a flat edged brush, the paint latches on to the surface as iron to a magnet, and rests there peacefully. Often, however, it is torn away and etched out from its newfound home by the surgeon-like hands that work on it, and, as if to pacify, rewarded with deftly cut-out paper forms that texturally enhance its surface. The hands work to-and-fro, painting, stroking, etching, cutting and sticking, till the eye zooms out to observe the delightful forms on the marvellously rendered artwork, just born.

This is perhaps artist Saqib Mughal’s process as he works on his detail-oriented pieces. An artist in diaspora, Mughal lives and works in Miami, Florida, pursued his Masters degree in Texas, and recently completed a Certification in Roman Architecture from Yale University in 2014. At his recent solo exhibition at Koel Gallery, titled ‘Zindan-e-Khayal’, Mughal displayed a total of fourteen large mixed-media works of varying dimensions that gave the viewer a two- and as well as three-dimensional visual experience.

When seen from afar, Mughal’s pieces have four things in common: the illusion of the canvas being a textured wall, the emergence of butterfly forms, the use of the door as an element, and a row of small circular or square canvases, often accompanied by little doors placed directly above or on the surface of the main canvas. His piece, Rearrange, predominantly grey, employs various shades of the colour speckled with red and orange that appear to represent textured wall, carrying three brown three-dimensional door forms in a row. A white door far below, with large butterfly wings composed of forms that resemble astronomical star mapping techniques, seems to lay in wait, as if determining which brown door to open. With a circular form around the white door that looks like a target symbol, Rearrange reminds one of video games where the player’s choices, and moves, determine the outcome.

Perhaps Mughal sees the human being as a character in the much-larger, yet ephemeral game of life, where his choices reflect his success or failure. The show’s title, ‘Zindan-e-Khayal’ translates to “the prison of thought” or “imprisoning thoughts” that can lead a man to his doom. Mughal states that butterflies, walls and doors are “symbols to highlight the imprisonment of curiosity and awareness”. Butterflies can symbolise change, metamorphosis and beauty; or, they are delicate creatures with a short life span. Secondly, the door can symbolise opening of new avenues and dimensions; yet, it could mean being closed-in and shutting oneself off from reality. Where such contradictions exist, it is ones perception that becomes key.

In his piece, Hisar (fortress), hundreds of butterfly cut-outs cover the entire canvas, with a stream of darker butterflies circling a centrally placed white door. The piece strangely reminds one of the Muslim ritual of perambulating the sacred Ka’abah, and also seems like the butterflies are the protectors of the door. Mughal mentions, “I employ butterflies as a symbol of change and wondrous flights of the imagination. I chose the butterfly because of their innate curiosity, freedom of movement and vibrant colours”. Hence, he speaks of the power of these delicate creatures.

Juxtapose displays, in muted yellow ochre tones, a large butterfly covering the expanse of the canvas, with a door in the centre. The butterfly’s colours seem to be dripping down or draining away, as Mughal feels “the butterfly is losing something valuable by being in a motionless state’. Thus, inaction and going against ones nature leads to loss. About the door, he states, ‘the wooden doors at the centre of the butterfly’s wings depict an imprisonment of vision, or khayal. For me doors embody a very interesting characteristic; they are a way to escape or to isolate you from the world. I see doors as a ‘Decision Point’ to get out or close on yourself’.  For the accompanying small round canvases fringing his painting, Mughal states they symbolize small windows, and along with the wall and door represent the idea of home.

Independence Celebration is Mughal’s most striking piece in terms of colour. A butterfly rests inside a bright scarlet circle that is offset by the dull background.  While the centralised door itself seems to be dilapidated and rusty, the white dotted speckles that surround it denote an air of festivity. It seems to be the result of the butterfly’s struggle for freedom, perhaps referencing the subcontinent’s struggle for independence, or rather the artist’s personal struggle in diaspora to represent both western and eastern influences in his work. Here, too, appear dichotomies; is red the colour of celebration of independence or blood lost in its endeavour? Does the rusted door denote freedom or a futile effort?

Perhaps Gisella Rivas best sums up Mughal’s work as she writes, “Saqib’s paintings… speak of suppressed aspirations, while tactfully awakening nostalgic sentiments and wistful desires. His artwork is analogous with the cultural canvas of his Oriental and Pakistani land with influential strokes of modernism.”

Shanzay Subzwari is an artist and art writer based in Karachi. She tweets @shanzaysubzwari