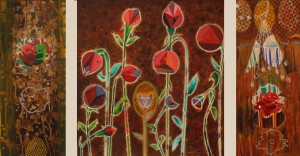 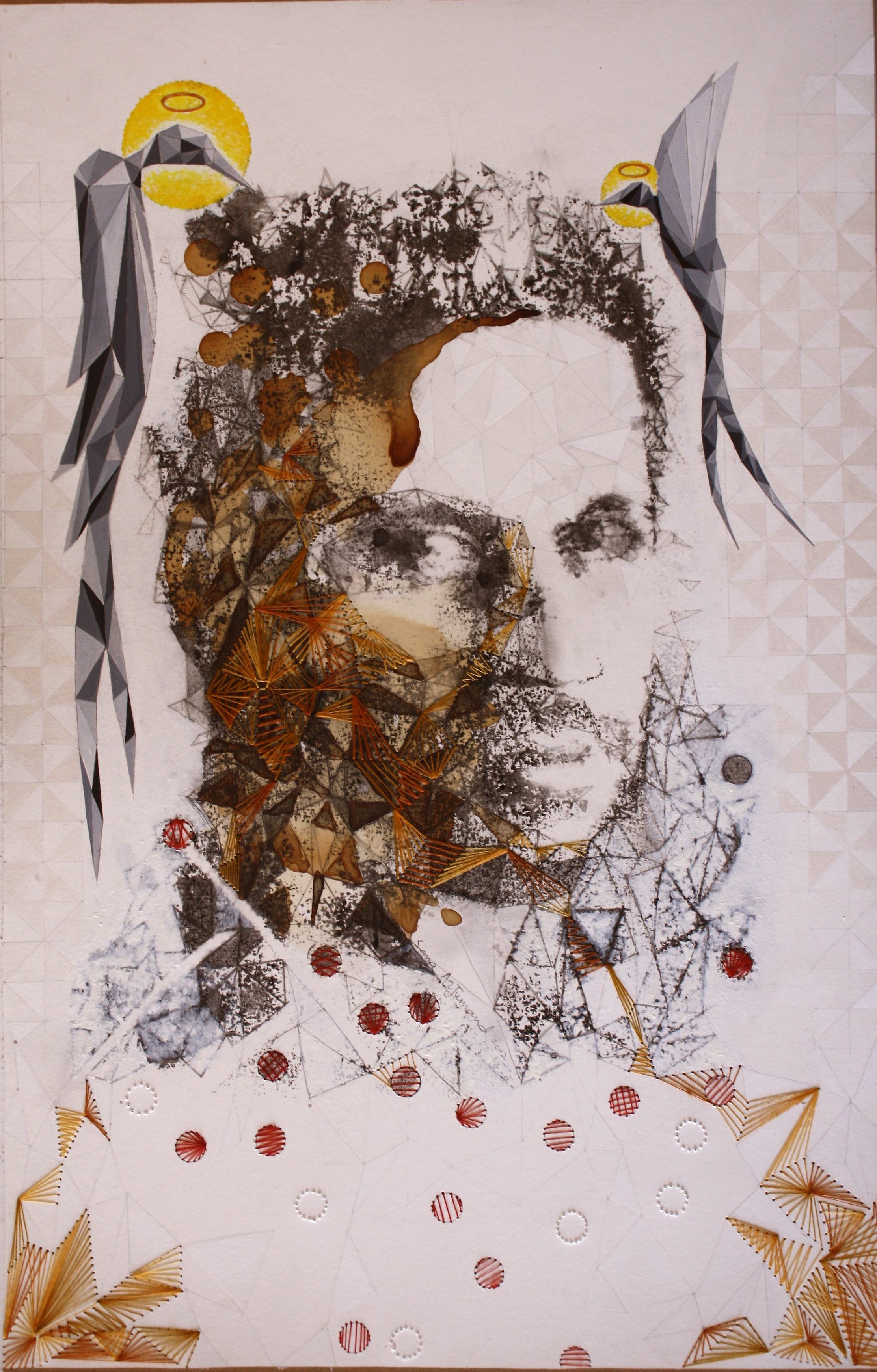 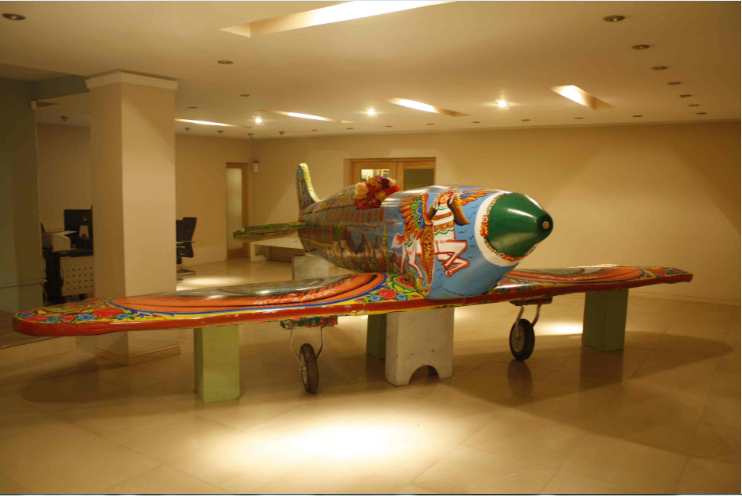 Sana Arjumand: Peeling Away the Layers

Sana Arjumand’s studio is light-filled. It hits you as you climb the stairs from her house to the top storey where she works. Light floods the place through bay windows. Then there is the familiar smell of paints and linseed oil, turpentine and canvas that typify the aroma of a painter’s studio; the aroma of creativity.

Canvasses are stacked along the walls, some I recognize, some I am told are not yet for public eye, but the color and vibrancy of Arjumand’s work is immediately apparent in the images. There are stacks of sketch books and journals as well, some warped and bent and upon inquiry I am told this is a result of water damage from the monsoon season: “the colors are blurred and they look a bit funny” but they are more interesting now, quips Arjumand. “My studio is half a scrapbook” she continues, “collections of things – files upon files of photocopies. I save cutouts from magazines, newspapers; I have my journals, I take a lot of pictures on my camera, even voice recordings to remember stuff.” From there, she says, her artistic process is usually triggered by the connection an image or object makes with a concept she has been mulling over. The object could be anything, from a tree to a bird, a house or an everyday item, but once that connection is established, the work usually flows organically. Music also plays a part in her artistic practice: “Music has a big influence on my inspiration- I love listening to music in my studio.” She says.

Born in 1982 into an art-loving family, Arjumand was interested in the arts from a young age. One of her earliest memories is going with her mother to a screen printing workshop at the Wamiq centre in Karachi. She remembers looking up from her hiding place under the table and watching her mother apply maroon color onto the screen. Her father when not at work used to paint, and both parents have been a strong influence in her artistic development. She studied at the National College of Arts in Lahore, graduating in 2005. She has enjoyed critical acclaim in the short years since, with many successful shows and residencies. Her 2009 residency at Art Omi in New York was one of her favorites to date: “Omi was once in a life time type of an experience. It is every artists dream come true. I made some amazing friends that I would love to see again,” she tells. Also in New York, her exhibition of ‘Let’s fly first class’at Aicon Gallery was a fantastic experience for Arjumand. Locally, her first solo exhibition was held at Canvas Gallery in Karachi and was well received and widely covered. After marriage Arjumand has had a number of exhibitions internationally including in Sydney, Dubai and Mumbai this year.

As we talk the conversation steers into how becoming a mother has influenced her work process in an unexpected way. Firstly, it has become more fluid, and out of necessity, her work has become smaller. “This has actually made me see another side of my practice that I wouldn’t have been able to discover, smaller pieces with more attention to detail.” Smaller pieces also enable her to work wherever she needs to, as time in the studio is not always possible with a small child. “One thing that happens is that you start realizing the value of time. You understand that there is a relationship of your work and your technique and timing and you want to make the most of that time. You stop planning and analyzing what the end result of your work is going to be but start to enjoy the process of it. You really get into your own journey, your own energy and it becomes more refined because of that. I really enjoyed being really close to the work physically, holding it, staring and it and analyzing it bit by bit, inch by inch.”

On one side of the studio are bits and pieces of canvas with digital test prints that I recognize from Arjumand’s Aicon Gallery exhibition works Let’s fly first class, featuring an airplane fully decorated in the traditional folk style common to trucks in Pakistan. Many people assume that this was all digital work, however Arjumand is quick to point out that the airplane in the prints is all handmade – and at 22-by-24-feet, it’s almost a life scale model. She tells me the model plane was the first thing to arrive at her husbands’ house as a newly-wed, and the buzz on the street was that the new ‘bhainjee’ owned her own airplane!

Arjumand enjoys looking at work by painters such as Julie Mehretu whose layering and technique she finds very fascinating, “Lisa Yuskavage has an amazing paint application” she says, and she loves the simple yet conceptual images of Peter Doig, “they pull you in,” she says of his work. One of her favorite artist is Augustin Lasage whose work is spiritual and focuses on similar interests as hers. Her reading lists include lots of scientific works, especially about creation, the Big Bang, Quantum physics and the like. Philosophy and biographies also feature in her reading library. Maira Kalman, Eduardo Galeano and Eckhart Tolle are among her favorite authors and she is fascinated by writing on Spirituality and experimental psychology.

As we talk about her influences and interests I ask about the increasing presence of geometry as a central element in her latest works. Almost Escher-esque, the planes of space and backgrounds to many of her recent works, as well as the geometric, origami-style many of her figures have taken on symbolize to Arjumand the ‘peeling away’ of layers of self.  Her 2012 work Nesting in the sparkle of your eye is divine flight’ is a good example of this concept at play. Arjumand says that it’s about letting go of the ego self. The geometric birds in the painting are symbolic of divine beings: an intervention from above ‘taking you higher’ and what’s left behind is white space, and the geometry of the face left there is a representation of the inner dimensions being revealed. “What you see in this work is the process of the human being, from holding on, to letting go. The process of peeling away layers of attachments, and identity, to realize inside you’re just a light.”

Identity plays a strong part in Arjumand’s work, and it is interesting to witness the progression of her exploration in the images she creates. Her older works seem to suggest a search for identity in relation to what is outside her: what does it mean to be Pakistani, who am I as a woman, as a married woman, as a mother? In her recent works, she is now looking inward, still seeking the essence of her core being but in relation to what’s inside; in relation to Spirit, to God.

I’m still curious about what’s on the canvases she won’t show me, so ask for a hint of what’s next for Sana Arjumand. She replies coyly: “hopefully more peeling of the layers…”

Cosima Brand is an editor and writer living in Pakistan.