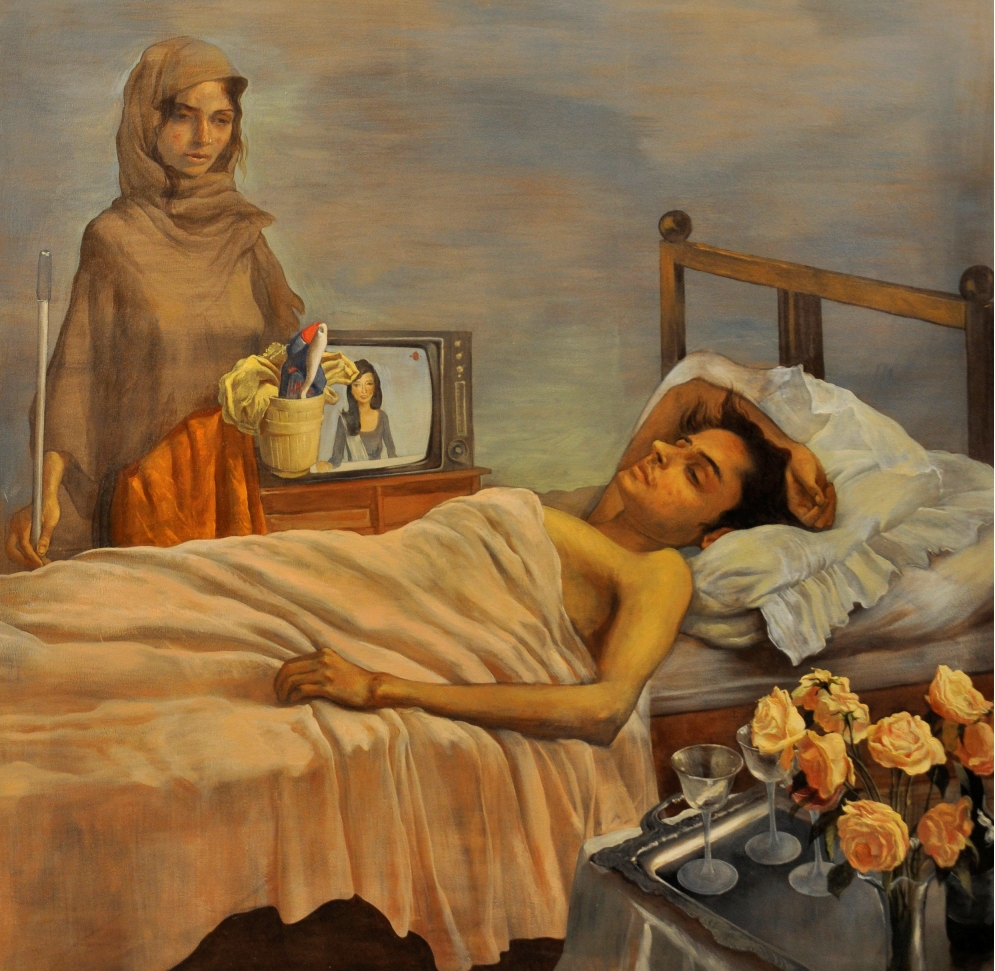 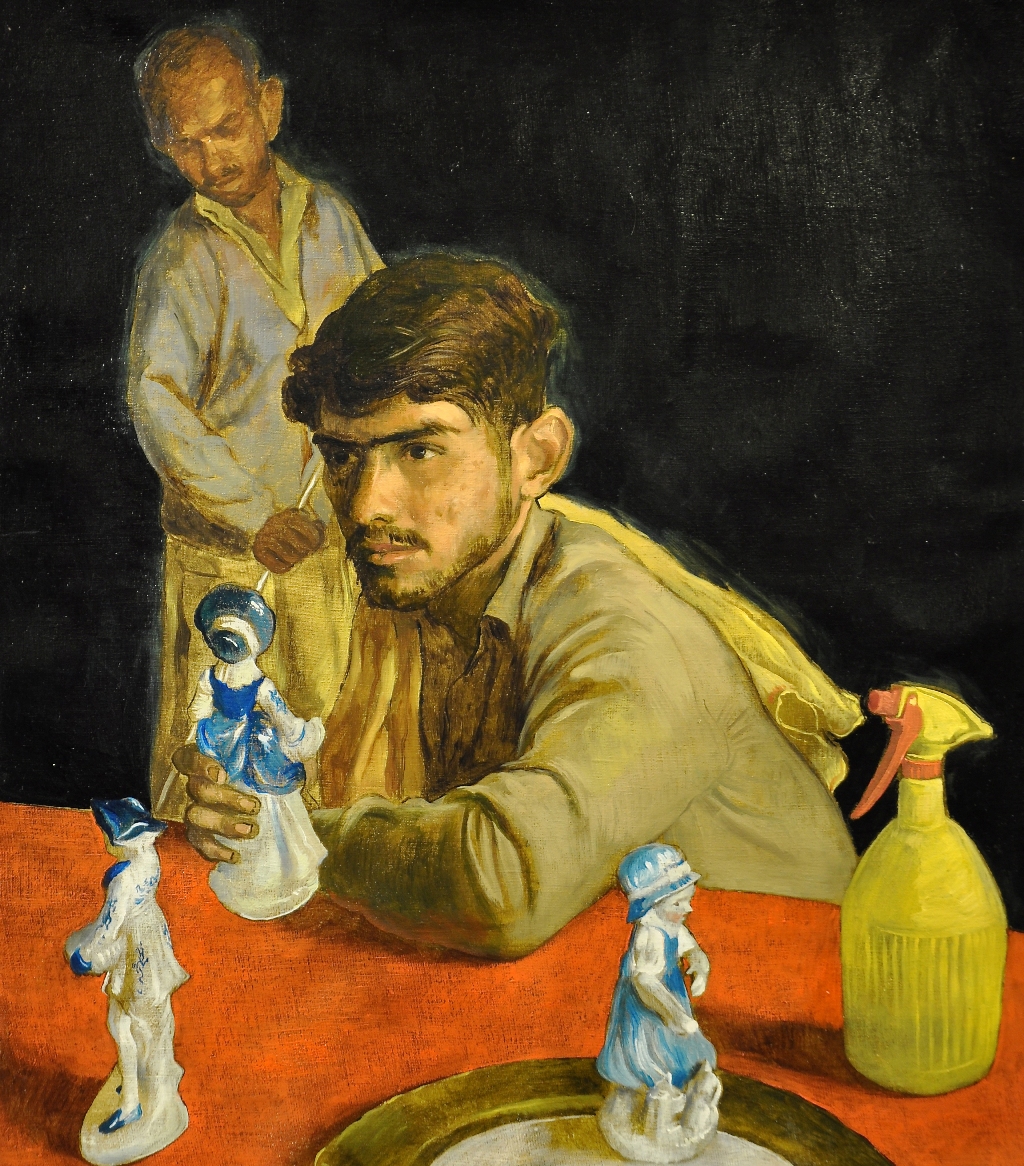 Salman Toor: Around the Bourgeois

Lower, middle and upper: Pakistan’s distinct and jarring class divides. Living in this striated society, most individuals within these cultural tiers amicably (or perhaps conflictingly) coexist and often develop lifelong bondages; the relatively upper classes develop relationships with their drivers, servants and baby sitters, but how many of us imagine or fantasize an intimate relation with them? Salman Toor, in this series of paintings titled Close Quarters, at Canvas Gallery, Karachi, delicately explores the intricate and unnoticed connection between poverty, affluence and pleasure. It inadvertently puts either one of the social strata as the other, nonetheless, romanticizing the vital interaction that subsists between the two. Interplaying with glimpses of images inspired by Western art history and metaphorical interpretation of popular imagery, Toor brings forth an exclusive array of anecdotal experiences of closely interacting with the ‘serving class’ from maybe a third man’s perspective.

Grown and raised in an economically privileged environment in Lahore and now working between New York and Pakistan, Toor deeply feels the subtlety of these close experiences hands on. Initially, with an uninformed or less engaged perspective, I found the work to be patronizing and elitist but the density and maturity of its content is realized much later. It touches upon a fetishism for the ‘servitude’ and their distinct ways of living that tend to be in high contrast with the bourgeois culture or elite of Lahore, where poverty does not confront but beautifully blends in with affluence. The artist seeks pleasure in immaculately creating forms that graciously interplay with their translucent layers. The work pulls you back to the works of 16th and 17th Century western Old Masters and Impressionists but instantly brings you back to the desi present with contemporary local advertisements, photojournalism and popular national icons.

Toor unveils small gestures and excerpts of Rafiq’s, Ali’s, Arshad’s and Ramzaan’s lives. Some of these individuals, as Toor’s household help, have been frequenting his work since many years as key protagonists. In Arshad and Ramzaan, Ramzaan stares into space as he holds a white porcelain sculpture of a wealthy lady dressed in a lavish royal gown with the jhaar poanch ka kapra placed on his shoulder, while Arshad, the other helper, indifferently continues to mop the floor behind him.

A dimly lit servant quarter represents a few moments of grim humor in Ramzaan’s Room. Toor exquisitely twists the narrative here by converting an uninviting, bleak and formidable space (for a typically elite urban household – and as judgmental as it may sound) to one which subtly flirts with the viewer and compels one to voyeur the small claustrophobic room as an aesthete. The orange slippers in a corner quietly lead us into the painting to reveal the details of an intimate space that seems to have been recently abandoned by its occupant. Heavy linen blankets soiled with overuse are plopped on two beddings and a few shalwar kameez are hung systematically on one wall beneath a wooden plank. Half hidden with a dark shawl and a towel, but soliciting massive attention, is a Chaar Qul leaflet pasted on the adjacent wall.

Ali’s Room breeds a similar feeling except that there is a stillness in the deep dark silence seen through the open door and window at the far end of the room. This disturbing black void and a silver tray lying on a long wooden table lead us to another painting that is just the opposite in its mood. It embodies the festivity and superfluity of a gathering where a young boy in shalwar kameez is serving alcohol in expensive crystal glasses (under the same silver tray) to a couple who seem to be compassionately in conversation with, or intently watching, the boy pouring the drink for them.

The Maid with Sleeping Boy unfolds a similar relation between the server and the served but with more directness and aggression. An urban household maid, holding a mop and mug with cleaning accessories, passionately stares at a young shirtless boy sleeping on his lavish bed. The work might appear to be faintly literal and obvious but it has mellow undertones that reveal more than the obvious. The male body posture is sensual and noticeably feminine as Toor consciously employs selective realism to his figurative forms in this painting and a few others. With refined aesthetics, he has consciously stylized his figures. However, this time, one might want to expect a bolder and riskier breaking away from his ultra-realism. Owing to his remarkable understanding of form and oil paint, Toor, at a distinguished stage of his career, certainly has the license, ability and perhaps responsibility to transcend his style of work and maybe distort or exaggerate his imagery and narratives more fearlessly as he employs multiple vocabularies to the paintings.

Halloween Party talks about high end revelry set against a back drop of a typical Impressionist landscape with a local, brightly patterned shamiana. A Frida Kahlo look-alike swings her hand around a boy wearing a vampire mask while a Jinnah-resembling man watches their intimate affair. Most of the dancing men are clad in desi, suburban outfits while the inebriated women are decked up in skimpy western dresses. The Picnic also dwells between a surreal and culturally hybrid scape. It weaves the urban with the rural. Young boys and girls revel in each other’s company under a banyan tree while two ‘servants’ keenly observe them from a distance.

Through familiar iconography and crafted clichés, the work bridges conversations between servitude and extravaganza, high morals and debauchery, western celebrations and contemporary native locales, the shalwar kameez and the imported. It is intense and engaging for those who can relate to the nuances of this relation and, of course, a treat for the all the traditional oil painting patrons who get to see this medium rarely now in Pakistan. This subtextual reiteration of an unsaid, yet deeply felt, experience is muffled and subdued. It mystifies the intimate affair further. Small crispy, ethereal thoughts freeze in time but leave us with intangible moments to hold onto. A pleasure for the senses and soul alike.

Rabeya Jalil is a visual artist and art educator who is currently affiliated with the Fine Art Department at the Indus Valley School of Art and Architecture, Karachi.