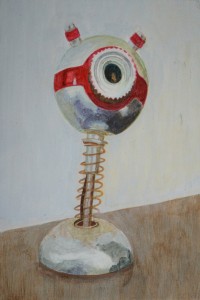 Sailing Through the Looking Glass

“No matter how much time passes, no matter what takes place in the interim, there are some things we can never assign to oblivion, memories we can never rub away.”

― Haruki Murakami, Kafka on the Shore.

Zoha Khan’s paintings take one back to the past and a long-forgotten era. The images seem to be filled with floating whispers and voices; memories of the living still hanging on to the objects, like the rhythmical interludes in which the musical instruments have stopped playing but the air is still resonant with their sound waves, oscillating, crushing into one another, canceling out each other, slowing down and eventually vanishing.

Slowly sailing through the looking glass, her visuals transport one to an alternate universe, a different dimension. It is as if the mighty hands of the cosmic clock have somehow slowed down and come to a halt. In her small canvases, the spaces are devoid of inhabitants, clothes still hanging on the hooks, pots and pans and tables all set to serve. Beds made soft and warm, aglow with light emanating from gently whirring heaters. But no one is home for food or rest at this nurturing abode.

The images seem thin, floating like a wisp of cloud. It feels as though you are looking at the painting or rendering of time itself, quivering just so slightly, sloppy and vast like an eternal ocean. They offer a glimpse through the third eye, providing a perception beyond ordinary sight. The spaces without its people, barren but still haunted by their existence.

The artist of these tiny domestic paintings is Zoha Khan, who graduated from NCA in 2011. ‘Interlude’ is her first solo exhibition at Color Gallery, Lahore. The exhibition consists of small-sized wooden panels, mostly paired together and painted in acrylics, pen, ink and photo transfers, contained in hollow frames. Her work is multifaceted in ways visual and conceptual. A closer look at her work reveals the lyrical connection between the title and technique. The title ‘interlude’ is a middle-English word derived from Latin ‘ interludus’. In the 17th century, it was used for short time intervals between acts of a play and by 18th century for any intervening time between time, space or events. It also referred to the short musicals between acts in theaters and was extensively used in European Renaissance drama. Her surfaces have the feel, luminosity and texture of an early Renaissance painting technique as well; something like the egg tempera.

Zoha Khan’s colour palette is rich and vibrant, brimming with life without any living figures in them. Her paintings have a peculiar linear, somewhat jewel-like luminosity to them. The technique of layering coats of colours, juxtaposed with mixed media has made the work visually delectable.

Zoha has worked on much larger canvasses in the past and has done mostly figurative paintings. This series is a drastic deviation from her previous work. She explains that she had taken up photography after her Degree Show in 2011 and used to randomly capture moments and spaces, which she found interesting. Not surprisingly then, photography had a major impact on her earlier work and continues to influence her present endeavors including this series. Susan Sontag explains this link of photography with the pictorial memory or documentation as: “All photographs are memento mori. To take a photograph is to participate in another’s mortality, vulnerability, mutability. Precisely by slicing out this moment and freezing it, all photographs testify to time’s relentless melt.”

Zoha Khan has effectively taken out those moments. Bright yet silent, empty areas from the everyday ordinary spaces photographed and transferred into paintings. Some of those moments have striking truths and deeper meanings. The living spaces of the elite, middle class and the lower class are shown, side by side, in no particular order. She points out the class difference evident in our society, very well stratified by a rigid caste system determined by birth, but does so in a manner subtle yet bold. Spaces belonging to different classes are equally treated in their visual capacities and requirements. They are celebrated with subtle hints of irony embedded in colour’s associations with content and context. The artist has observed, pointed out, studied and dealt with realities in her own peculiar way. She has raised and simultaneously replied to questions about the notions about the passage of time in multiple spaces. Regardless of how brutal one moment may be, however filled with grief or pain or fear, time perpetually flows through all lives equally.

Zoha Khan is currently teaching art to young children, which is reflected in her art as well. Her constant interaction with young unadulterated minds has helped her develop a childlike honesty, innocent observation, purity of thought and unbiased, unprejudiced outlook towards life – and art.

Umena Nazish is a visual artist and writer based in Lahore.