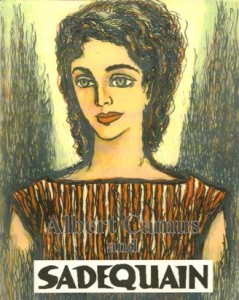 Through his four decades of active work, Sadequain made hundreds of paintings, executed several murals and wrote thousands of quatrains. Most people familiar with his life are aware of these aspects of the artist but lesser known is the fact that he also created several illustrations for book covers. For centuries artists have been commissioned for book covers but few have been as prolific as Sadequain. In fact his proclivity towards the art form added a whole new dimension to the overall oeuvre and led to several people asking him for an illustration for their book covers.

Sadequain’s connection with art covers could have come from his native Amroha, now in Uttar Pradesh, India. There calligraphers and artists would lovingly create book covers for the various manuscripts being produced by the writers and poets of Amroha and neighboring towns. He made his first book cover for a publication that featured his eulogies for his young sister who had passed away young. The marsia he wrote for her was published in January, 1949 and it was doubly poignant that his painting was on the cover and showed his deep love for his family.

Then in the early 1960s Sadequain traveled to Paris for a lengthy sojourn where he was given the Laureate de Paris award in 1961. Paris with its centuries-old art scene appealed to him and the lovingly painted book covers with original prints reconnected him with the culture of his youth. In Paris he took a temporary departure from his regular working style of paintings and murals and illustrated a number of publications. The six years in Paris gave him a lot of opportunities to hone his style in book prints. Key among them was his collaboration with Nobel Laureate Albert Camus who asked him to illustrate his literary masterpiece The Stranger. Sadequain made a set of color and black-and-white lithographs that accompanied a special edition of the novel.

Sadequain’s work in Paris was received very well and when he came back to Pakistan he was inundated with requests to make original works for book covers and other literary projects. Working for free he would happily execute a drawing based on the shortest of summaries often working with whatever material he had on hand: pen, marker or brush. Soon word got around and people would come from afar to get an original Sadequain work for their books. His versatility, command over different literary forms, accessibility and prolificity made him a natural choice for people who made a beeline for him wherever he would be found.

In India a man came to visit Sadequain when he was staying with his cousin in Delhi during the early 1980s. He was a Hindu and greatly impressed with the artist’s work. He also knew that Sadequain had created several paintings in India including murals at places such as India’s National Geographical Research Institute in Hyderabad and Banaras Hindu University. After pleasantries he told Sadequain that he is a poet and requested that the artist design a cover for a book that will feature his poetry. Sadequain in his usual magnanimous style readily agreed after making an illustration asked when the book is likely to be published. Pat came the response, “I am not sure when I will write the poetry Sadequain but I heard you never say no to a request so I came to get an illustration done just in case.” This incident illustrates two things, the first one being that Sadequain was very generous in granting requests for paintings or book covers and that people were too ready to take advantage of his generosity.

There were two ways in which his works would be on book covers. The first way was original illustrations made by him on the book’s subject. Parveen Shakir’s first book of poetry “Khushboo” was adorned with a Sadequain original because his nephew Sultan Ahmed was a university friend of hers and took the poetess to his uncle for an illustration. The earliest edition was thus unique for being the launch of an exemplary literary figure who was recognized right at the onset by an artistic genius.

The second was when a painting of his would be used as the illustration on book cover. The painting had not been drawn from a literal perspective but so wide was his repertoire that a work would be used that fit the book’s subject matter perfectly. The trend started within his lifetime and continued after his death. For example, Dr. Sarfaraz Khan Niazi’s book “Love Sonnets of Ghalib” covers translations and explanations of Mirza Ghalib’s romantic poetry but has a Sadequain painting on its cover. The painting is actually an illustration of Ghalib’s poetry that Sadequain made decades back and considered part of his “Ghalib Series”. Dr. Niazi made a request to Sultan Ahmed Naqvi and a suitable painting was used for his publication.

Over the years many people have used Sadequain paintings for their book covers but the danger lies in not knowing the difference between fake and genuine works. There are hundreds of fakes being produced every year and unscrupulous or unsuspecting publishers use them without background checks. This promulgates the fake painting and also casts a shadow on the book, endangering the writer and publisher. The other problem is people using a painting for a book cover without due process, approvals and acknowledgement. Both cases can create problems and it us up to lovers of art and who hold Sadequain in high regard to curb these practices.