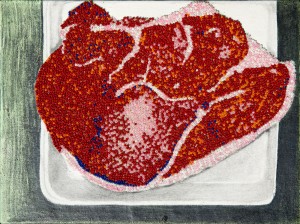 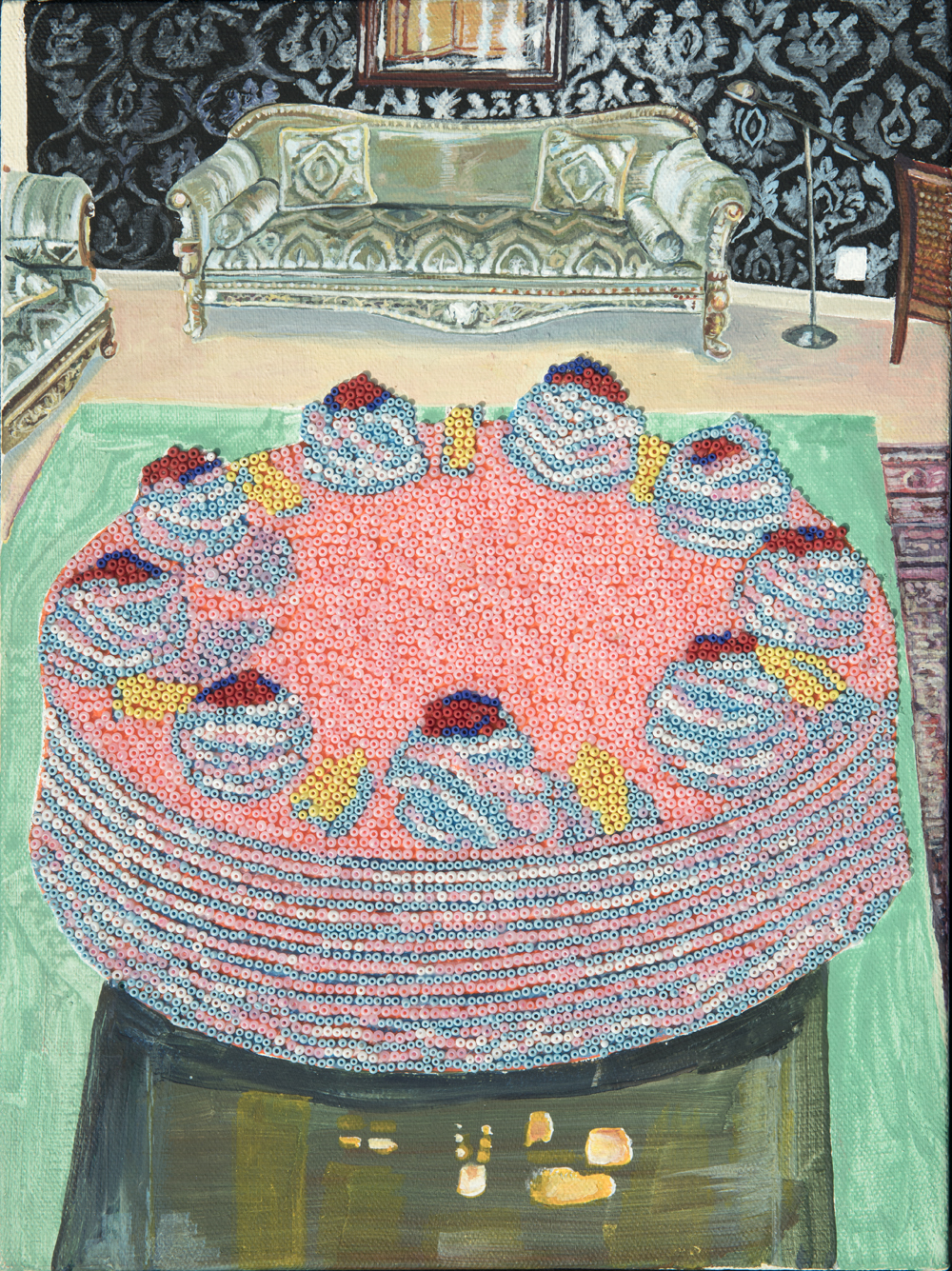 Saba Khan’s canvases are barely visible. Quietly embedded under the heady and heavy materials she uses to construct her images, paint, although present, is not the lead performer within these frames. While a painterly approach is immediately recognizable in her treatment of the picture plane, and the peculiar figure ground relations that structure her images, her material is culled from popular ornamental taste. Faux crystals, beads, and other sharply glistening sediment settle at the façade of her works, apparently still and yet simultaneously loud. These materials are both industrially produced out of synthetic plastics and are painstakingly assembled by hand into patterns and pictures. It is also interesting to imagine the life of one such ornamental crystal from its birth in perhaps China, to its journey spanning miles to wholesale markets in Shah Alami, to maybe a smarter looking shop over lit with energy savers in Liberty Market, to the artist’s studio and suddenly bloating in economic and cultural value, across a painting in an art gallery. In a way its use is a testament to the supposed individualism of art and craft, as negotiated by a modernity faced with the exhaustion of productivity. Khan’s content is similarly related, where she grapples with received notions of tradition, beauty and urban utopia to create hybrids that mock the very idea of good taste.

Khan’s work, thus, raises a twofold question. Firstly, we are asked to consider whether the use of paint is necessary for grappling with problems proposed by the use of paint: Is it possible to be a painter in disregard of medium specificity? If yes, then automatically it follows that it is also possible to be faithful entirely to a singular medium and yet not be concerned with its self-reflective dynamics, i.e. to paint without identifying with the role of a painter.

Khan’s images are hallucinogenic mirages of affluence and ingestion, particular to a privileged social class. Creamed pastries and cakes are as bloated as chunks of ripe red meat, making the two seemingly interchangeable. These evoke an impression of sensuous over-satiation playing upon the tug between desire and repulsion – an image that is further strengthened by the tactility and saturation of the works that once hung upon a gallery wall must evade touch.

Moreover, the homes that Khan constructs on paper, have counterparts in the urban landscape of Lahore. Often of a part of mushrooming housing schemes, and gated communities, these buildings use aesthetics of haphazard assembly and cheaply available industrial material, appearing to be not unlike toy houses. These buildings are also a direct manifestation of skewed urban policies that under the guise of progress and ‘development’ sell a material paradise to citizens. This paradise is at once familiar (desi) and exotic. Dotted by tropical palms and creolized expressions of multinational consumption (Al-Najam Fried Chicken), it enables gluttony and glaring socio-economic rifts to wear chaste garments and thus appear matter-of-fact or unproblematic.

Khan lays bare the anatomy of these homes and despite the absence of any characters, chalks out their ambitions as well as delusions. Notions, not just of class but also of gender, security and conformity are all quietly embedded in these images. The moment at which a viewer identifies an attempt at a ‘perfect’ home is the very moment in which the impossibility of it becomes obvious and the absurdity of this aspiration becomes comic. Khan’s use of text, of hashtags and transliterated signage is similarly humorous whereby English words in Urdu script automatically acquire an accent, throwing into relief the contradictions posed by the lack of an absolute transformation as well as the socio-economic value accorded to the ability to switch between Urdu and English painlessly. This is the same strand of humor which enables a class to laugh at the popular actress Meera or the Pakistani Cricket Team’s scaling of English.

Seen thus, in a beaded mosaic of saturated color that may, from afar, be mistaken for pixels across a glowing screen, Khan’s images seem to be a simulation of a crazed imagination, hyperaware of the fault lines built into a contemporary urban experience in Pakistan. She gives a nonchalant peek into the lives of a certain class and their aspirations to thoroughly belong to that class using a home as a vessel or a ticket for entry. These homes are propped upright on the strength of the bubble they create and in Khan’s ominous images, the ‘pop’ may be shortly imminent.

Madyha Leghari is a visual artist, writer and a graduate in Fine Arts from the National College of Arts. She lives in Lahore.