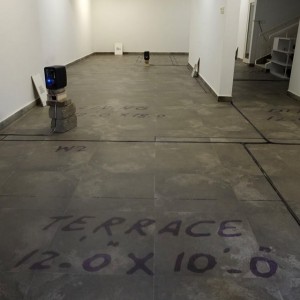 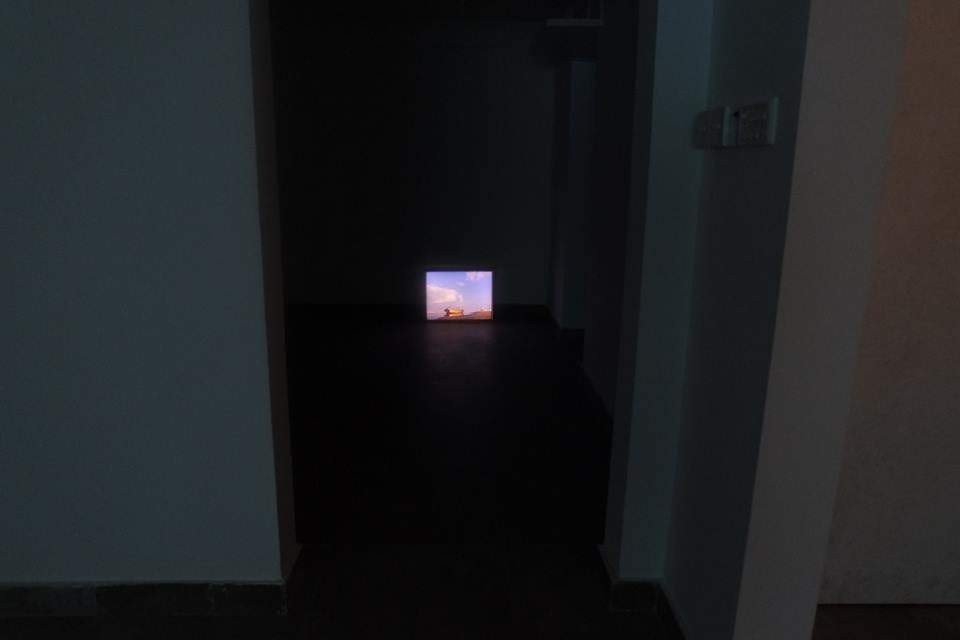 The rhythms and proportions of the city are in a perpetual state of motion. Always unfinished, never stagnant, mobilized by the quest for it’s intended shape. Ultimate completion is a senile state, an obtuse log hindering the fluid state of continuity. Seeking reconciliation in unfinished forms is almost like standing poised on a stagnant tide, awaiting the moment of the climax. Romanticizing the anticipation of it. Withdrawing one’s self to the fluid aspirations of evolution, and finding recourse in theorizing it.

Yaminay Chaudhri’s recent exhibition at Gandhara Art Gallery titled Rooms Are Never Finished tackled the shrinking coastline of Seaview through the lens of the occupants of Darakshan Township and their stories of renovation. She tackles the acquisition of public space through an intimate introspection and addresses questions of displaced urban geographies through poetic ambition. Chaudhri subtly invokes the the resting symmetry and quarreling asymmetry given the complicit withdrawal towards the shifting urban geographies.

The gallery space had been held captive to the intimate plan of a Type C Villa from Darakshan Township. Rendering space itself as subject, Chaudhri resigned the floor as a docile camouflage. The gallery floor masquerading as a domestic space. The columns and walls of the gallery displaced against the floor plan. Through this acquisition Darakshan reclines into a febrile state, it almost becomes a portable entity carrying the laments of it’s residents. It plays at a meticulous dichotomy of acquisition and complacence. A home in Darakshan momentarily held hostage within a gallery; an almost fluid state marred by it’s docile submission. Almost like an interruption of sorts. The imposition of another archetype casts a state of uncertainty, it almost resigns as a territorial aspiration, bound to the geometry of the gallery space, yet unhinged by it’s state of absence.

The city grows, like a perforated mass, spilling into the seas, building vertically, clamoring horizontally,a moment of sigh reclines into a state of whisper. Chaudhri looks into the urban renewal of the city and laments the loss of public space.

As we took our Imaginary walk along seaview, we shuffled to glimpse into the wordscapes. A restless solitude nimbly reclining against the placid tales of inanimate objects. Voyeuristically scavenging for words held on tripods. Of salt, and half-bitten almonds, of men in pink trousseau and tides hinged against the coast, of boiled eggs and opaque hedges. Chaudhri’s words meticulously craft the restless whimsy of the beach. Strung together in a moment of repose, straddled upon metal structures, it held the wind and smoke dormant.

their red and white squares, rounds and ovals

Chaudhri resigns the silhouettes of homes into unidentifiable walls. The appear like hung shadows awaiting their martyrdom towards misguided urban aspirations. The shifting breath of the city carries with it the tales of it’s residents. As the city evolves, they are forced to evolve as well. Public spaces are reclaimed. Chaudhris examination of such changes is intimate and profoundly strung with the acquisition of the gallery space. Oscillating between the metaphysical and the real, one almost voluntarily reclines into a state of unanimous congress with the fluid nature of spaces and their perpetual unfinished-ness. Like a choir Darakshan Townships sings with continuous hiccups, it’s fate bound to the shrinking seas.

As viewers bound to a state of voyeurism and introspection we search for hidden words to find recourse in the state of continuity. The ghosts of lost spaces chasing us as we string together poetic words conjured by the sea. Risking romanticism for the sake of withdrawal. Unperturbed the absence and presence of Darakshan Township, even as we walk along the corridors of its shadow on the gallery space.

Chaudhri’s concept of space itself is a meticulous exploration; her use of space as a medium is astute, and the congenial use of the word ‘imaginary’ itself plays at a delirious paradox. She gathers moments of frigid countenance and placid appraisal as we sit like sequins upon the ghost of Darakshan. Her explorations hung like a veil of untold tales, receding and emerging as apparitions of the absent and the present..

She categorically displaces the home and repurposes it to craft a sentiment that contours within the walls and catapults into a state of romantic oblivion. It allows one to introspect and lament on the changing scape of the city. It undulates and convulses with passive resignation, much like the city as she breathes while she chisels herself into shapes. Chaudhri’s works addresses the perils of unimaginable geographies and seduces us through her exquisite wordsmanship. She digresses upon the changing underwater ecologies as land is reclaimed, she captures the perils of the shrinking coast through Darakshan’s residents offering an allegorical rendition of obscured realities beneath the shifting sands. She finds poetic retribution through her articulation and surmises into a docile state of disparate undulation.

Perhaps through reconciling with incompletion one finds allegorical retribution in the city as a fluid space. One wonders in earnest of the uncertain geographies of the city..perhaps in a finished room lies a salvation that can only be marked by the end of human conquest. The economy of Seaview and it’s ecosystem is uncertain much like the residents of Darakshan Township, the city strings along as she erases and draws over the existing geographies. Like confessions of a lover written on sand, faded by the unblinking tides.

8 Responses to Rooms Are Never Finished