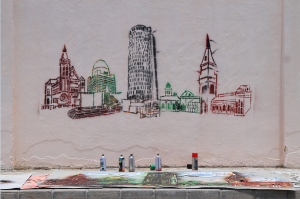 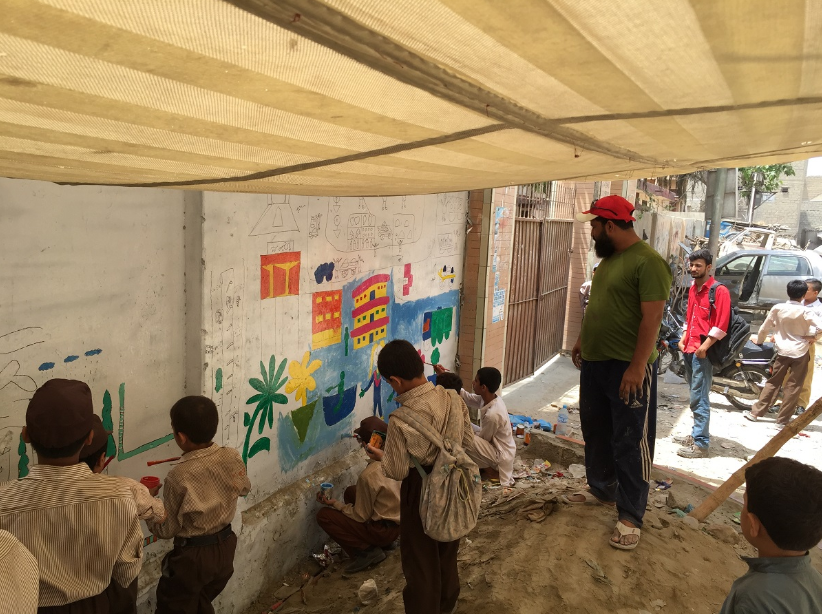 Roadside Walls as Canvases and Blackboards

Many public walls in Karachi are covered in hate graffiti against ethnic groups, wall chalking of political party slogans and unauthorized advertisement graphics. Bus stops, heritage sites, parks, building boundaries, side-walks of main roads, underpasses and flyovers are some of the most common places to publicize these mass messages.

In response, a team from I Am Karachi and the Department of Fine Art at the Indus Valley School of Art and Architecture set off to “Re-Imagin[e] the Walls of Karachi”. The collaboration was initiated to engage the community to replace hostile wall chalking with images advocating “peace and tolerance” on almost two thousand walls around the city. Coordinated by Adeela Suleman, Head of the Department of Fine Art at Indus (and accompanied by a group of cultural practitioners, visual artists, art educators, billboard and truck art painters, college students and school children), the project aimed to erase aggressive and “adverse images” on Karachi roadside walls by painting over them.

The core objective of this community-based art initiative was to creatively reclaim these public spaces. It was a city-wide measure to tackle the graphic negativity and replace it with images embodying positivity, unity and peace through a creative interpretation of visual culture. The three-pronged project – The Stencil Art Project, Wall Project with Children (Bachoon say Tabdeeli) and Individual Artists Project – enabled individuals to engage with the city and generate a dialogue through visual communication over a period of three months.

Being the devil’s advocate, one could say that freedom of speech is everyone’s right ,and hate graffiti or wall chalking could also serve as a soft therapy or catharsis for people to vent out their conflicts and political reservations through visual expression. However, Suleman holds that, freedom of expression or the right to talk your mind comes with a responsibility – one ought to be conscientious for the repercussions that follow and be judicious while recklessly “vomiting” or displaying your qualms. Individuals of a community tend to subtlety internalize the attributes of the signifier and the signified in a sensory/ visual culture.

Spearheaded by Munawar Ali Syed, The Stencil Art Project engaged craftspeople, professional signboard and graffiti painters and visual artists. Fifteen participants, including professionals and students from Karachi University, Karachi School of Arts, IBA, Department of Visual Studies, KU and Indus Valley School of Art and Architecture, proposed images that were transferred on street walls with seventeen stencils. Through a guerrilla movement, covering almost fifteen hundred walls across major Shah Rahs, Munawar and his team applied base-coats on the wall surfaces, prepared stencils and spray painted images of pop culture icons through the intricately cut stencils. Amusingly, some of the primed walls were used by Volta Battery advertisements! The art activity (on M.T. Khan Road, Old Sabzi Mandi to Civic Center, NLC Building (near Gora Qabristan), Kala Pull (National Hospital Signal), M.A, Jinnah Road, Nipa, Tower Area (Saddar), Sohrab Kot, Liaqtabad, Gulshan-e-Iqbal and Gulistaan-e-Johar generated much interaction and excitement amongst the public, pedestrians and passing vehicless. Syed’s prime intention was to engage public through the arts and initiate dialogues, amongst the art community and general public, about the significance of this occupation. On various occasions, he rejoiced over the overwhelming number of ‘hits’ and ‘likes’ received by social media users and print media coverage over the event.

In The Individual Artist-led Project, coordinated by Adeela Suleman, visual artists from Karachi proposed ideas for individual walls on MT Khan Road and Port Grand. The sites turned into pedestrian galleries where people were interested enough to stop and view the imagery. The visuals become active signifiers and identifiers of the zeitgeist.

Suleman shared that the visuals were screened in order not to target religious or political parties. The imagery was eclectic, yet neutral and safe. The agenda for this particular project, she added, was to beautify and add aesthetic value to the urban scape of Karachi. Such cultural activities bridged gaps and facilitated conversations that were consequential and productive. The Customs Office, PTCL and KPT were keen to have similar paintings on their company walls as well. Suleman holds that even if a few mindsets changed positively, it would be an accomplishment. She sees the initiative growing into something even larger and momentous, one that prioritizes indigenous, suburban aesthetics and cultural well-being.

The third slice of the project, Wall Project with Children, is the extension of an on-going creative-education initiative, Bachon se Tabdeeli (Making a Difference through Children) led by art educator Shahana Rajani and myself. Our team has reinterpreted drawings made by children from three suburban localities of Karachi (Shireen Jinnah Colony, Lyari and Kemari). The work evolved through a series of art workshops (conducted earlier as a pilot project, under the same initiative) that helped public school children to understand and visualize their engagement with public spaces. The purpose of this education initiative was to highlight children’s role as dynamic agents and advocates in society who actively produce and make use of spaces in their vicinity.Children practiced imaginative drawing and mapmaking, and their works were then enlarged and recreated on large public walls in collaboration with Gulraiz Khan, a professional billboard painter and visual artist. Through this process, children gradually discovered the potential functions of communal places, identified spaces for play and friendship and celebrated experiences of cultural diversity in their respective regions. They also reflected on the socio-environmental issues affecting public spaces. A fifteen-year-old school boy from Boys Government Primary School, Shireen Jinnah Colony, said, “Hum apna waqt kisi khoobsurat taameri kaam mein laga rahay hain” . Another 10-year old boy from the same school talked about his painting and mapmaking experiences, “Mein akela kabhi bhi itni bari dewaar nahi kar sakta tha. Hum mil kar bohat baray baray kaam kar saktey hain”.

Amidst political antagonism, strikes and religious sectarianism, the “modus operandi” was also strategic. The participants were advised not to stay at one place for long. The Commissioner of Karachi Office and DMC South Office and KMC approved the images and made selections for some walls subsequently. One of the core objectives was to cater to a range of aesthetic sensibilities. The artists became creative crusaders (no pun-intended); their creative expression evolved as cognitive, aesthetic and emotional tools for people to observe, feel and reflect alike; community engagement was at the core. Visual communication was inclusive,diverse and beyond artistic barriers. It steered its way smoothly, making art practice a tad more meaningful and rewarding.