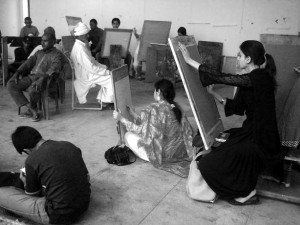 Writing about art schools at the time when the national budget for the year 2013-14 has just been announced marks a significant moment to deliberate on some key issues engulfing education in Pakistan. Needless to say, the national budget followed its historical precedence by not giving much consideration to education and any future planning. Rather than acknowledging the failure of the government in providing quality public sector education to its citizens, instead, it has further levied taxes upon parents who are paying higher fees to private institutions to provide quality education to their children. Moreover, bestowing bright students with free gifts of laptops further endorse the Central Government’s superficial approach and understanding of education. These actions highlight a certain mindset that considers science and technology (only in the material and tangible form of the tools and equipment and not the research and critical inquiry) as the backbone of development in third world countries. Without compromising the value of these important fields in today’s world, I attempt to address some of the key issues regarding art schools and their education in Pakistan. To heighten the complexities in the debate of education in Pakistan, I present the key theme of this article, which is rethinking art schools. When we want to talk about art schools, it is basically to initiate a discourse of much complex debate about what do we mean and how do we understand education in art schools.

There are many aspects of education that comes in mind. Do one approach it with an understanding that it is about pursuit of knowledge and making of students into productive and creative members of society or it is a matter of number game and acquiring degrees only – a key to secure jobs. There is nothing wrong in honing one’s skills for career paths, but then to what extent the education institutes are producing professionals ready to meet the demands in the market and the field, leads one to question the presence of large number of education institutions. Previously and it still continues in the present times that simple BA and MA degrees were adequate enough for jobs in several government institutes of Pakistan. This mindset is rooted in the psyche developed during the British Raj, which produced a class of BA educated people to fill the government departments. In contrast at the same time, few art schools were also established by the British, with Mayo School of Arts (now National College of Arts) in Lahore in 1875 as the last one in this series, in order to gather sons of artisans to train them according to the market requirements of Europe and especially English. With all due critique of the English cannons that were employed in establishing such schools, one do acknowledge the emergence of talented Bhai Ram Singh as a prolific student, who later on became the first Indian principal of Mayo school and designed important buildings of Lahore.

Art schools continued to impart education in both fine/high arts, as well as established skills in several crafts and design and architectural studies. One of the popular saying among teachers of National College of Arts is, ‘a skilled student of NCA will never fear joblessness’. Where art schools have delivered in training majority of students to apply their training in professional life, one questions the relevance of many degree colleges producing herd of educated class without any skill and vocational training, waiting for jobs to be created. In the country like Pakistan, the education policy needs to be carefully drafted by keeping in view the ground realities and strategic thinking, geared towards production and service oriented society rather than making herd of babu class.

But then how are the art schools radically different from other education institutes, in terms of the education and professionalism? And what makes art schools and their education system so significant for society? These questions further raise issues regarding teaching methods, and the curriculums, like, what is the connection of art school with the society it is catering to? And, most importantly, are we ready to rethink and reevaluate the objectives of the courses, and how they are being taught at the school. The art schools are ideally geared towards creating harmony, but the present day system of education lacks links and relationships of students with the land or their immediate environment as part of their total experience while studying at art schools. Rabindranath Tagore, a radical educationist and a poet, envisioned the notion of harmony as, “the highest education is that which does not merely give us information but makes our life in harmony with all existence.” This ideal notion is still pertinent in contemporary sensibility of art education in Pakistan, where one accepts challenges and modify one’s self accordingly.

Tagore gave an alternative model of education with a new methodological approach. Santiniketan, founded by Rabindranath Tagore in 1901 in a small village in West Bengal, comprised of a children school, a university and rural reconstruction center. The art school emerged as an indigenous model based on the experiences of Tagore to address the local aesthetics and knowledge in complete harmony with immediate environment of Bangali landscape. It was also a critical response to colonial mode of education imparted at several art schools in Calcutta, Bombay, and Lahore, which were serving local and English taste both in fine arts and crafts and design. In Santiniketan, singularity of culture was dismissed while different cultures were explored to understand multiple voices in order to interact with people with difference in harmony, a key for peaceful and tolerant living[1]. For him, the key for balanced education was not only in looking deeply and closely at one’s own roots and tradition, but also in embracing contemporary scientific and technological endeavors. Arts including music was an essential part of education at all levels, an idea which even in today’s globalized world seems quite remote for any school or university in Pakistan that offers education in natural sciences and technology, or even the business and management sciences.

How do we then think or to be precise, rethink art schools in present times? To create harmony among the students regarding the land and nature of their immediate social and cultural context was the inherent characteristic of Tagore’s model. Tagore’s statement, “we rob the child of his earth to teach him geography, of language to teach him grammar”, would be significant marker for analyzing to what extent contemporary art schools are imparting knowledge of ‘land’ and ‘language’ and are not trapped in the formalist structures. The students and graduates of art schools are designing products with ‘ethnic’ elements, a mere decoration on the surface, like chicks (reeds and bamboo blinds), curtains, bed spreads, pottery as well as architectural design, with little attention to design development. Obviously generally education at art schools is insufficient to equip students with necessary research tools, skills and abilities to integrate their design with their social and cultural context. When the potters of this region have achieved the simple and perfect shape of pottery over the centuries – a result of cultural harmony and social structures of craftsman’s village – what new challenges are posed in making pottery integrated with the contemporary aesthetics? Rather then merely copying arches, or making façade decorations for an ethnic look, the contemporary architecture fails to cater to climate conditions of the land. Similarly, environment friendly techniques and technology has already been explored and experimented in the old architecture of this region, like old houses in Haiderabad with perfect ventilation, and veranda system. The question remains why then it is so difficult for contemporary designers/architects to formulate design, which are both contemporary in form and material and yet practical. In rethinking art schools one needs to find out this obvious lack as a core problem in the curriculum design or overall objectives of the courses. The general discourse in art schools is loaded with debates of tradition versus modernity, while research culture is missing altogether. As Paulo Freire, a renowned and radical educationist stated in Pedagogy of Freedom, “there is no such thing as teaching without research and research without teaching,” art schools’ curriculum needs to rethink how to inculcate research culture as an integral component of teaching. It is very important that student understand the core meaning of what is a good design and/or how to integrate a good design in one’s society.[2]

Another very important part of education in art schools is self-motivation. Amartya Sen argues, “Emphasis (at Santiniketan) here was on self-motivation rather than on discipline, and on fostering intellectual curiosity rather than competitive excellence.”[3] At certain level the total experience of working and operating at art schools is merely to achieve certain percentages in the final exam and the not the actual understanding of the subject at large. The absence of self-motivation has resulted in stricter rules to regulate class disciplines and mere attendance marking. In the absence of feeling connected with one’s environment with strong motivation, it is not possible to enable students to respond to above-mentioned challenges in design and architecture. What kinds of individuals are being produced in these schools is another question. The art schools are producing fine artists with great repute aspiring to enter international market, but to what extent local is considered at any level? Are they able to contextualize their practices in their given environments, or only responding to their immediate context for an international audience. How do the art schools help artists develop their links with local environment, to integrate with social fabric of society, is another critical enquiry.

Where lie the answers to all these issues? The self-reflection and critical thinking should be the basis of education being imparted at art schools. The art schools specifically plan their curriculum to locate the art and design practice within the sociology and the cultural context for these students so that they are equipped to find solutions with much more informed and critical mind. As Pualo Freire aptly argued, “those who fear dialogue prefer lengthy and erudite discourses full of quotations. Instead of problem-posing dialogue they prefer a so-called “reading-control.” In rethinking art schools, one needs to revise the approach, which generates critical and analytical abilities, a necessary tool for research practice and not mere copying of decorative elements. Freire further elaborates,

Such educators have no wish to run the risk of adventuring into dialogue….dialogue awakens an awareness. Within dialogue and problem-posing educator-educatee and educatee-educator go forward to develop a critical attitude. The result of this is the perception of the interplay of knowledge and all its adjunct. This knowledge reflects the world; reflects human beings in and with the world explaining the world. Even more important it reflects having to justify their transformation of the world.[4]

To conclude with the above profound statement, I would reiterate that neither taxes on fees nor laptop gifts would provide solutions. It is the overall harmonized approach that generates equilibrium and tolerance with the immediate landscape and social realities, which is important for students understanding. As long as there is debate and argument and a critical discourse is generated, art schools will continue to offer solutions informed by social and cultural sensibility.

[2] Gwendolyn Kulick, in communication with author in June 2013.