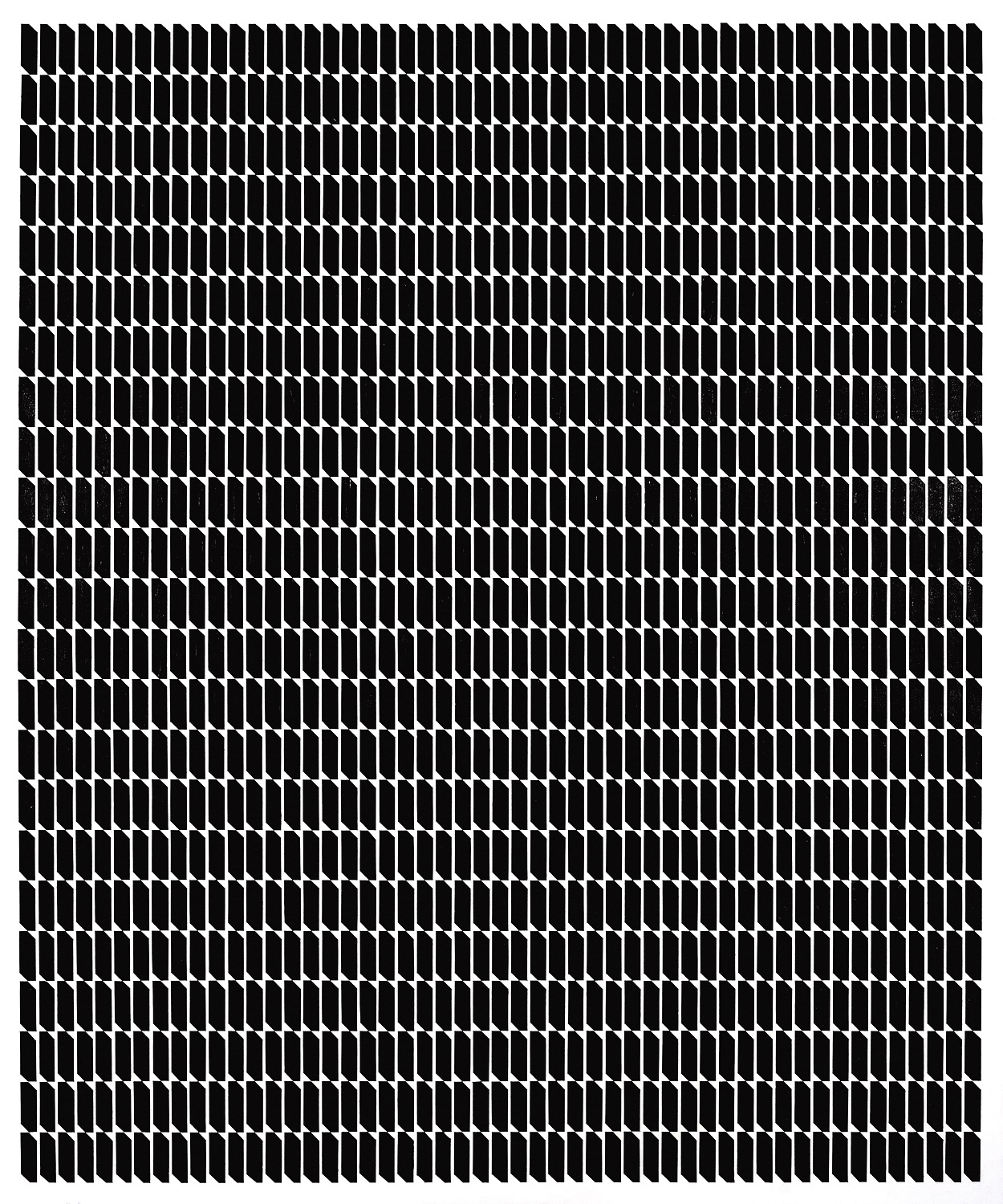 Mohammad Ali Talpur’s work deals with the matters of the heart and not with the eye. It is the inner vision, the vision that only the heart can perceive for the eyes have a limited vision. This delves deep into Islam’s philosophy and consequently its spirituality. To give a mere visual description of Talpur’s work and to only speak in context to calligraphy or categorizing it in minimalism, opt art or abstract impressionism and even placing it in a political and social setting  is an understatement and injustice to the body of the work. For in this artist’s case the body meets the soul.  So how do we really read this artist’s work? The answer is we do not. It is illegible and unreadable. It is a pictorial vocabulary that the mystery and the secret are alone with the artist, he enjoys and derives peace and serenity from it and wishes not to be in that game of chess where he needs to prove anything to anyone. Talpur works for himself when the viewer is left only to be enchanted and utterly spell-bound by its power of seduction.

So how about we go back to where Talpur begins talking about his childhood, in an interview with Aasim Akhtar in 2010 for the (The News on Sunday, (TNS) Mohammad Ali Talpur Says,

“Until matriculation, I had no exposure to art per se; nor of visiting an art gallery. My biggest fascination was to travel with my mother on bus to Hyderabad or to Tando Allah Yar. All I wanted to be was a bus conductor who gets to travel long distance and collects money.”

It is clear to see the artist always had a dream to travel long distances, and this entails unknown and new places. A traveller’s mind is an intriguing one, and when combined with an artist’s heart it becomes a mystical enterprise. This combination of the heart and the mind in Arabic is known as “Qalb,” meaning “Intellect.” Qalb in Islam’s philosophy and the sacred text is not synonymous of the human heart; it is actually a mechanism which encompasses the faculty of the mind and the heart together working towards mysticism. As stated in the Holy Quran,

“Do they not travel through the land, so that their hearts and minds (Qaloob) may thus learn wisdom and their ears may thus learn to hear? Truly it is not the eyes that are blind but the hearts (Qaloob) which are in their breasts.” (22:46)

Talpur by just sitting in his studio and formulating this myriad of lines, dashes and strokes, in a repeated motion almost cathartic, takes himself to a far off distant place which is the onset of meditation. So there is one which is, travelling by physically and then there is another form of travelling and this requires no visa or passports. This is walking into an abyss of the Unlimited and the Boundless, literally to point where the artist’s repetitive singular lines when forms a cluster it is in fact immeasurable and countless in nature.  Talpur’s complex yet appearing to be simple grid works are large canvases painted in stark black and white bold strokes. They create a mirage that on a closer view pulsates and breathes. The viewer even more so only by looking at these images is set in a trance and travels somewhat in the same way or to the same place where the whirling dervish in Sufism connects. It is the realms of the unknown, the Infinite and the Sublime.

The segregation of the works at this solo exhibition is one of the rather huge canvases with a certain scheme of lines maneuvering and intersecting across white canvases, and the other are letters illegible hand-written with brush and ink on paper and on the surface appearing to be of one of the styles in South Asian Calligraphy, but really it is a delusion and entails no real letter, it twists and turns formulating a letter in its initial or at its last stage. Some letters are left mid-way, with sharp and crisp edges to it. So now there is a letter but without a meaning.

Even in Islam philosophy and in the Scared Text there are a few letters that no human mind can interpret, the knowledge of which is alone with the Supreme Entity, it is the” Lohe Qurani. “People often hang it onto the walls in their offices and homes to only reflect upon and receive peace and blessings from the letters that they do not know the meaning of.  Some people also recite and mediate the Holy Text without any translations just to feel its intensity and the power of the language of the Prophets.

Do we really need a meaning to everything, should everything be a representation of something, or is it that there is nothing pointless, or without a purpose in this world, should man remain in the eternal quest to decipher everything? Maybe all is true for in this world but not in the world above that no human eye has seen, and if seen has never come back from and told us any details of. This is the space, sequence, rhythm and harmony of that world above us that is created unconditionally by Talpur’s repetition of a single unit of a line called “Alif” his earlier work shown in Delhi last year at the Latitude 28. The works on display here in Lahore is an extension of those earlier works with a major transition toward relief form once again after the 2008 Dubai Art fair Sculptural artwork. This transition is through the Marble Slab Drawings. Some works have miraculous powers like that of Mark Rothko’s, perhaps Pakistan has an artist named Mohammed Ali Talpur from Hyderabad, Sindh based in Lahore that possess similar qualities as Mark Rothko and who is to say maybe a little more.

Images courtesy of the artist.